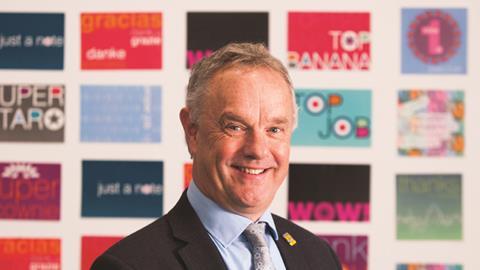 Stephens Scown’s managing partner explains why the ‘John Lewis’ law firm is one of the country’s best employers.

Robert Camp, managing partner of award-winning south-west firm Stephens Scown, has travelled far in his 30-year career. He was a commercial property lawyer in Hong Kong when, in 1989, the Tiananmen Square massacre ‘crashed’ the market. He moved on to Sydney, where he picked up an interest in mining and minerals which endures today. After 15 months in Australia, he returned to London and from there, in 1992, moved to Stephens Scown, a firm with offices in Exeter, Truro and St Austell.

Camp became managing partner in 2011, since when he has pioneered a succession of innovations, including a John Lewis-style shared ownership model. Just last month the firm won a Law Society Excellence Award for excellence in marketing and communications, while earlier this year it was ranked 12th in The Sunday Times annual 100 Best Companies to Work For survey.

The interview starts with the ‘best and scariest thing’ he has ever done, namely Harvard Law School’s leadership in law firms (LLF) programme, a six-day intensive course that he enrolled upon when first asked to become managing partner. The LLF focuses on balancing professional and commercial responsibilities, strategic planning, managing growth and change, and motivating people. Crucially, it uses business school-style case histories written specifically about lawyers and law firms.

‘As lawyers,’ Camp says, ‘we need outside input because we are not trained as business people. The qualification route [to becoming a solicitor] only pays lip service to running a business. The LLF was fantastic. I found myself, a partner of a firm with three offices in south-west England, on the same course as magic circle and Wall Street firms. But then we all have the same problems – just on a different scale.’

The decision to seek management training was prompted in part by Camp’s predecessor, a non-lawyer chief executive who ‘opened our eyes to running a law firm as a business, not only as a profession’. The firm would continue to benefit, Camp says, from an outsider’s perspective that would ‘challenge’ preconceptions, while also providing commercially focused ‘support’. The strategy seems to have worked. The firm’s turnover has increased by more than 40% since Camp assumed the mantle of managing partner.

He continued to be head of the mining and minerals team when he first became managing partner. ‘The firm was founded 80 years ago on the back of [people from] the clay mining industry,’ Camp explains, ‘and mining has been an important part of our practice ever since.’ More recently, Stephens Scown was instructed by Wolf Minerals, a specialty metals company that was planning to invest £130m in opening Drakelands, near Plymouth, the UK’s first new metal mine for 45 years. Drakelands began production in 2015 and employs around 200 people. It is expected to produce 20% of the western world’s tungsten needs.

Camp ‘reluctantly’ stood down as head of the mining and minerals team some 15 months after becoming managing partner. ‘I tried to do both jobs,’ he says, ‘but realised that I had to give up fee-earning entirely if we were going to achieve what we wanted to achieve.’

What was the springboard to achieving his aims? ‘A major part of our success arose from carrying out an anonymised staff survey that spotlighted two issues of concern – internal communications and partner behaviour,’ he says. ‘We had previously thought that we were strong on internal communications because we were putting out lots of information, but the survey told us that staff didn’t just want to hear the “what”, they also wanted to hear the “why”. So I now regularly leave the Exeter office to visit the St Austell and Truro offices to explain investment decisions, for example. Or I tell staff that we need £1m every month just to pay wages, which is why it is important to chase that unpaid bill – we need it.’

The Gazette asks whether the second issue revealed by the survey, partner behaviour, required delicate diplomatic skills to address. Camp responds that the issue was simply that some partners had a ‘somewhat distant attitude to other staff’, whereas the ethos he was keen to promote was one of everyone working to the same end, irrespective of their seniority. This end, he adds, is summarised in the firm’s Values and Behaviours booklet.

Camp chooses to focus on excellent client service. ‘We have shot ourselves in the foot, in residential conveyancing especially, by allowing a “race to the bottom”,’ he says. ‘We can’t compete with “Tesco Law” on how much it spends on IT, people and marketing, but we can beat it on client service.’

He points to two initiatives aimed at fostering exceptional client service. One is the introduction of ‘positive postcards’, which staff are encouraged to send to a colleague who has done something extraordinary. ‘It took months for staff and partners to embrace the practice,’ Camp says, ‘but the cards are now recognised as a way of acknowledging excellent client care.’

The second initiative borrows from US fashion retailer Nordstrom’s habit of collecting ‘Nordy Stories’ about how members of staff have gone beyond the call of duty in providing client service. ‘We call ours Scowny Stories,’ Camp says. ‘They give concrete examples to show employees and new recruits exactly how good customer service is given.’

He turns next to the shared ownership scheme which began in May 2016. This is intended to foster greater staff engagement by giving everyone, again irrespective of their position within the firm, an equal share of the profits. The scheme revolves around a new company, Stephens Scown Limited, which operates as a member of the partnership. The company is empowered to share, equally among all members of staff, half of the outstanding profits left after salaries and bonuses are paid. The other half of the profits is retained by the firm. The scheme was agreed with the Solicitors Regulation Authority and HMRC, and took nearly three years of planning before its launch.

Camp says: ‘No matter what role someone has, we are all part of the same team and it’s important that staff feel that it is their business [and not some abstract entity]. We had perhaps underestimated that particular aspect of staff engagement because we had previously focused on the financial element of the business. I wanted everyone’s remuneration to include an equal sharing of profits. I believe it will have a tremendous impact on the firm. Back-office support staff in particular will feel much more involved as we will all be working towards the same goal.

‘Clients have asked us about the scheme and we know from our graduate recruitment programme that trainees are very interested in it. It’s a continual struggle to get the right people. All the firms down here are fighting for the best candidates and the scheme differentiates us as an innovative firm that values its people.’ Camp believes that Stephens Scown is the largest firm to have implemented such a scheme.

Camp turns to the firm’s remarkable performance in The Sunday Times 100 Best Companies to Work For survey. ‘Two years ago we came 37th,’ he says, ‘and last year we improved our ranking to 12th.’ Stephens Scown was the highest-ranked law firm, with only London firms Mishcon de Reya and Kingsley Napley coming close at 17th and 23rd respectively.

The judges awarded the firm a special award for being best improver. They also commended it for going beyond its specific legal brief by publishing an insider’s guide to the south-west based on staff recommendations. Uniquely, the firm has bought a VW camper van for staff to explore the region. It has been used, so far, at a staff wedding, festivals and a surfing competition.

In the interests of having fun, the firm allocates £45 for each employee to put towards social events, from canoeing to cocktail-making and pizza nights, and it also funds monthly Friday drinks. Finally, the judges were also impressed that, after taking part in singing workshops at last year’s away-day, staff have formed two choirs – the punning Rolling Scowns in Devon and the Scown Roses in Cornwall.

The survey is remarkable in that it is based on staff providing information about their employers anonymously. Almost 250,000 people completed questionnaires for this year’s competition, giving anonymous opinions about their bosses, working conditions and their employers’ values. Categories include quality of leadership, wellbeing, personal growth and how staff feel about their pay and benefits package.

Last month, the firm secured the Law Society’s Excellence in Marketing and Communications award with its Love Where You Live campaign. This campaign supports the firm’s clients and other local businesses by showcasing the great things to enjoy in Devon and Cornwall.

Camp’s own life is by no means all work and no play. He sings with the Exeter office’s Rolling Scowns, which has an ‘eclectic’ repertoire of popular songs from the Beatles through to One Direction. ‘It’s an important part of staff engagement, a real leveller, which sees the managing partner singing with secretaries. But it’s all great fun.’ He confesses: ‘The secretaries are much better singers than me.’ The firm also sponsors clubs for knitting, pilates, running, yoga, reading, art and table tennis, ‘some of which we subsidise, some not’.

Camp ends: ‘It’s all part of our drive towards improved staff engagement. We want everyone involved with the firm, particularly now it’s their firm. There is no more them and us.’