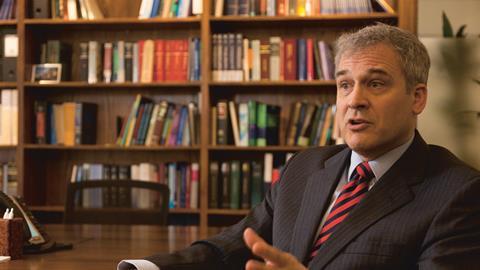 Robert Volterra wants to ‘help make the world a safer place’. That may sound vainglorious, except the solicitor can point to cases where his firm has been instrumental in ‘reducing conflict between states’ and steering them away from war towards a peaceful resolution based upon the rule of law.

Volterra is a public international law (PIL) practitioner. PIL, he explains, has evolved over the centuries in a world where a few dominant sovereign states once held sway, to today, with almost 200 autonomous post-colonial and other nations. Through mutual agreement and compromise among states, he says, PIL has become an independent system of law existing outside and above the legal orders of particular states.

Its core is a complex system of rules, principles and practices which states agree to comply with when dealing with other states, including when in dispute. Volterra’s firm, Volterra Fietta, is the world’s only practice dedicated exclusively to PIL, he adds.

Since its 2011 inception, Volterra Fietta has received instructions from the US, Colombia, Saudi Arabia, Malaysia, Croatia and Barbados. It has also acted for multinationals such as US giant Koch Industries and, closer to home, Eurotunnel. In the last 12 months alone, the firm has dealt with disputes concerning land and maritime boundaries, treaty interpretation, trade and international investment treaties, the law of the sea, state responsibility and international environmental law.

All very impressive – but can PIL practitioners really help avert wars? Volterra gives an example of a dispute he handled between the South American republics of Colombia and Ecuador. The neighbouring states have a history of conflict, having gone to war in 1863 and narrowly avoided a military confrontation in 2008, when Colombian forces killed around 20 FARC guerrillas in a FARC camp just inside Ecuador.

The recent dispute in which Volterra acted is known as the ‘Aerial Herbicide Spraying’ case. Volterra’s client was Colombia, a country in which he worked for a year with a human rights NGO. ‘I got shot at while I was there,’ he says, ‘and the building in which I worked was firebombed on the day I left, but at least I learned how to salsa dance.’

The dispute was initiated by Ecuador. Its neighbour, Colombia, is obliged by treaty to spray herbicide on crops of coca, from which cocaine is derived, as part of its contribution to the ‘war on drugs’. Coca is cultivated mostly in southern Colombia, in particular on the Putumayo River border with Ecuador. The Colombian side of the river is sparsely populated, but the Ecuadorean side has many villages, and some inhabitants complained that the spray had drifted across the river, damaging legitimate crops and injuring people and livestock.

‘Witnesses reported temporary blindness, burning, and even a baby dying,’ Volterra says, ‘and yet on the day in question, no spraying – according to global positioning satellite data – happened within five kilometres of where the alleged victims were at the time of the incident. Nonetheless, a US firm began a class action on behalf of 50 Ecuadoreans.’

The Colombian government initially used a team of law professors – rather than practising lawyers – to contest the claim. ‘For the last 25 years, states that use a law firm have always won against states that do not use a professional team,’ Volterra says. ‘The same held true for Colombia, which was getting nowhere against a US law firm [until] it hired Volterra Fietta.’

The firm proved that, given the weather conditions, the spray could not have spread to where the victims reported suffering its effects. ‘A hurricane force five might have done the trick,’ Volterra says, ‘but that would have wrecked trains, blown over trees and sent humans and animals flying. No such catastrophic damage was recorded.’

The firm further demonstrated that you could bathe in the herbicide without coming to harm and could even drink it, although the latter might cause nausea. ‘We gathered a team of scientists who concluded that the claims were misleading and mendacious. Ecuador settled and withdrew once the evidence had been challenged. There was no massing of opposing troops on the border. Conflict averted.’

Volterra next describes a case that arose from a three-day war in 1995 between Eritrea and Yemen. Eritrea waged a war of independence against its post-second world war colonial master, Ethiopia, for 30 years before receiving recognition of statehood in 1993. In the meantime, Yemen, another neighbouring state, had begun patrolling and granting oil concessions around Red Sea islands that both it and Eritrea claimed as sovereign territory. Eritrea, having lost patience, invaded one of the disputed islands, Greater Hanish, and quickly overcame Yemeni military resistance.

Reason prevailed, however, and in 1998 both states agreed peacefully to settle their dispute before the Permanent Court of Arbitration (PCA) in The Hague. Eritrea was, according to Volterra, ‘outgunned’ by Yemen’s lawyers until it decided to instruct magic circle firm Freshfields Bruckhaus Deringer, where Volterra was an associate (1996-2001). ‘We won the arbitration,’ he says, ‘in part by producing historical records from the days when Eritrea was an Italian colony. These provided proof that Eritrea had fish factories and other established signs of settlement on certain of the disputed islands.’

The PCA, in what has been described as one of the most significant international arbitrations of the late-20th century, found that Eritrea had sovereignty over the islands closest to its mainland, while Yemen was sovereign over the remainder. In the process, the PCA solved the problem, which had been awaiting resolution since the end of the first world war, of the disputed ownership of the southern islands of the Red Sea.

Volterra says it was a ‘salutary lesson’ for Eritrea to recognise the advantages of engaging a heavy-hitting law firm, such as Freshfields: ‘If you want to play with the big boys then you must have the big boys’ toys. If you want to be a viable state, you can’t rely on the good nature of your neighbours.’

Volterra cites Crimea as a further example of where embracing PIL has helped avoid armed conflict. When in 1792 the Russians ‘kicked out’ the Turks from what is now Ukraine, he says, the area and much of southern Ukraine became the subject of competing claims for more than another half a century culminating in the outbreak of the Crimean War in 1853. There was no talk of sanctions or treaties. Instead, we had the protracted Crimean War involving forces from Russia, Turkey, UK and France.

‘But now,’ Volterra says, ‘countries have moved to impose economic sanctions on Russia following its incursions into Crimea. There has been no war between states, although Russia is widely suspected of giving arms to the rebels and there have been casualties. But the UK and France have not sent gunships and neither has the US. The talk has been of treaties, international obligations and, of course, compliance with PIL. The world is a safer place.’

The interview moves on to a high-profile dispute, resolved in October, over whether Malaysia owed its neighbour, Singapore, £735m in ‘development charges’. The ‘charges’, which were in effect a tax, arose – Singapore claimed – from the increase in value of certain plots of land after the two countries agreed a land-swap deal in 1990. Singapore broke away from Malaysia some 50 years ago and tensions, including border disputes, have endured ever since.

Volterra acted as lead counsel for Malaysia before a three-person tribunal, appointed by both countries, which included former UK Supreme Court president Lord Phillips of Worth Matravers. The tribunal found that the ‘development charges’ were intended to ensure that Singapore benefited from an increase in land value after development permission was granted and were not designed to raise revenue. Both countries accepted, as final and binding, that Malaysia was cleared of Singapore’s claims for the payment of ‘development charges’.

‘This was great result for both countries,’ Volterra says. ‘They have had a challenging relationship since Singapore broke away, but were able to determine a very important issue through rule of law and treaty. This is the first time that these countries have agreed to a binding third-party dispute resolution based on PIL to interpret a bilateral treaty and its application. Such statesmanlike and positive conduct by both countries can only be an example to parties in dispute everywhere.’

Finally, the Gazette steers the interview towards a case closer to home: Eurotunnel’s claim against the UK and French governments. Volterra was a member of the international firm Herbert Smith (now Herbert Smith Freehills) team that acted for Eurotunnel.

The team successfully argued that the two governments, by not adequately protecting approaches to the tunnel and the tunnel itself from incursions by illegal migrants trying to get to the UK, had caused Eurotunnel to suffer delays, suspension of services, security expenses and loss of revenue between 2000 and 2002.

‘Trains have to slow down for 10 miles before arriving at the tunnel,’ Volterra says. ‘That gives immigrants a chance to jump on. Or they would stop a shuttle and get on that. It is nearly impossible to make so porous a perimeter secure, but the two governments should still have done more.’

Eurotunnel started arbitration proceedings in December 2003 and in January 2007 was found entitled to damages against the two governments. The sum to be awarded has yet to be determined, although Eurotunnel estimates that it could be owed around £50m. Since its construction was financed entirely by private investment, the UK’s share of the damages will be the first public funds paid to the tunnel.

Volterra’s chosen practice area is set to remain more interesting than most. ‘I am a lucky person,’ he reflects.