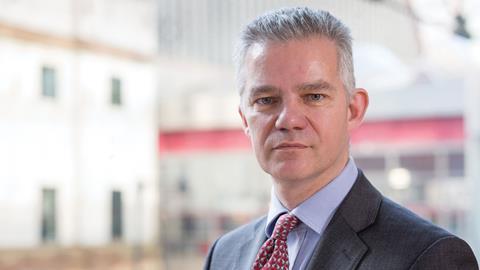 Financial watchdog the FCA’s general counsel eschewed a magic circle career for government service – and has never regretted it. Paul Rogerson met him.

Few high-flying solicitors get to work for organisations significant enough to command the scrutiny of the Archbishop of Canterbury. Sean Martin, general counsel at the Financial Conduct Authority, is an exception.

Justin Welby, a former oil executive who sits on the board of New City Agenda, put his name to an October report from the thinktank calling for the City watchdog to tighten its rein on the sector. Rules imposed after the 2008 crash are being ‘progressively watered down’, it warned, and without an improvement in regulatory culture the UK will be ‘sleepwalking into the next financial crisis’.

The same report pointedly alleged that the former acting FCA chief executive Tracey McDermott – another high-flying solicitor – had been forced out in what was widely viewed as a Treasury sacking, after the watchdog abandoned a wide-ranging review of banking culture last year.

As a de facto career mandarin, Martin is comfortable with working in such a febrile and politicised environment. In fact, he thrives on it: ‘I have an interest in politics with a small “p”,’ he says, ‘so to do something which involved government was attractive.’

It was not always thus. Armed with a degree in jurisprudence from Trinity College, Oxford, Martin glided into the limousine-lane of private practice with a traineeship at Mayfair outfit Boodle Hatfield. He then switched to magic circle firm Freshfields Bruckhaus Deringer.

But that life (or perhaps ‘This Life’) wasn’t for him: ‘I enjoyed my time at Freshfields doing corporate work. But I began asking whether this was what I wanted for the rest of my career. I wanted to do work that was in the public interest, rather than commercially driven.’

Has he ever regretted it?

‘Absolutely not,’ he insists. ‘I’ve enjoyed my time in government and the variety of work it has brought. I wanted to do something very different from what I’d been doing in the City and I’ve certainly done that.

‘When I started in the Government Legal Service, I was put into a broad litigation team doing a mix of commercial litigation and arbitration, ranging from contract disputes relating to IT failures, through to claims against the Ministry of Defence for radioactive contamination of land.’

Eschewing a coveted berth in commercial practice for an in-house career – especially in the public sector – would have been seen by some as an eccentric decision back in the early 1990s. But the switch was not just about Martin’s public service ethos and a quest for variety; it was also about responsibility.

‘The level of autonomy [I was given] increased very quickly,’ he recalls. ‘Even though I didn’t have a litigation background, I was expected to take the lead pretty much from day one. That was great.

‘A firm the size of Freshfields required large corporate teams. There was always a danger of being a small cog in a big machine.’

Following a ‘fascinating’ career break at the Department of Justice in Hong Kong at the time of the handover to China, Martin joined FCA predecessor the Financial Services Authority in 2004. It was an altogether different era. Markets reigned supreme, ‘light-touch regulation’ was not a proscribed term and history was at an end amid the lingering euphoria following the fall of the Berlin Wall.

This all proved a tad optimistic, of course, and we continue to suffer for our illusions – as the head of the Church of England acknowledges.

Bailey acquainted his gilded audience with some uncomfortable facts that form the backdrop to the watchdog’s work in the long shadow cast by the 2008 crash.

Bailey is aware that the FCA has struggled to shake off the brand contagion passed on by the unlamented ‘Financially Supine Authority’ (as Private Eye dubbed its predecessor) in the wake of new scandals such as PPI mis-selling and interest rate hedging. So last month he launched a new ‘mission statement’ for the authority, pledging to intervene more to help customers vulnerable to mis-selling and be more proactive in taking action over market failures.

‘The organisation has certainly changed,’ since the FSA became the FCA, says Martin. ‘The FCA was given a clearer focus and new powers. Much of what I’ve been doing is understanding how that new focus should operate. For example, the FCA was given a [brief] to promote competition on behalf of consumers. We now have concurrent powers alongside the CMA [Competition and Markets Authority]. Some of the interesting work we’ve done has been developing our approach – what falls to us and what falls to them.’

He adds: ‘We also took on the regulation of consumer credit [from the Office of Fair Trading] the year after the FCA was created [in 2013]. That meant a huge increase in the number of firms we regulate, from 27,000 to 56,000.’

But why does the FCA still feel compelled to explain itself with a new mission statement?

Martin says: ‘We have defined statutory objectives and a detailed business plan that sets out how we’re going to pursue them. But Andrew came here with a clear sense that we needed something “in the middle” which tells a story about what we do and why. The aim is not to suggest we’re going to change things radically – but to better explain the scope of our work and how we prioritise it.’

Was Martin involved in drawing up the new document? ‘Yes,’ he says. ‘It has been an inclusive exercise within the organisation to ensure a range of views are represented in terms of how we do things.’

Back to the day job – how big is Martin’s team? ‘It’s about 80-strong, including barristers, and from a diverse background. We take people from government, but also the City, the bar, sometimes from government. It’s a broad church.’

So how does a working day in the life of the FCA’s GC pan out?

‘Much of what I do is about supporting the FCA’s executive committees and board,’ he says, ‘certainly in terms of direct legal advice and input. There is also a leadership function in terms of the [legal] team. I’m responsible for managing the budget and headcount, recruitment and promotion – the fairly standard stuff that comes with a management role.’

GCs continue to struggle with the perception that they are incidental to strategy – the naysayers who countermand executive fiat. Does Martin have a role in setting strategy?

‘Very much so,’ he says. ‘I am a non-voting member of the FCA executive committee, which means I attend all external meetings. I’ll be at the FCA board away day so will be involved in all the decisions relating to strategic prioritisation and budget-setting.’

And what work does his team do?

‘In some ways, it’s easier to start with what we don’t do,’ Martin says. ‘We don’t provide legal advice in relation to enforcement decisions in specific cases. That falls to the enforcement division. We don’t do commercial procurement or employment advice. But pretty much everything else is included. It might be providing input into legislative developments, either at domestic or EU level, for example.’

One of his more sensitive responsibilities is to advise on the need for the controversial process known as ‘Maxwellisation’ – a process where people criticised in public reports are allowed to make representations before the reports are published.

Litigation-wise, a recent case was was a landmark judicial review bid by nursing home operator Holmcroft Properties against KPMG. The accountancy giant reviewed a compensation scheme set up by Barclays to compensate victims of interest rate swaps mis-selling.

Holmcroft was awarded £500,000 under the scheme, but was not paid for other consequential losses that came about after the costs of meeting its swaps obligations rocketed.

Lawyers for Holmcroft argued that because banks set up compensation schemes at the behest of the FCA, KPMG had a public law duty ‘woven into the fabric of its task’. But the watchdog, with Barclays and KPMG, successfully argued that the relationship between the bank and accountant was a matter of contract, with no wider public law duty to act fairly.

The case could have opened the floodgates for other businesses unhappy with their compensation from banks. Holmcroft renewed its application for permission to appeal to the Court of Appeal.

The FCA handles all but the most complex legal challenges internally, but brought in Baker & McKenzie for Holmcroft. ‘We don’t have a panel as such, though there is the Crown Commercial Services Panel which we look at to inform our choices,’ explains Martin. ‘We’re not constrained only to use the firms on that panel though – we will also look at others if they offer the best value for money, or relevant expertise.’

I ask if he might need a few more advisers on board as Brexit looms. Since 1999, the EU has successfully launched a number of regulatory initiatives aimed at ensuring integration of financial services markets. Rating agency Moody’s is among those that insist Britain’s biggest banks and financial services institutions could withstand the loss of their much-cherished passporting rights. But the legal ramifications of June’s vote remain potentially momentous and are still highly contingent on the circumstances of withdrawal.

Martin is not daunted, while stressing that the implications for resourcing his department are not yet clear.

‘As it stands, we are providing technical input and comment to government to inform its deliberations,’ he says. ‘Clearly, there will be ramifications for how we regulate in light of whatever model is adopted. It promises to be an exciting and rewarding aspect of my job in years to come.’