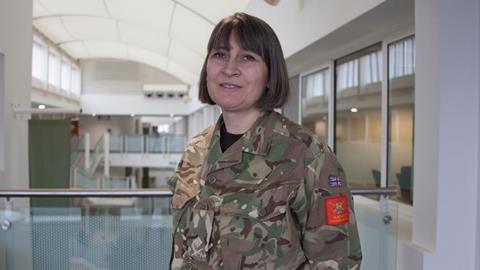 The British army’s first woman major general is former high street solicitor Susan Ridge. Her elevation was not without sartorial complications. The shoulder boards – we civilians call them epaulettes – pinned to her uniform when she became a two-star general were designed for bulkier frames. In her case, she says, the result is an overlap on both sides which makes her ‘look like Kenny Everett’ in his bombastic ‘General Cheeseburger’ persona. The army is to remodel them.

Otherwise Ridge, who as the new Director General of Army Legal Services (ALS) became major general Susan Ridge in September 2015, wears the accoutrements of power easily. Other ranks spring to attention as we pass through Andover, Hampshire-based Land Forces HQ.

From starting her career as a trainee at a North Wales general practice, Ridge now commands a team of more than 130 qualified solicitor and barrister army officers deployed in the UK or overseas conflict zones.

Is being a military lawyer broadly similar to being a civilian lawyer? ‘There are oddities,’ Ridge replies. ‘For instance, military personnel, including ALS lawyers, are not on employment contracts. Technically, we are all employed at the will of the Queen. And all of us are subject to military law, are trained to be combatants and must be ready to deploy to wherever the army sends us.’

Was Ridge born to the khaki? ‘I’m not by nature the person you would immediately think of as being in the army,’ she replies. ‘I’m a farmer’s daughter and find no special pleasure walking in the countryside in the mud and rain! And I was always the slowest at completing obstacle courses at Sandhurst.’

Choosing an army career was ‘a big decision’, she reflects. ‘I’d been lucky to find myself training in a delightful firm in north Wales [Swayne Johnson Wright]. They were gentlemanly and looked after their articled clerks. I stayed on after qualifying and, some years later, was invited to join the partnership. But I decided to do something different before committing myself and began a four-year short service commission with the ALS.’

That was back in the early 1990s. The switch has lived up to expectations, she says: ‘I’ve done things that I’d never have experienced in private practice, like flying in a helicopter. I conducted a summary of evidence in a tent in Sarajevo and another in a dockyard in Croatia.’

She adds: ‘I also had the opportunity to prosecute very serious matters in a service setting, such as a case of historical sex abuse.

‘The army has jurisdiction in Germany, where British soldiers have been posted and are subject to England and Wales law. A soldier was accused of abusing his stepdaughter and I was part of the prosecution. Again, it was the type of case that I would never have encountered in private practice.’

In 1993, Ridge did a ‘legal aid tour’ of all units in Bosnia. ‘When soldiers are posted overseas on operations, they take their legal problems with them and need individual help with issues such as debt, divorce and the rest,’ she explains. ‘It’s about the only time the ALS helps individual soldiers. Most of the time we are there to advise the chain of command.’

She adds: ‘The role of the ALS is not usually to advise individual officers, but to advise within the framework of the chain of command to ensure it acts lawfully with due regard to the legal rights of soldiers, civilians and the enemy.’

In military terms, the chain of command is not dissimilar to the way a civilian company is structured. At the top are generals or chief executives who decide strategy and pass the orders down to brigadiers or directors. These in turn pass orders down to colonels, majors, captains, lieutenants, sergeants and corporals or, in a civilian context, to department heads, managers and team leaders. The orders move downwards and accountability moves upwards.

So what does Ridge advise the chain of command upon? ‘We provide legal advice wherever and whenever it is required,’ she replies. ‘We are expected to deploy and go on exercises or operations. We advise across the piece on international, civil and military law, for example, as well as giving legal advice on operational law, the law of armed combat and rules of engagement.’

She adds: ‘You could find yourself advising on the finer points of international law in the middle of a war zone. We also often find ourselves advising on whether to bring court martial charges against an individual and prosecuting at courts martial, too.’

Ridge goes on to stress that the ALS gives lawyers huge opportunities to develop their legal skills and is a ‘great organisation within which women can progress’. About 40% of ALS personnel are women (compared to 8.9% for the army as a whole). Another high-flier, Brigadier Juliet Bartlett, is director of operational law in the ALS – one rank immediately below Ridge.

As the army’s own website and Ridge both acknowledge, however, soldiery is hardly a 9-5 occupation: for example, one can be required to deploy overseas with minimal warning. Sacrifices are inevitable.

She adds: ‘My husband, who is also a serving officer, has always [shared] responsibility for managing family and home while also juggling the challenges of his own career.’

As Ridge noted on her appointment, ‘there have been occasions when he has been posted away, we have done long periods of weekend commuting and he has done tours in the Balkans and Afghanistan. But largely it has worked so well because he has been onside.’

She continues: ‘Looking at the wider picture, the army pays close attention to societal change. It is presently trialling two flexible working schemes. One scheme means that you are less deployable for a time and so can meet the needs of a very young family, for example. The other scheme allows for compressed hours to fit in with, for instance, the school run or to plug the gaps in childcare arrangements.’

Nevertheless, Ridge adds, ‘it must be remembered that an army career is not just another job – it requires a different, heightened form of commitment. Anyone applying to us thinking otherwise simply hasn’t understood what’s expected of them. If the army says we are deploying and taking a legal adviser with us, then that legal adviser goes – no question or special pleading.

‘To consider a hypothetical case, if your child has chicken pox and you don’t turn up to work because you want to care for them, you could be guilty of a failure to do a duty or of being absent without leave.’

The army has moved with the times in other ways since Ridge joined up 23 years ago. Another notable change she highlights is a 1997 case ‘which changed the way the army carries out courts martial and led to the creation of an independent and impartial Military Court Service’.

That case concerned Alexander Findlay, a member of the Scots Guards. In 1982, Findlay fought in the Falklands campaign and, during the battle of Tumbledown, witnessed the death and mutilation of several friends, He was himself injured by a mortar-shell blast.

Findlay subsequently suffered from post-traumatic stress disorder, though this was not diagnosed at the time. In 1990, by then promoted to lance-sergeant, he was sent with his regiment to Northern Ireland. On 29 July of that year, after a drinking session, he held members of his own unit at gunpoint and threatened to kill himself and colleagues. He fired two shots, which were not aimed at anyone but hit a television set. He subsequently surrendered the pistol.

Findlay was arrested and the decision taken to proceed against him at a court martial. He was found guilty, sentenced to two years in prison, reduced to the rank of guardsman and dismissed from the army (which caused him to suffer a reduction in his pension entitlement). No reasons were given for the sentence.

Findlay appealed the sentence before the European Court of Human Rights, which found that his rights under article 6 of the European Convention on Human Rights had been breached. This was because he had been denied a fair hearing before the court martial, which the European court found was not an independent and impartial tribunal – not least because the trial was convened by one of Findlay’s own senior officers who, in turn, was supported by other officers of lower rank from the same unit.

The Armed Forces Act 1996, which replaced the 1955 Army Act, now ensures impartiality by allowing a new prosecuting authority to have absolute discretion. This applies similar criteria to those used in civilian cases by the Crown Prosecution Service in deciding whether or not to prosecute; what type of court martial would be appropriate; and what charges should be brought.

In making military history as the army’s first woman major general (2-Star), the Gazette asks Ridge whether she would consider herself a role model. She demurs: ‘There are far better role models out there than me, soldiers and officers who have achieved more. I’m in a niche area of the army, while others in the mainstream are paving the way.’

But she would recommend a career in the ALS. ‘It’s a fulfilling and fascinating role,’ she says. ‘It’s rather like working in-house, where you can enjoy working with the client – the army – but also enjoy being the client and owning the advice you give.’