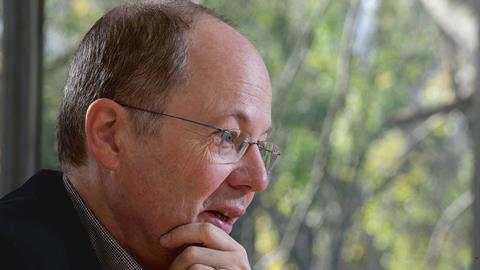 The founder of ClientEarth talks to the Gazette about how Zen Buddhism informs his work and being raided by the Polish police.

Solicitor James Thornton has only one client. ‘It’s that great big lump of rock that we’re standing on,’ he begins. The entire planet, then, with all its natural resources of land, air and water.

Despite seeming to lay claim to our corner of the universe, Thornton is not intent on global domination. He is the chief executive and founder of ClientEarth, a not-for-profit environmental law firm that he set up in London five years ago. He was previously a corporate lawyer on Wall Street before doing a stint at the US environmental public law organisation, the Natural Resources Defense Council (NRDC).

A UK version of the NRDC, ClientEarth’s mission is to use law and science to persuade governments to comply with regulations and directives governing key environmental challenges facing our planet, such as pollution and the destruction of natural habitats.

In six years the firm has grown to a headcount of 60 staff, including 40 lawyers, and now also has offices in Brussels and Warsaw. It is active in West Africa and across Europe. Unusually for a law firm, it numbers a leading rock band and a celebrity chef among its sponsors.

It is an achievement which Thornton says is based on his, and his colleagues’, values. ‘ClientEarth connects my deepest beliefs with my everyday work,’ he says. ‘I have been a Zen Buddhist for more than 25 years and we believe in saving all sentient beings, which means protecting biosystems and biodiversity. My moral compass is perfectly aligned with the area in which I work.’

But with Downing Street allegedly planning to scrap the ‘green crap’ around environmental taxes and subsidies, what more can he hope to achieve? ‘We are making progress on all fronts,’ Thornton says. ‘We have won cases in the UK Supreme Court and in Europe, with some of the decisions extending to Africa’s timber regulations and forestry laws.

‘One of our most potent legislative tools is the “magna carta” for the environment, the Aarhus Convention. Aarhus ensures access to justice by saying that it must not be prohibitively expensive for a consumer to bring an environmental case to court – as has traditionally been the case in the UK, where Her Majesty’s courts are open to everyone, just like the Ritz.’ He adds: ‘Aarhus also obliges governments to allow members of the public to have access to information and to participate in decision-making where environmental issues are involved. We have successfully challenged governments, here and overseas, for failing to comply with the convention.’

The firm’s work is only in part about the enforcement of existing laws, Thornton explains: ‘Our weapons have included not only Aarhus, but also Europe’s Strategic Environmental Assessment Directive and its Air Quality Directive on limiting pollution. But we also spend perhaps 75% of our time writing good laws which can be effectively implemented and enforced, here or overseas.’

Poor air quality has consequences close to home, he adds: ‘It is estimated that 29,000 people a year die prematurely in the UK because of the polluted air we breathe. London and other major cities in this country are in daily violation of the European directive setting limits on how much nitrogen dioxide is in the air.’

Nitrogen dioxide, largely produced by exhaust fumes from diesel engines, contributes to the formation of microscopic airborne particles called particulates. These are carcinogenic and increase the likelihood of heart attacks. At elevated concentrations, they can also irritate the eyes, nose, throat and lungs, and lead to coughing, shortness of breath, tiredness and nausea. They can arrest lung development in children to just 60% of their natural full capacity, a condition that often only manifests itself when an individual begins to experience respiratory problems in middle age.

The UK, under the EU’s Air Quality Directive, was given until 2010 to reduce the concentration of nitrogen dioxide and particulates in the air to an acceptable level. One UK judge responded to the directive, it is alleged, with ‘this looks like European law and I am a British judge’. Such an attitude, Thornton suggests, might help explain how the UK not only failed to reduce the pollution level by 2010, but also felt it reasonable to ask for a 15-year extension to 2025.

Thornton was ready with a response that, of course, used the law: ‘We became the first citizen organisation to take an environmental case against the UK government to the Supreme Court – and we won.

‘The government took the view that non-compliance [with the Air Quality Directive] was all part of the litigation game, but the Supreme Court said that its role was to apply the law and that the government was clearly violating the law. It held the case open for immediate enforcement once Europe’s top court, the Court of Justice of the European Union (CJEU) in Luxembourg, had given its input. Unfortunately,’ he adds, ‘the CJEU refused our request to apply the accelerated procedure to our case and so it will probably be 2014 before we get a judgment.’

The Gazette met Thornton in London in November, while several of ClientEarth’s staff were at the UN climate change conference in Poland. This was a fractious meeting of environmental ministers and heads of state from around the world, with delegates at one stage arguing through the night over one word in a single clause of the draft agreement.

Host country Poland was accused of putting its own national interests ahead of those of the delegate countries and actually sacked its environment minister while the talks were in progress.

Thornton notes that Poland is indeed a challenging country in which to have an office. ‘Our efforts, a combination of litigation, lobbying and targeted campaigns, have seen 10 new coal-fired power stations put on hold and another four killed off,’ he claims. ‘But is has made us unpopular with the Polish government. We have been investigated by the secret services and raided by the police.’

ClientEarth was also instrumental in the decision by regional authorities, announced a few days after the conference’s conclusion, to ban the use of fossil fuels for domestic heating in Krakow, Poland’s second city. Krakow has one of the highest levels of air pollution in the EU and the move should help improve the health of residents. ClientEarth was involved in consultations on the ban and in helping develop the legal framework to underpin it.

All of which gives ClientEarth common cause with a rock band and a celebrity chef. ‘The rock band Coldplay became one of our patrons about three years ago. Members of the group have long been advocates for the environment and we are pleased that they will continue to speak out alongside us,’ Thornton notes. ‘The video announcing their support for us received 75,000 hits when it was posted on the band’s website. It is absolutely fantastic to have one of the world’s most successful groups supporting our work.’ The band’s creative director, Phil Harvey, is also a ClientEarth trustee, along with their album producer Brian Eno and ecologist Zac Goldsmith MP.

ClientEarth’s collaboration with TV chef Hugh Fearnley-Whittingstall was sparked by their shared interest in marine biodiversity and protecting dwindling fish stocks. The firm lobbied DEFRA (Department for Environment, Food and Rural Affairs) to safeguard areas that had been designated as requiring protection. ‘We focused on existing laws and the need to implement them,’ Thornton says. ‘We also worked with Hugh on the EU Common Fisheries Policy, a terrible law that makes member states manage fisheries terribly.’

Supporting Fearnley-Whittingstall’s Fish Fight campaign, ClientEarth and the chef jointly released a study in January 2011 of the way in which UK supermarkets source and label fish products. One major supermarket promptly announced that within a year all its canned tuna would be caught by the environmentally preferred pole-and-line method.

Further afield, ClientEarth works with lawyers and government bodies in the West African states of Ghana, Gabon and the Republic of Congo (or Congo-Brazzaville).

The work aims to stop a valuable natural asset from being dissipated as the rainforest is unsustainably cleared and also to protect the people who live, hunt and grow crops in the forest.

After just six years, ClientEarth is active in Europe and Africa. The firm connects with the younger generation through its association with Coldplay and has tapped into consumer concerns about sustainable foodstuffs through its links with Fearnley-Whittingstall.

It may not  be global domination, but ClientEarth has a message that is getting through.