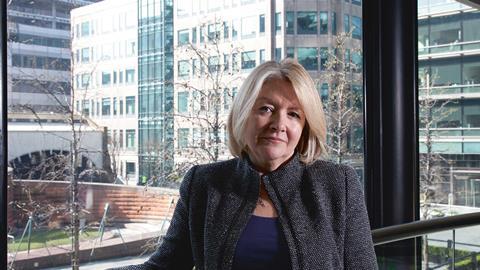 HSF’s head of global arbitration chats about a memorable international career and being made a QC.

Solicitor Paula Hodges QC confesses to having been, albeit briefly, a ‘pseudo-expert’ in such arcane areas as the seismic exploration of the seabed, the import of softwood lumber and the complexities of soft drinks franchises in Arab countries. It is all in a day’s work for someone who has been an international arbitration lawyer for global firm Herbert Smith Freehills (HSF) for her entire career.

You work on a case, become a ‘pseudo-expert’ so that you can effectively cross-examine expert witnesses, and then move on to, say, cases involving computerised fingerprint recognition or management of the World Trade Center in Dubai, she explains.

It sounds a fascinating and varied career. But first the Gazette asks Hodges about her freshly minted QC status – she was one of only five solicitors among the 100 QCs appointed in February. ‘It was my first attempt at becoming a QC,’ she replies. ‘You apply to a selection panel and must have higher rights of audience. The interview was gruelling, but it worked out well in the end.’

Hodges has omitted to mention the numerous plaudits she has earned over the years that must have influenced the selection panel. She was shortlisted as advocate of the year in the Global Arbitration Review’s 2011 awards. Eight years ago, Chambers Europe quoted sources saying: ‘The incisive Paula Hodges never misses anything. She’s tremendously effective.’

Only last year she was described as a ‘consummate lawyer who is great to work with and integrates well into the in-house team’ and is also ‘a very, very impressive head of arbitration with a prodigious work output’ (Chambers UK). And the Gazette’s favourite: ‘She is a charming lawyer who, when needed, has no qualms about destroying her opponents to show them that they have no case and should run away’ (Chambers UK 2010).

She sounds eminently qualified to take silk. What is the advantage of having the QC tag? ‘I have clients all over the world and, in some jurisdictions, it is seen as essential to have a QC on the team,’ she says. ‘It is regarded as a badge of quality that allows the firm to do the entire job without bringing in external counsel. It is also a good way to develop the business. It endorses the quality of the team’s advocacy and will help attract bright young lawyers to the firm. We now have five solicitor QCs at HSF.’

The Gazette invites Hodges to take us back to the beginning of her career. ‘I originally wanted to be a barrister,’ she says, ‘but changed my mind at university. You have more client contact as a solicitor and that appealed. I spent two weeks at HSF one vacation, signed on the dotted line and have never looked back.’

She was recruited by Charles Plant, an HSF litigation and arbitration partner from 1976 to 2005 and now chair of the Solicitors Regulation Authority board. Plant asked Hodges to work with him upon qualification. ‘The result was that from the word go I was doing a great variety of High Court litigation and international arbitration,’ she says.

The Gazette asks what international arbitration can achieve that litigation cannot. The essential distinction is that litigation is carried out in national courts, with the complication of local practices that may be unique to that jurisdiction and also the difficulty of enforcing judgments in other countries. In contrast, international arbitration is entered into by parties who have agreed – because they are from one of the 140 countries that have signed the New York convention on arbitral awards – that decisions are binding and enforceable, irrespective of where the arbitration takes place.

A glance at the countries in which Hodges has acted for parties underlines the need for a neutral forum to resolve disputes. She has had clients in such ‘exotic locations’ as Equatorial Guinea, Nigeria, Egypt, Kenya, Mozambique and Korea. Her cases have concerned disputes centred on the Caspian Sea, Chad, Dubai, Iran, Yemen, Mauritania and Indonesia. In one instance, she acted for Telekom Malaysia in an expropriation claim against the government of Ghana. In another instance, she acted for a Canadian energy company in an ICC arbitration regarding the purchase of oil and gas interests in Kazakhstan.

Which cases were her most memorable? She talks about one that lasted around seven years during which she advised BP Amoco and others in a dispute with the now notorious US multinational Enron. Enron had contracted to buy natural gas from the North Sea’s Judy field, but in 1995 declined to do so. Its stated reason was that the Central Area Transmission System (CATS) pipeline had not been built to the required standard and, because of this, was incapable of meeting the terms of the contract.

BP Amoco and others, who owned the CATS pipeline, dismissed this explanation, seeing it as a move by Enron to escape from contracts requiring it to buy gas at the price agreed before the North Sea gas industry was liberalised. Liberalisation reduced the cost of gas, but Enron, contractually, would still have been obliged to buy gas at the agreed price – which was now higher than the cost of gas on the spot market.

‘The case went all the way to the House of Lords,’ says Hodges, ‘which ordered a damages award of more than £100m. We got the money just one month before Enron went under [Enron filed for bankruptcy on 2 December 2001].

‘It was a pivotal case for me. I was acting for seven oil and gas companies and having weekly operational meetings with them. It allowed me to build relationships with some of the industry’s biggest players. I still do work for them, as well as some of the individuals who have moved on to other companies.’

How about a case not involving oil or gas? Hodges says: ‘I particularly enjoyed a case three or four years ago which went the full distance – it is always nice to get an award because you won in court rather than because the case was settled.’

The case involved a database owned by her ‘global travel services provider’ client, which had entered into a joint venture arrangement with various Middle East airlines. The deal was that the client would pay a commission to the airlines for displaying their flights on the database. Travel agents could then use the database to book itineraries, through the travel services client, for their customers. The dispute arose over the disparity between the number of flights booked and taken through the database and the number booked and then cancelled.

Hodges explains: ‘It was a cultural issue. The uber-rich, of whom there are plenty in the Middle East, are in the habit of buying seats on a number of different flights, and then cancelling most of them when it becomes apparent which particular flight is the most convenient. It was an interesting and challenging case because it was a new client and a new technical area.’

Hodges clearly has had no shortage of interesting cases during her career. She goes on to talk about advising IBM UK in a highly publicised, multi-million-pound dispute regarding the provision, in conjunction with a French subcontractor, of an automatic fingerprint recognition system to a network of 37 UK police forces.

‘There were problems with the software,’ she recalls, ‘but the case between IBM and the police concluded with a highly satisfactory settlement after a 20-day trial in the Technology and Construction Court in 1998.’

She adds that ‘on a personal note’ it was a ‘great case’ because she got to know IBM in not only the UK, but also the US and France. This led to a ‘spate of work’, she says, ‘but more litigation than arbitration’.

Another fascinating case involved an ICC arbitration between a US multinational soft drinks company and its franchise in Algeria. ‘My household-name client allows the recipe for the drink to be adjusted to local tastes,’ says Hodges. ‘Essentially, the drink contains more sugar in Arab countries than it does elsewhere.

‘However, the client has always been very rigorous about brand presentation and felt that the local bottler had not complied with the branding guidelines. There was also a dispute over distribution. My client terminated the contract and the franchisee sued for damages. The case settled.’

Hodges’ enthusiasm for her work is apparent. She remembers past cases with pleasure and her successes are understated: it is ‘nice’ to win in court, the ‘gruelling’ QC interview ‘worked out well in the end’ and she was but a ‘pseudo-expert’ on some of the technicalities of complex arbitrations. However, there is nothing ‘pseudo’ about her expertise as an international arbitrator.

Her genuine skill and commitment shine out.