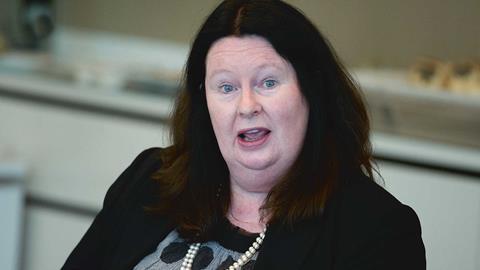 Few women solicitors have smashed the ‘glass ceiling’ into as many shards as CMS Cameron McKenna’s Penelope Warne.

When a woman is successful, ‘there is a huge responsibility to ensure you can really help the culture’, says Penelope Warne.

‘Responsibility’ is a word the softly spoken senior partner and head of energy at international firm CMS Cameron McKenna uses several times during our interview.

Warne is the only woman leading a top-20 firm, though from May she will have company in Sonya Leydecker, incoming joint chief executive of City firm Herbert Smith Freehills.

Warne is also the first woman to hold the title of senior partner at the firm since being elected to replace Dick Tyler last December, a role that confers board chair status too.

Despite the under-representation of women in high-level positions, she is positive change is afoot. ‘I think perhaps more women are beginning to break through in these roles. It is beginning to happen but it is still unusual,’ she avers.

By some measures CMS is leading the charge when it comes to gender diversity among firms. Fiona Woolf, current lord mayor of the City of London, is a partner of the firm. Like Warne, Woolf has broken ground in improving female representation at the highest levels – becoming the firm’s first woman partner in 1981 and the second woman president of the Law Society in 2006.

‘The two of us have an opportunity to really make a difference. And people have been quite excited by that,’ Warne says.

These positions have the potential to create a ‘virtuous circle’ of diversity, as they send a positive message to women that the culture of the firm rewards success. ‘It brings an opportunity for me to “step up to the plate” or not – to help all lawyers, but also female lawyers,’ she says.

For a profession that has rough gender parity at associate level, the drop-off rate for women making partner remains stark. Around 23% of women go on to become partners – a figure that drops to below 20% for City firms, according to research by the Chambers Student Guide. In this respect CMS fares better than most, with 25% of  partners being female.

Warne feels a particularly strong obligation to help younger female lawyers. The reason for the diversity lag in City firms, she says, is not lack of talent, but a failure of some firms to put policy into practice.

CMS makes a conscious effort to nurture talented women and Warne is keen to see the number of female partners at the firm increase further.

‘I want to ensure we have a really great culture here that is both very dynamic and successful. No one wants to be in a firm if it is not successful, profitable and innovative. But that culture needs to be very supportive, so people feel they are really valued and comfortable.’

Communication is vital, she adds. ‘Sometimes it can be just offering those extra few words of encouragement – in one firm they get said and in another they don’t. That kind of thing makes a difference.

‘If that doesn’t happen around meeting room tables, then the culture gets left behind.’

Warne herself has enjoyed a stellar career. She began as a banking lawyer at magic circle firm Slaughter and May before joining CMS in 1993 as an energy specialist, setting up the firm’s office in Aberdeen.

After moving north of the border she self-trained to become dual-qualified, going on to work with high-profile energy clients such as BP. She also lectured at Dundee University.

During her time at CMS she has been instrumental in setting up offices in Edinburgh, Brazil, Mexico, Dubai and, most recently, in Oman in February.

She also played a key role in the merger with leading Scottish firm Dundas & Wilson which, when it goes live in May, will transform CMS into ‘the largest law firm in Scotland’.

At the time the merger was announced, Dundas & Wilson had 71 partners and 450 employees in Edinburgh, Aberdeen and Glasgow. This ranks the Scottish outfit among the top 50 in the UK, with a turnover of £48.7m in 2012/13.

Warne prefers the term ‘combination’ when talking about the deal she has played a key part in superintending. ‘I think you get the wrong perspective if you call it a merger, as we are four times as big as they are – and that’s just in the UK,’ she says.

CMS now has 57 offices worldwide. ‘That is a radical change from when I joined,’ notes Warne. ‘The legal market now is global because our clients are global. So it’s hard to remain as a UK firm if you are really going to serve clients well.’

Unsurprisingly for the senior partner, Warne is ‘very keen’ on further growth. ‘It’s important to us because it’s important to our clients. If you have big global clients, I think you need to mirror that with a big global law firm.

‘To serve your clients well, you do need to have both a size of law firm in terms of resources but also a geographical footprint that can be useful to them.’

She adds: ‘I’m sure we will grow. The interesting conundrum is growing to the west, with the US, and also growing east with regard to Asia. I don’t know quite how we will grow, but I’m sure it will be to both east and west.’

These are decisions that will require careful consideration given the difference in the markets and cultures of two geographically discrete areas, she says.

KNOWN FOR Senior partner, board chair and head of the energy practice group, CMS Cameron McKenna

OTHER ROLES Banking lawyer, Slaughter and May; joined CMS Cameron McKenna in 1993 to set up the firm’s Aberdeen office. Honorary Fellow and Trustee of the Centre for Energy, Petroleum and Mineral Law and Policy at Dundee University. Member of the Foundation Board at IMD business school, Lausanne

Warne cites globalisation as a key catalyst for change in the legal market over the last two decades. ‘We’ve seen a lot of consolidation – that’s partly because law is becoming more global,’ she notes. ‘Firms are realising they can’t do it all on their own. I think the legal market will change even more in the next five years in terms of growth, consolidation, technology and being more modern.’

The movement of the Big Four accountancy firms ‘a little bit closer to the legal world’ is also an ‘interesting development that one has to watch’, says Warne. The quartet are already global behemoths with the networks and brands to give the legal giants a run for their money.

On profitability, Warne observes that clients are increasingly expecting a more efficient service at lower rates, which means it is incumbent on firms to streamline their practices: ‘So the strategy is to be practical, modern, efficient and technology-driven.’

Running an efficient practice is very important to Warne. ‘We try to be very good at being business lawyers,’ she says. To that end, the firm has a strong emphasis on training. ‘We are keen on training in the context of business law and getting more modern,’ she adds.

CMS has a partnership with IMD business school in Switzerland, which runs executive MBAs. The firm sends lawyers from across the globe to the academy every year and all its new partners take training courses there. Warne believes this is unique among law firms and it is something she takes an active involvement in, sitting on the academy’s foundation board.

‘We hope we don’t only turn out really high-quality trained lawyers, but also lawyers who can arrive in the business world,’ she says.

Although the global expansion of CMS is by no means unusual for a firm of its size, Warne believes the firm has a number of ‘unique selling points’ for clients. One is its sector expertise, principally in oil and gas, but also power and renewables. Both these areas are ‘phenomenal sectors’ for the firm, she says.

But from a holistic perspective, Warne says CMS is also distinctively different. ‘We are now the largest law firm in Scotland; we have centuries of tradition as a City law firm; we are the most in-depth, largest European law firm; we are top-20 global – and we have a female senior partner,’ she says. ‘You don’t have any firms that do all those things and have the very significant sector expertise we have.’

‘The recession has been challenging for everyone,’ Warne observes. ‘These things are relative, but we are not complacent – if there is a fall we do something about it.

‘But [we are now] in a market that is recovering and growth is possible again. And that is really good news for clients and lawyers.’

Given the sheer scope and ambition of the firm, Warne is cognisant that her new role will not be without one major challenge: time.

‘Everyone is going to want a little bit of my time. I am going to have to be careful how I manage this because I want to be accessible to everyone. But I also want to have a diary which can actually deliver benefits for my firm, and obviously my clients,’ she says.

As someone with a strong track record in getting results, this seems unlikely to be a problem – something that can only be good news for the firm’s ambitions both for growth and diversity.

Kathleen Hall is a Gazette reporter