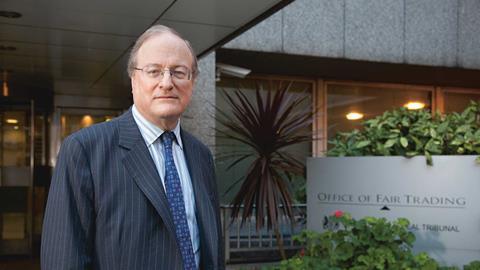 He would have been the envy of millions of star-struck teenagers when, early in his career, Office of Fair Trading (OFT) chair Philip Collins met three of the Beatles. It was not backstage during a gig. Rather, as befits a newly qualified City lawyer at what is now international firm Hogan Lovells, he was engaged in litigation and acting for Ringo, George and John.

Where was Paul? ‘I rather think he was on the other side,’ Collins replies.

The son of Sir Geoffrey Collins, Law Society president 1951/52, he qualified as a solicitor at what is now Hogan Lovells in 1973, the year the UK joined the Common Market. It was fortuitous timing, Collins says, because it prompted the firm to give him a year’s paid leave of absence to take a post-graduate degree in European competition and constitutional law at St John’s College, Oxford. ‘Upon my return, I mostly worked on UK matters at first,’ he recalls, ‘but then European work began to mushroom over the next three or four years.’

He became a partner in 1978, establishing a specialist practice area to advise clients worldwide on UK and European competition issues, as well as European law. Collins moved to the firm’s Brussels office 15 years later, where he set about developing ‘a broad practice in advisory, contentious and transactional competition work’.

He says: ‘We were not quite the first UK firm in Brussels, but it was still an exciting, pioneering time. The work was fascinating because it was a mix of law, economics and understanding how businesses work. My clients initially thought competition law was simply an extravagant way to spend time and money, but they came around to understanding that it could help them do business better. This was particularly the case in the context of a merger or of trading in such a way as not to infringe the law. Clients were left feeling that our advice added value.’

As a lawyer advising on competition law, Collins adds, ‘one becomes part of the client’s corporate memory’. He says: ‘Potential mergers can easily take up to 10 years to reach fruition. We have often been involved from the start and can help a client company’s general counsel present a consistent picture of the company, even when the main players from a decade earlier have moved on.’

Collins left Lovells in March 2005, after more than three decades, to become senior counsel at US firm Wilmer Cutler Pickering Hale & Dorr, also in Brussels. However, his tenure there was brief. On 1 October 2005 he became chair of the OFT, an organisation with 504 full-time staff, including 100 lawyers and 56 economists.

Was it wise to move from the familiar culture of private practice to a government body? The only answer can be that it was an altogether apt appointment for someone who has made a career out of competition law. As the OFT’s website says, in seeking to make ‘markets work well for consumers’, the OFT aims to ensure that ‘businesses are in open, fair and vigorous competition with each other for the consumer’s custom’. To this end, it identifies and stamps upon unfair practices, such as rogue trading, scams and price-fixing cartels.

The OFT has achieved some headline-grabbing successes during Collins’ chairmanship. In April 2011, it fined Reckitt Benckiser £10.2m for abusing its position in the market for the NHS supply of antacid heartburn medicine Gaviscon. It has reined in credit card companies’ attempts to overcharge customers and made the process of transferring cash ISAs faster and more transparent.

According to a 2009 National Audit Office report, the OFT’s competition enforcement work led to direct savings for consumers in 2007/08 worth £77m, while its market studies work saved consumers £98m over the same period.

A look at some of the OFT’s cases during the first two months of 2014 gives a snapshot of the diversity of issues its officers routinely address. The OFT has so far this year announced the results of its investigation into the pricing policies of two carpet and flooring companies; brought a man to court on criminal cartel offences committed between 2004 and 2012; obliged a double glazing company to make changes to its business practices; and secured a fine of more than £380,000 from a healthcare firm that had been part of a cartel.

The OFT has this year also written to more than 170 universities and other higher education institutions, warning that stopping students graduating or continuing with their courses if they owe money for debts other than non-payment of tuition fees could breach consumer laws.

The OFT investigated the matter after receiving a complaint from the National Union of Students, finding that around three-quarters of higher education bodies were sanctioning students for non-academic issues, such as returning library books late or arrears in childcare fees.

However, the highest-profile case of 2014 was the OFT’s warning to online games developers and publishers that they have until 1 April to make sure their games comply with consumer protection laws, particularly where children are involved. The warning came after numerous incidents where children had run up three-figure bills by buying extra features – such as more ammunition or new characters – for mobile games without their parents’ permission.

The OFT said that to comply with consumer protection laws, the games had to be transparent about what extra features would be advertised for sale; should warn consumers about what personal data may be shared with other companies for marketing purposes; and should not accept any purchases without the consent of the payment account holder – usually the child’s parents.

The OFT is clearly a dynamic and multi-faceted organisation. Collins reflects on his role in its development: ‘My focus has been on building a board and senior management structure that complies with the best principles of corporate governance. I have not been involved in the day-to-day casework so much as ensuring that we are appropriately focused on strategy, policy, reputation and risk.’

He adds that the board’s executive and non-executive directors worked in commerce before joining the OFT, giving them the perspective to recognise risk and understand how misunderstandings in business can occur.

Much of his own work, says Collins, has revolved around decision-making within the OFT and also the development of a framework for identifying and penalising cartels. ‘Progress has been slower than we hoped in the cartel area,’ he admits. ‘We had underestimated the difficulty of running cases to a criminal standard of proof.’

He claims the OFT has done more work with businesses on competition and compliance law than any comparable agency worldwide. ‘The feedback is that we have managed to raise competition law way up the boardroom agenda,’ he says. ‘In-house lawyers tell us that the OFT has been instrumental in driving competition law forward, which is good for consumers and the economy generally.’

Collins turns to the subject of how cases are selected by the OFT: ‘Some we spot just through watching the market and being alert to abuses,’ he responds. ‘Others we hear about from consumer and business groups, such as Citizens Advice and Which?. Others still come from internal staff initiatives – it was a member of staff who picked up the online games story.’

Another route to identifying cases that need investigation is the OFT’s ‘leniency policy’, in existence since 2000. The policy, Collins explains, allows immunity from prosecution for the ‘first through the door’ to confess to its involvement in a cartel. The company in question must co-operate fully with the investigation. The OFT also has a ‘cartel hotline’, which informants can call and speak in confidence to a member of its cartel team. Informants, says Collins, can be ‘financially rewarded’ for tipping off the team.

The OFT is proud of its record, but it is to close on 31 March and, along with the Competition Commission, become part of the Competition and Markets Authority (CMA). The CMA, which was established under the Enterprise and Regulatory Reform Act 2012 and came into being in October 2013, is to be the single body responsible for promoting competition, within and outside the UK, for the benefit of consumers.

Collins recalls that the merger of the three bodies was announced as long ago as 2010 and has required a ‘huge amount’ of work. ‘There have been some redundancies over the last year, but we have concentrated on transferring people and work into the new body. The government has made more money available to the CMA, in particular for its work on rooting out and closing down cartels.’

What next on the agenda? ‘I might take six months off,’ he replies, ‘because, after all, I had no break between Lovells and Wilmer, and Wilmer and the OFT.’

Collins has already been approached by various organisations, he says. ‘But my main interest is likely to be investing in small and medium-sized enterprises (SMEs) that are struggling to get into markets because the incumbents, afraid of competition, are trying to block them or because government legislation is not sympathetic to new small business models.

‘I’ll be putting my money where my mouth is, with any return coming from my investment in the SMEs, not from a consultancy fee, which would be a drag on profitability.’ Collins insists that the new enterprise would not be merely a part-time hobby to keep him occupied during retirement, but would require developing a portfolio of investments and managing it.

‘I also want to become engaged in the international charity sector,’ he says, ‘using my legal skills and knowledge of governance issues to help charities prosper.’

Leaving the OFT is ‘emphatically not’ the end of the road, he declares.