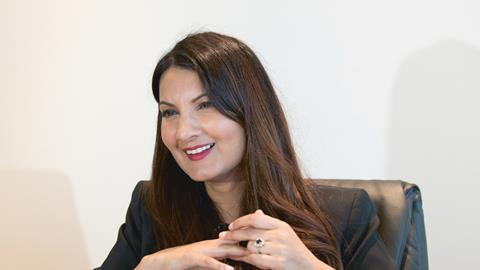 Lancashire-born litigation solicitor Faridah Sarah has moved overseas to practise in a country characterised by superlatives.

A desert realm which boasts the world’s largest dancing (or at least musically synchronised) fountain, shooting jets of water 500 feet (152m) into the air – or as high as a 50-storey building. It is home to the world’s only seven-star hotel and, in a country where summer temperatures average 41C (106F), it also offers the luxury of an indoor ski resort complete with snow. The sun shines from blue skies nearly every day of the year, the sea is warm and the beaches are golden.

Sarah has, of course, relocated to the Gulf emirate of Dubai.

She insists that Dubai’s credentials as a holiday destination of choice are not the reason she moved there. She tells the Gazette: ‘The opportunity arose at a stage in my career when it made sense to experience life and legal practice in a different jurisdiction. Dubai is rapidly becoming a global leader in commercial dispute resolution and arbitration. It is an increasingly popular destination for businesses from all over the world. Dubai offers them quick and independent justice, certainty and transparency.’

Certainly, Sarah’s caseload in Dubai has allowed her to expand her already considerable commercial litigation experience. When she moved out to Dubai in 2012 to join Galadari, one of the oldest full-service regional law firms in the Middle East, she brought with her an 11-year track record of dealing with cases ranging from contractual disputes to shareholder, partnership and professional negligence claims.

One such case saw her advising a New Zealand company that was being sued by a European company for around £1.76m for an alleged breach of contract over the supply of biogas equipment. Another required her to deal with a matter brought against an insurance adviser accused of giving negligent advice relating to a business interruption policy – advice that, it was claimed, resulted in substantial underinsurance and significant losses when a claim of more than £1m was made.

Since starting at Galadari, senior associate Sarah has had to adjust the way she practises.

‘All law onshore – as opposed to offshore – in Dubai uses civil law, not common law, and is conducted in Arabic,’ she explains. ‘So I had to do a lot of reading when I first came here to familiarise myself with different rules and procedures around civil law. I also had to get used to briefing my Arab colleagues as though they were barristers, because I don’t have the Arabic language skills necessary to advocate on behalf of clients. I tend to use the same few lawyers all the time, which makes the whole process much easier.

‘And then there is the offshore work, which revolves around common law and conducts proceedings in English.’

Sarah is alluding to the work she does in the Dubai International Financial Centre (DIFC) courts. These courts, which began operating in 2006, are an independent English language common law judiciary with jurisdiction covering civil and commercial disputes regionally in Dubai, and also worldwide. DIFC courts are one of the three major global blocs for English language commercial dispute resolution. To the west, there is London, which is the market leader for enforcing European and US rulings. To the east, there is Singapore, whose rulings are generally enforceable across Asia. And then there is Dubai, whose main arena is the Middle East.

Sarah is one of the litigation specialists in the Galadari team that, at the end of 2014, opened a DIFC office, the firm’s fourth in the United Arab Emirates (UAE). Its other offices are in Abu Dhabi, within onshore Dubai, and in the Jebel Ali free economic zone (JAFZA), which is near Abu Dhabi.

She is also a member of the DIFC users’ committee, which meets regularly to discuss cases of particular interest and how processes can be improved. ‘The committee meets with other jurisdictions to set up memoranda of understanding to help ensure the enforcement of DIFC judgments,’ she says. ‘We have signed such treaties with New York, Singapore and London, so far. The treaties have no binding legal effect. They are more treaties of co-operation to make life easier for everyone.’

Sarah says: ‘I wanted to be on the committee because I’m doing an increasing amount of DIFC work and less and less litigation onshore. So I need to be aware of what’s going on. I’ve been on the committee for a year so far, but have to stand down after two years.’ The DIFC, she adds, puts on training for UAE lawyers to strengthen links between offshore and onshore practitioners, and also generally to improve local knowledge of common law.

The Gazette reminds Sarah that the DIFC is one of several financial centres in the Gulf, such as the Qatar Financial Centre and the new Abu Dhabi Global Market, all of which have legal systems based on English common law. What makes DIFC stand out from the crowd?

She points to a 2011 law, which she describes as a ‘watershed moment’ in the development of the DIFC, that allows the courts to hear any commercial or civil dispute with the consent of both parties, even when there is no geographical or other connection to Dubai. Since the law’s enactment in 2011, she says, the volume of claims has increased threefold and the average value of cases is up from £2.9m to more than £7.4m.

Sarah says that it is this freedom to hear cases with no direct connection with Dubai that brought the DIFC its most high-profile case to date. Judgment was handed down in August 2014, when the DIFC court ruled that Switzerland’s Bank Sarasin had mis-sold more than £135m of investment products to the Khorafi family from Kuwait.

According to court documents, the bank had assured the Khorafis that they would ‘never lose money’, which proved not to be the case. The court ruled that it was a ‘clear case of financial mis-selling of unsuitable investments to an unsophisticated investor and to his equally unsophisticated wife and mother’.

The judgment did not specify how much compensation the bank must pay, although the Khorafis asked for more than £18m. Sarah says the ‘complex, high-value case’ is of the kind that would have been handled in Europe or the US until recently, not in Dubai. It has ‘boosted investor confidence in the DIFC’, she says, highlighting its status as a ‘global actor’.

The DIFC, Sarah says, is constantly evolving. For example, it implemented the Middle East’s first pro bono programme in 2009 and, more recently, in February 2015, introduced a new practice direction that is expected to facilitate international enforcement of judgments in over 150 countries and speed up the settling of commercial disputes.

The DIFC also established the region’s first small claims tribunal (SCT), which, Sarah says, has been extraordinarily effective: ‘Some 90% of all cases before the SCT are dealt with within three weeks. Parties are not allowed legal representation because the SCT aims to ensure equality of arms before the law.’

Another first for the DIFC was appointing the UAE’s first woman judge.

Sarah is experiencing expatriate life in a society very different from her native country. The dress code, for women in particular, is restrictive and one is expected to respect the month of Ramadan by not eating, drinking or smoking in public. There are poisonous red-backed spiders and ants that move en masse, like an army on the march. Briefing one’s Arabic speaking colleagues apart, is practising law in Dubai equally alien? Sarah replies: ‘The international scope of the DIFC makes legal practice here very similar to legal practice in the UK. Much of my work here, like it was back home, is focused on litigation and dispute resolution.’

The Gazette asks for a thumbnail sketch of her typical caseload. Sarah responds with five main areas.

‘Litigation around real estate,’ she says. ‘Dubai is growing and so there is lots of construction going on. It all stopped with the 2008 economic crash and took a while to resume and for investors to come forward, but in the past year it has picked up immensely. I deal with some of the disputes that arise when developers and contractors fall out, for instance, or when suppliers let the builders down.’

Partnership disputes also cross her desk, Sarah says. These typically arise when an audit reveals ‘anomalies in the accounts’ and actions are begun against another partner.

Shareholder disputes are much the same, she adds, where one shareholder wants to get rid of another.

Sarah also handles cases of alleged breaches of contract that can concern anything from failure to pay on time to not delivering goods on time, both of which can cause financial loss to a party. ‘For instance,’ she says, ‘I had a recent case where one party refused to pay £1.15m for goods received. It is quite usual here for companies to offer post-dated cheques for goods, which can then bounce and trigger proceedings to recover the money owed.’

Sarah’s fifth area is professional negligence, where someone suffers financial detriment from acting on bad advice from, say, a bank (as in the Khorafi case above), lawyer, accountant or financial adviser.

Has Sarah any last words on Dubai and on practising law there? ‘I’d been to Dubai on holiday and liked it,’ she replies. ‘I still like it. So far, so good.’

The Gazette interviewed Sarah by Skype linking London and Dubai