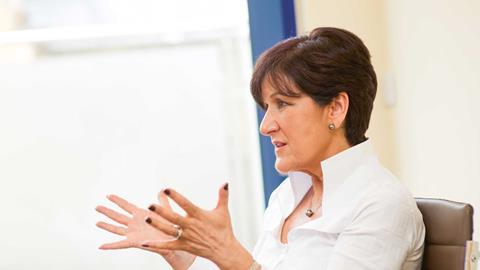 Dealing with warring couples has not given divorce lawyer Marilyn Stowe a jaundiced view of human nature. Quite the reverse.

It was after she had survived an attack by three masked men armed with metal bars that her firm ‘really started to fly’, family law solicitor Marilyn Stowe tells the Gazette. The December 2003 robbery, which happened outside the converted cobbler’s shop in Halton, east Leeds, where she had started her legal practice some 20 years earlier, prompted her to move away from the scene of the crime and to new premises in Harrogate.

That was April 2004, since when, as Stowe Family Law, she has opened further offices: in central London; Hale and Wilmslow, Cheshire; and in Wetherby and (again) Leeds, West Yorkshire. ‘There may be big firms with bigger family law departments than us,’ she says, ‘but we believe that we are the country’s largest specialist family law firm, with a 44-strong team, including 30 solicitors.’

Stowe has crammed a lot into the years since she was admitted to the roll in 1980. She married and had a son, who is currently a trainee with a City firm after gaining a first-class law degree at Leeds University. She has appeared on TV and radio, written several books and, acting pro bono, unearthed the medical evidence that freed solicitor Sally Clark, wrongly imprisoned for killing her two infant sons. She has been a member of two legal advisory groups to the Law Commission, is a qualified arbitrator and has been described as a ‘formidable’ divorce lawyer by The Times.

Her family on both sides are descended from penniless Russian immigrants who arrived here after fleeing the anti-Jewish pogroms of the 19th and early 20th centuries. Like so many immigrants, they were unafraid to work hard. ‘My grandfather had a sweet stall in the market,’ recalls Stowe, ‘and, in the late 1940s, my grandmother was one of the first women journalists on the Yorkshire Evening News [absorbed into the Yorkshire Evening Post in 1963]. My father became a runner for the same newspaper when he was 14 years old.’

Stowe’s mother wanted her daughter to have a career rather than, as was traditional for a Jewish woman of her generation, to marry young and start a family. And so Stowe went to the prestigious Leeds Girls High School followed by Leeds University, where she read law. At that stage, international law was her particular interest and earned her a lectureship at Le Mans University. ‘After I’d been a year in France,’ she says, ‘my father phoned me to say it was time to come home and do some real work.’

She dutifully returned home for articles with Leeds firm Zermansky & Partners and was admitted to the roll in 1980. By 1982, she had joined Leeds firm Grahame Stowe Bateson (she was later to marry Grahame Stowe), where her commercial clients included her father and his rapidly growing business. It was in the late 1980s and early 1990s, around the time that her father’s company was becoming too big for a non-specialist commercial lawyer to handle, that a perceptible increase in the divorce rate turned Stowe’s attention to family law.

‘Up until the 1970s, women on the whole didn’t work,’ she explains. ‘It was still very hard for women to get divorced because they didn’t have a job – even their maintenance income was taxed – and they had families to support.’

But then it all changed, she continues, with ‘contraception coming into vogue’ and women increasingly expecting to go out to work and have careers. And with this new independence came a new willingness – and the financial means – to escape an unhappy marriage through divorce.

Has dealing day in, day out with warring couples given her a jaundiced view of life? ‘Quite the opposite,’ Stowe replies. ‘It has given me a great belief in human nature. We are basically all the same, with the same fears, loves, anxieties, ambitions, priorities.’

She adds: ‘Divorce often brings out our very worst qualities, agreed, whether it’s through guilt, anxiety, anger, refusal to see what is staring us in the face, bitterness, envy, fear or anything else bad. It is an emotional rollercoaster. When people are really hurting, particularly if they have been “swapped” for somebody else, self-preservation becomes all-important. For some, such a state of mind leads to an all-consuming hatred, malice and burning desire for vengeance. I don’t put my clients in that situation. It is my job to get them out of it and show them that there is a future.’

Returning to the ‘desire for vengeance’, has Stowe had clients who have gone to extreme lengths to get even with a cheating spouse? ‘After all my years as a divorce lawyer, nothing surprises me anymore,’ she replies.

She recalls a case where the wife sold her pianist husband’s Steinway without his knowledge and another case where the wife sawed the legs off a Chippendale cabinet, then delivered it – along with the amputated legs – to her errant husband. She adds: ‘There was also a wife who ran a bath of scalding water and bleach, into which she dumped all her husband’s suits and ties.’

She goes on to list her ‘top 10 dirty divorce tricks’, which include: using a friend to spy on your spouse; spending money wildly; sending a late night email to the spouse’s colleagues, friends and family with details of their infidelity; hiding money and valuable assets, which mysteriously reappear once the divorce is finalised; and moving, with your unsuspecting spouse, to a foreign country where the divorce regime is more favourable.

Yet, this is not the demoralising part of her work and career, she says. That has been witnessing a growing number of people no longer able to afford representation by a solicitor. ‘It used to be that everyone had a solicitor,’ she says. ‘If you were poor, you got legal aid. If you were on a middling income, you got some legal aid and contributed the rest yourself. And if you were rich, as is still the case today, you paid for it all yourself.’

Now, she says, ‘we are seeing a rise in litigants in person (LiPs), which is very troubling. Family law is not a formulaic kind of law. You need someone – a lawyer – who understands the law and can apply the relevant factors to individual cases’.

Stowe is similarly concerned about couples who turn to the internet for a ‘cheap’ divorce. She says: ‘The law around divorce is nuanced and sophisticated. It is rarely, for example, a simple 50-50 split of assets. Only this week, a new client came to me who had messed up his online divorce.’

The main problems for both LiPs and do-it-yourself online divorcing couples is ‘burying your head in the sand for too long’ or doing quite the opposite, says Stowe. In the first case, you never progress and just leave things to deteriorate still further, while in the second case you act in ‘too much of a rush’. Stowe says: ‘It might have seemed like a good idea to put the house on the market straightaway, but what happens if it is sold before you decide who is to have what? You could both find yourself with nowhere to live and having to pay rent.’

In 2007, Stowe was a member of the legal advisory group to the Law Commission when it reviewed the rights of cohabiting couples. The Gazette asks whether the confusion around cohabitation endures. ‘Very much so,’ she replies. ‘Cohabiting is virtually the norm before marriage these days and it is easy to drift into having children. Couples don’t heed the law because, at that point, it doesn’t impact upon them. It’s a different story when things go wrong.’

Stowe advises cohabiting couples to take advice – ‘gen up on the internet’ or read her book Divorce and Splitting Up. ‘You certainly mustn’t contemplate buying a property together without knowing your respective rights and obligations,’ she cautions.

What did the Law Commission decide? ‘Any proposed new legislation was put on the backburner,’ Stowe says. ‘It was a hot potato politically because, the critics argued, it devalued marriage. My view was the opposite. It would have created a level playing field for cohabitees who otherwise, because they have no so-called “common law rights”, find themselves out of home and pocket.’

Stowe was one of the first family solicitors to qualify, on 22 February 2012, as an arbitrator under a scheme launched by the Institute of Family Law Arbitrators. The institute and the scheme arose from collaboration between non-confrontational divorce group Resolution, the Family Law Bar Association, the Chartered Institute of Arbitrators and the Centre for Child and Family Law Reform. The Gazette asks her to spell out the advantages of family law arbitration.

‘Arbitration has long been used to resolve commercial disputes and now we are applying it to family law, too,’ she responds. ‘It is fast, confidential and, in many cases, much less expensive than court proceedings.’ She continues that it is also flexible, with the arbitrator having considerable discretion about the procedure through which a fair result can be achieved by applying English law.

Looking to the future, what changes would she like to see to family law? She replies that the law, quite rightly, is ‘very child-focused’, but should also become more focused on the parents. ‘It is so child-oriented that some parents feel excluded by the law, which has led to the creation of activist groups such as Fathers4Justice.’

In common with the Gazette, she was at the now notorious Law Society conference in Manchester in November 2004 when Fathers4Justice invaded the auditorium and one activist handcuffed himself to the then children’s minister, Margaret Hodge.

Stowe has achieved much, graduating from a converted cobbler’s shop in east Leeds – albeit one, she tells the Gazette, modelled along the lines of the 1986-94 TV legal drama series LA Law – to an office abutting London’s Gray’s Inn and with several other offices in the north of England. And yet this reputedly ‘formidable’ lawyer retains much of the optimism, tempered by modesty, of the Leeds grammar school girl who, in an era when women were less likely to do such audacious things, read law at university and started her own law firm.

One can’t help but suspect that those three masked robbers were let off lightly.