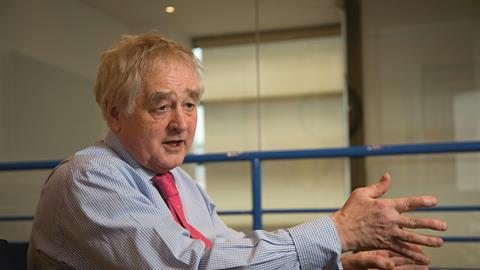 Allen co-founded his eminent London firm from a Euston squat while still in his twenties. Nearly forty years on he remains an innovator, hears Jonathan Rayner.

Patrick Allen was just 27 and living in a squat near Euston station when he negotiated an overdraft to set up law firm Hodge Jones & Allen (HJA). Was the bank manager brave or simply reckless?

Allen shrugs. ‘I was going to be a lawyer,’ he says. ‘In 1977, that was a secure and well-paid career choice.’ The bank manager made a wise decision. HJA has thrived, first on legal aid cheques for criminal defence work, latterly on high-profile cases representing bereaved families, women pressed into modern slavery and other victims deprived of access to justice.

Allen sat as a deputy district judge for around half of his almost 38 years in practice. An engineering graduate with a flair for mathematics and computer programming, he has also championed the role of IT in the legal profession. Allen spearheaded the publication of HJA’s 55-page Innovation in Law Report 2014 and donated money to the Labour party’s general election campaign.

In 1977, being a lawyer was a secure and well-paid career choice

Why opt for a career in law? Allen says that while at St Catherine’s College, Oxford – where he read engineering and economics – he took part in a student protest to stop the South Korean ambassador from addressing the Conservative party-affiliated Monday Club. The students, arms linked, faced a line of policemen, some of whom – unprovoked, Allen says – dragged his friend from the line. ‘He was charged with kicking a police officer in the groin and convicted of assault,’ he says.

‘We took the case to appeal. I testified as a witness, saying that nothing of the sort had happened, and my friend was eventually acquitted.’

It was a ‘turning point’, Allen says: ‘I discovered that the law was more than just about wills and conveyancing. It was also about the rights of the citizen and liberty. It could be used to help progressive causes. I was determined to become a lawyer, to fight against injustice and use the law constructively to improve people’s lives.’

A year’s conversion course ensued, with two years of articles at London firm Offenbach & Co. This was another formative experience: ‘The firm brought in an endless stream of fascinating cases. One I worked on was a murder case revolving around the forensic investigation of blue fibres found on the gags and towelling used to strangle a woman. We instructed a barrister called John Mortimer. It was an invaluable experience for a trainee.’

While at Offenbach, Allen met trainee Peter Jones. Upon Allen’s qualification as a solicitor in 1977, the pair were to team up with a third lawyer, Henry Hodge, to found HJA. ‘It all happened in a whirl,’ he says. ‘The three of us were keen to run our own firm. We talked about it a lot. And then, after meeting in a pub one evening and downing two pints of strong beer, we made the decision to go ahead.’

Hodge, who died in 2009, married Labour politician Margaret Hodge (nee Oppenheimer) and became only the third non-barrister to be appointed a High Court judge. Jones left practice in the 1980s to pursue an academic career, becoming senior pro vice-chancellor, academic development and research, at Nottingham Trent University law school before his retirement in 2011.

Allen became – and remains – managing partner; he combined this with the role of senior partner on Henry Hodge’s retirement in 1998. The early years were mostly concerned with legal aid work for crime (as duty solicitors), family, housing and general litigation. ‘It was a matter of watching and controlling work in progress,’ he says. ‘The legal aid cheques would arrive twice a month and every so often we would go and reassure the bank manager that things were going well.’

We move on to HJA’s Innovation in Law Report 2014, a diagnosis of what is wrong with today’s profession with suggestions regarding what can be done to make things better. Why didn’t the Ministry of Justice or some other state body consult with practitioners and prepare the report?

‘They wouldn’t have liked the answers,’ he replies. ‘The profession has been through a period of great turmoil. The driver throughout has not been to improve access to justice. It has been about cutting costs [for companies, employers and government]. The law should exist to stop individuals being victims of oppression. That is no longer the case.’

The report has been remarkably successful, Allen says, with some 8,000 copies so far downloaded from the website. ‘That shows the power of digital communications,’ he says. Who were the main contributors? ‘We tasked everyone in the firm to brainstorm on innovations.’

How about ‘innovations’? One proposal, to compensate for the loss of legal aid, is that the government should provide free telephone and online access to a government-funded legal help centre, as in the Netherlands. Another is that the courts should deduct a percentage of damages from all criminal confiscations and put them into a contingency legal aid fund, like a scheme in Hong Kong. A third proposal is to reduce or remove VAT from solicitor and barrister fees when they are representing individuals in certain privately funded cases.

How about repairing the reputation of lawyers? We should work together to take the message about the profession into our schools and provide structured work experience and internships to state school students, one report contributor suggests. Another says we should lobby for home working and career breaks across the sector, a proposal supported by 71% of legal professionals. A third suggests we should learn from such companies as Google and Microsoft how to create a better working environment.

Has Allen a pet proposal? ‘Improved IT,’ he replies. He goes on to instance the ‘horror story’ of issuing a claim through the government’s centralised facility in Salford for handling money claims in civil cases. ‘We have to take a claim to the Mayor’s Court in the City of London, where it is date-stamped, put in a box and taken to Salford, where it is date-stamped again,’ he says. ‘All this is for the government’s convenience, nobody else’s. What would happen if the van delivering the box crashed? Would our claims be scattered across the road?

‘Basic, simple technology would allow the fee to be paid online and the claim delivered electronically. It would be almost completely paperless and save everyone a fortune. But the government appears to have set its heart against innovation. If private practice had the same attitude, we would all still be using the first computers to come on the market.’

He adds: ‘I was a deputy district judge for 19 years and in all that time got to use a court laptop on just three occasions. Once I pressed “print” and the document duly emerged from a printer in another building. I would use my own iPad to calculate mitigation of costs in court. I had no real choice. There were no precedents or books to hand. I normally had to use my own paper and pen. Such inefficiencies are instantly curable, and yet when the profession came up with a no-cost IT system for the courts the government ignored it.’

Is the government not wary of IT because of the cybercrime threat? ‘Cybercrime fears are overstated,’ he asserts. ‘We’ve all been practising for years with email, using just Outlook encryption, and I’m not aware of any serious cases of data being stolen.’

Does he have another pet innovation? ‘The paperless office means not wasting space storing paper,’ he says. ‘You can throw away filing cabinets and cupboards so that economic activity – fee-earners earning fees – could happen in their place instead. You don’t need to pay for printing or ink. And you don’t need to employ clerical or secretarial staff to file papers.’

What do you do about colleagues who dislike reading long documents on screen? ‘They have to learn to evolve with the times,’ he replies. ‘They already have at HJA. We now scan incoming post so that everyone gets electronic post only. The original paper copies are held in a box for a few weeks and then shredded.’

We move on to some of the high-profile cases his firm has handled. He responds with a definitive list of the biggest and most complex personal injury and multi-party cases of the last few decades. He played a lead role in litigating on behalf of claimants following the 1987 King’s Cross fire, when 31 people died; and the 1989 sinking, with the loss of 51 lives, of Thames pleasure boat the Marchioness. He also led the HJA team that managed gulf war syndrome claims for UK military veterans (1998-2004).

He is still acting for a number of Irish women caught in the scandal of the Magdalene Laundries. They are from troubled family backgrounds and, as children, were ‘adopted’ by the Irish state and placed in so-called industrial schools, where they were abused and exploited as forced labour. Upon reaching school-leaving age, many were transferred directly to one of the Magdalene Laundries run by the Catholic Church. There they worked as slaves, unpaid and unnoticed by society, often on contracts with the Ministry of Defence and other state bodies. The Irish government is resisting paying compensation.

Drawing the interview to a close, the Gazette asks about his donation to the Labour party’s general election fighting fund. ‘We have enabled the funding of a full-time researcher to help the party fine-tune its message on economic policy,’ he says. ‘It’s working. The Tories stood up at 9am one day with a “dodgy dossier” intended to lay bare the failings of Labour’s proposed measures on the economy. By 5pm, we had rebutted the dodgy dossier and the story had become our rebuttal, not our supposed failings.’

It all started when he was a student protesting against the Monday Club, then closely associated with the more radical elements of the Conservative party. Today, no longer a student but a successful businessman, Allen is subsidising the Labour party’s election campaign. Much has changed for Patrick Allen, but some things have stayed the same.