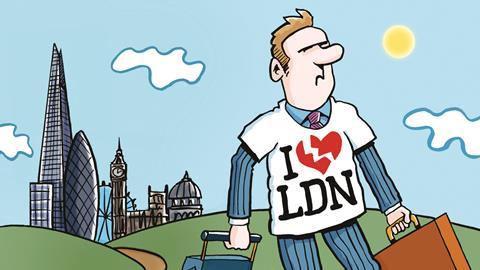 How to: leave the City

More solicitors than ever work in the City, but some decide it’s not for them. What then? Eduardo Reyes reports.

One-time finance lawyer Ed Jeremy tells the Gazette: ‘Overall, I had a really good experience at Linklaters, for which I am very grateful. But I have never looked back.’ Jeremy is now a prosecution counsel at the International Criminal Court – an ambition he took years to realise.

Jeremy signed up for the magic circle firm in his second year at university. ‘I don’t think many people really know what they want to do at that age,’ he reflects. ‘Their decisions are driven by factors [including] student debt that may change over time.’

It can be hard, Jeremy says, to leave a City career: ‘You tailor your lifestyle to the high salary. You are competing to climb the corporate tree, while being too busy, or perhaps too competitive, to step back to consider whether you’re climbing the right tree, or – to stretch the analogy further – are even in the right forest.’ He adds: ‘There is a culture of believing that your skillset is, at least by a certain stage of PQE, so specialised that you could not possibly do anything other than your current role.’

Motivations for overcoming those obstacles vary. They can include the need or desire to be nearer family – for convenience, or because a family member’s care needs have increased. A move could enable a passionate private interest to be pursued. Or lawyers may want a different sort of client – whisper it, but high finance can be a little dull at times.

It could be what is broadly labelled a ‘lifestyle’ decision. ‘A short commute, friendly colleagues, excellent clients and enough fresh air to breathe life into any career,’ says Timothy Taylor, a partner at Foot Anstey, of his move to the south-west. ‘What’s not to like?’

As Hays Legal business director Alison Pendleton observes: ‘Some have spent most of their careers in London and may be looking for a better work-life balance.’ Popular destinations for lawyers moving out of London, she notes, are Bristol, Manchester, Birmingham and Leeds. ‘We are also seeing more firms based closer to London, such as in Guildford, attracting ex-City lawyers by offering City work with an improved work-life balance,’ she adds.

One should not pretend however that the Square Mile is losing its mojo – quite the reverse. Since the financial crisis, the number of solicitors working in the City has soared by about half to 27,000 – 20% of the profession. Instructions do not always land conveniently near an ageing parent or a Cornish beach. And being ‘City’ does not guarantee that the people able to offer you the opportunity of a new start will see you as a once-in-a-lifetime candidate to be snapped up in short order.

A starting point, Jeremy suggests, is not just to identify what you want, but also what working in the City has given you: ‘The skills and experience that I gained during almost seven years at Linklaters, irrespective of my specialism in asset finance [and] banking, have served me very well as a prosecution lawyer at the UN ICTY [International Criminal Tribunal for the former Yugoslavia] and now at the ICC.’

He explains: ‘As in any quality law firm, the importance of professionalism, teamwork and painstaking attention to detail are drummed in to you to the point that they become second nature. That is very valuable to me now.’ In addition, Jeremy notes, the drafting and negotiation skills gained at Linklaters ‘prepared me well for drafting written legal submissions at the ICTY and the ICC’.

The law firm experience of working to testing deadlines, and under pressure, also prepared him ‘to some extent for witness preparation responsibilities, and life on your feet in the courtroom – [though] the subject matter is obviously rather different’.

Timothy Taylor also puts a value on his time in a City practice. ‘Should I have done this years ago?’ he asks. ‘Probably not – everything has its time and place.’

Many alternative roles require less of a conceptual leap than war crimes lawyer, of course. Pendleton notes: ‘City lawyers will generally find it relatively easy to find jobs in the rest of the UK, as their experience is in high demand in a market in which competition for skills is high across the country. The only exception may be a niche area that is only undertaken in the City; although moving into a related area is often possible.’

There is, however, no escaping the fact that financial rewards are mostly much lower elsewhere. Candidates seeking a move must enter into the process with their eyes open on this point, Pendleton says: ‘Firms should also emphasise the benefits they have to offer other than salary,’ she advises, while noting that in future there could be a reason for rewards to rise: ‘If non-City firms are to attract candidates on a larger scale away from London, the salary gap will need to narrow.’

When investigating their options, Pendleton says ‘candidates will usually ask questions about the firm, client base, and the structure of the firm, as well as the questions we’d expect candidates to ask in any interview around rewards, working hours and career progression.’

Although Jeremy is frank about how the lure of City rewards can make moving seem harder, with thought and planning those Square Mile salaries give people options. His wife was also a City lawyer – at Fieldfisher – and shared his ambition to work in international justice. ‘My wife and I basically spent three years without an income after we left our firms, studying and volunteering,’ he recalls.

The change they sought to make required planning – and some luck. ‘Upon resigning in January 2009, we went to Cape Town to study for master’s degrees,’ he says, ‘then spent the following two years gaining experience in various UN and civil society organisations in South Africa, Ghana and Tanzania, before returning to Europe. We were then unpaid interns in The Hague before gaining full-time positions in 2012 – my wife at the Special Tribunal for Lebanon and myself at the ICTY.’

For Taylor, even staying in the same practice area involved change – fortunately of the type he was seeking. ‘I was looking for new challenges,’ he says. ‘New clients, new parts of the country to learn about. I am a planning lawyer, so understanding local issues is key to my work.’ He also wanted (and got) ‘the opportunity to grow a new team’.

A more difficult pitch is to convince a firm to start a new practice area, though it can be successful. In Pendleton’s experience ‘hiring an ex-City lawyer can give regional firms access to specific skills and experience that may not be available locally, particularly if the firm is expanding into new practice areas.’

For such a move to work, lawyers need a realistic view of what work might follow them. Client loyalty to individual lawyers can be overstated, or even when present, affected by restrictive covenants. Expectations will vary, Pendleton advises: ‘This is not usually necessary unless moving at partner level.’

If the lawyer seeking a move is essentially their firm’s ‘expert’ in the field, there may even be an amicable solution whereby clients transition with their lawyer – old and new firms collaborating to serve a client’s needs.

Barriers to a move

How it can work

Before or immediately after a move, success can depend on a lawyer paying attention to their network or networks. One lawyer who moved to Lincolnshire from a mid-sized City firm tells the Gazette: ‘The work I wanted is here, but I had to work hard at establishing the relationships [that] getting it relies on.’

Sources of work feel less ‘visible’, she notes, in a more sparsely populated region. She joined local business groups, such as the chamber of commerce; went to events; and even attended meetings organised by a professional networking company. ‘It may be a reflection of being further on in my career,’ she says, ‘but the connections I’ve built here feel like the strongest I’ve ever had.’

While a lawyer who moves to the edge of Dartmoor or the Pembrokeshire coast is still there to work, those contacted by the Gazette said their ‘lifestyle’ goals had largely been fulfilled by the move. Taylor’s colleague, associate Emily Settle, concludes with a typical response: ‘A fresh approach with huge energy, topped off with flexible working – so even a corporate lawyer can put their children to bed while living the country dream.’

Eduardo Reyes is the features editor at the Gazette

Over a quarter of the UK top-100 are headquartered in parts of England and Wales outside London (though many also have a London office).