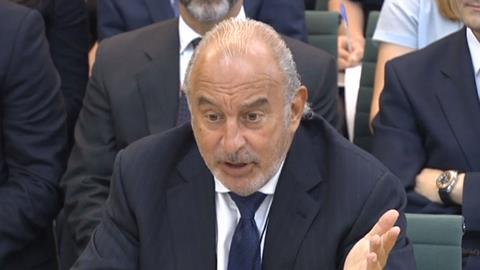 International firm Olswang lent credibility to the twice-bankrupt Retail Acquisitions owner Dominic Chappell despite not knowing him from a ‘hole in the wall’, Sir Philip Green told an inquiry into the collapsed retail giant BHS today.

Green (pictured) claimed that Olswang, which advised Retail Acquisitions when it bought BHS for £1 in 2015, was ‘knee deep’ in the transaction until two days before the company went into administration.

Green was appearing before a joint session of the House of Commons Business, Innovation and Skills Committee and the Work and Pensions Committee.

The former owner of BHS said Chappell was the ‘wrong guy’ to sell to, but blamed Olswang and Grant Thornton, which also advised Retail Acquisitions, for lending Chappell ‘vital credibility’.

He said: ‘Rightly or wrongly I took comfort from those two firms representing him. They are respected firms.’

But Green said that neither of the firms, which he alleged were paid around £8m for their advice, knew the buyer from a ‘hole in the wall’.

He said: ‘From my enquiries I believe that both of these firms were on contingency agreements […] supposedly one of the firms bid for the business blind. They didn’t know the guy from a hole in the wall.’

He later asked: ‘If they didn’t know him from a hole in the wall, do they have any responsibility?’

Olswang and other legal advisers involved in the BHS sale appeared before the select committees last month. At the time Frank Field MP, chair of the Work and Pensions Committee, accused Olswang and Linklaters, which advised Arcadia, of failing to carry out proper due diligence on the buyer.

Linklaters later hit back at the comments, calling them ‘completely unjustified’. Olswang did not provide any details of the fees it charged in the process.