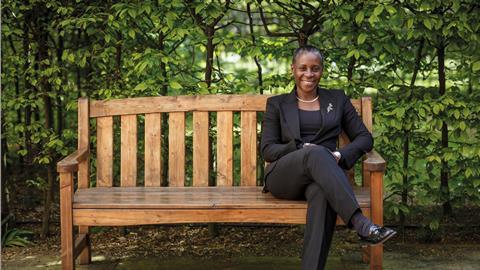 How will we persuade the politicians of the future to fund the justice system properly? Start teaching law to schoolchildren, new Law Society president I. Stephanie Boyce tells us 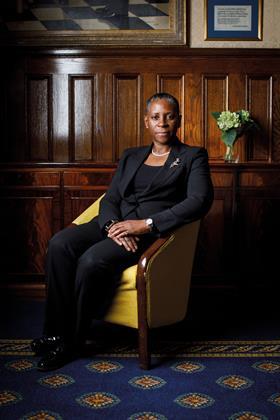 Trainee at Horwood & James, Aylesbury, qualifying in 2002; several in-house governance roles, including at The General Council of the Bar, Pensions Regulator, Ofsted and the Chartered Institute of Arbitrators, 2004-2017; director, Stephanie Boyce Consulting Ltd, 2017-

Making the legal profession more diverse and inclusive has been an avowed priority of many Law Society presidents over the last decade or so. This year, though, that aspiration is especially resonant. I. Stephanie Boyce is not only the first black president in the Society’s 177-year history, she is also the first president of colour. Moreover, in current vice-president Lubna Shuja she will be succeeded by a second president of colour – and another woman. No woman has yet succeeded another woman to the presidency. Indeed, there have only been six women presidents across those 177 years. Boyce and her putative successor are blazing quite a few trails.

Indeed. First-generation British, Boyce was born in Aylesbury, Buckinghamshire (where she still lives) and brought up in a single-parent household on a council estate. Her mother came to England in 1967 aged 15 to join her parents, who had emigrated here. In her teens, Boyce’s family relocated to the US, where she spent six years before returning to the UK to study law.

In her inaugural speech as president last month, Boyce made it her mission to leave a profession ‘more diverse and inclusive than the one I entered’ at the end of her tenure in 2022. In one sense she has already done so, simply through her own ascent. So what is it precisely that demands such urgency?

‘We know that while much is being done in the profession in this area, particularly at the entry level, there are issues still to be addressed when it comes to progression and retention,’ she replies. Boyce calls in evidence last year’s Law Society research paper Race for inclusion: the experiences of Black, Asian and minority ethnic solicitors. This exposed the many glaring demographic anomalies that endure, which Boyce has attributed to the persistence of ‘harmful stereotypes’.

She adds: ‘We know that some 8% of partners in the largest-50 firms are black, Asian and minority ethnic solicitors, and that this figure has stagnated. It hasn’t changed much in the last five years.

‘In terms of gender, 31% of partners in private practice are women. We know that there is a gravitation towards in-house; indeed, I gravitated in-house.

‘If you happen to be from a black, Asian or minority ethnic background [and you are] female, you are perhaps more likely to go in-house. So there is growing opportunity but still more to be done when you look at minority groups, particularly where some of those characteristics intersect around disability, sexuality [and] social mobility.’ 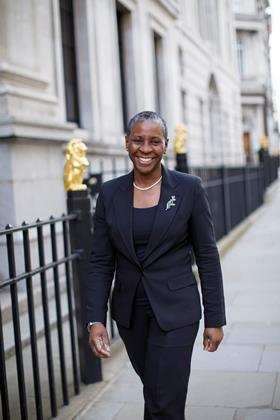 The number of solicitors identifying as black, Asian and minority ethnic (BAME) has increased dramatically in the last three decades.

Although the numbers indicate that the solicitors’ profession is representative of ethnic minority groups, black, Asian and minority ethnic solicitors continue to be underrepresented within the large international law firms based in the City.

At partnership level, BAME solicitors are better represented in smaller firms than in larger firms: 35.6% of sole practitioners and 22.2% of partners in two-to-four partner firms are from BAME backgrounds compared with 6.5% of partners in the largest firms (81+ partners).

Solicitors from BAME backgrounds are marginally better represented in the broad in-house sector than in private practice, making up 19% of practising certificate holders within government, 19% of those working in other in-house organisations and 16% of private practitioners.

Chancery Lane is certainly doing much to improve matters, she relates, through initiatives such as the Diversity Access Scheme and the Law Society’s social mobility ambassadors. Last year the Society also launched a series of roundtables under the heading ‘Achieving Change Together’, creating opportunities for the legal profession to work together in the cause of inclusion. ‘We need to come together, join forces and collaborate,’ Boyce stresses.

More potent catalysts are seen to be accelerating the adoption of good practice. ‘What the pandemic has done, what the Black Lives Matter movement has done, is really shone a light on the structural inequalities that continue to exist,’ says Boyce. ‘Now I see a real appetite for change and to move the dial.’

She gives the example of flexible working amid the Covid-19 crisis, and the beneficial impact its rapid normalisation could have on the working lives of women and disabled people. ‘In the past [disabled people] have been told that reasonable adjustments to enable working from home are not possible, for whatever reason. That view is no longer supportable,’ she argues.

If, as Boyce contends, the dial has not shifted on diversity and inclusion over the last five years in critical respects, why does she think the demographics could be different in another five years?

‘Data,’ she replies. ‘A number of larger firms have set targets that are achievable and measurable. This has to be a shared ambition among each and every one of us, because data drives change. Similarly, when we’re recruiting, trying to attract diverse colleagues, are we recruiting in the right publications and using the right language?’

Cultural barriers are also in her sights. ‘If, as a firm, your social events revolve around the pub, how inclusive is that? If you go off to play golf, and a person has grown up in a household that has never been exposed to that, you are excluding that individual to start with. We need to think all the time about being inclusive.’

All very progressive. Yet law firms are not social engineers; and nor is the Law Society, at a time when, arguably, social mobility in particular is actually deteriorating.

Boyce acknowledges the problem but has a ready solution: teach law in schools as part of a wider programme of public legal education.

‘I say that from two perspectives: access to justice and social mobility,’ she explains.

How many people actually think about the law until they’re caught up in the justice system? If we start to teach people then the government will have to take stock, because the public will acknowledge that the justice system has an important role to play in our society

‘Taking the access to justice point first, this pandemic has seen huge encroachments on our civil liberties, and many people have been unable to understand what this has meant for them. We also know, in the context of legal aid cuts, that if people are able to get early advice from a regulated, qualified, insured individual, that can help their issue from spiralling out of control.

‘From a social mobility perspective, when I look at my own circumstances, teaching law in schools at an early age would demystify some of the myths that exist around the profession. I didn’t see anyone who sounded like me, who looked like me. I don’t come from a privileged background.

‘That way, individuals would be given an opportunity from an early age to think about their career progression, their path into the law, what universities they might need to go to and the networks they should plug into and from where we know mentors and sponsors are drawn. I was in second year at university before I was asked, “have you thought of applying to this law school?”, “have you applied for this or that funding?”, “have you sought work experience?”.

‘Nobody in my family was a lawyer,’ Boyce adds. ‘But if we start to teach law in schools, we start to equip children and to empower them. They are then able to make informed choices about their lives and as informed citizens in a democracy.’ 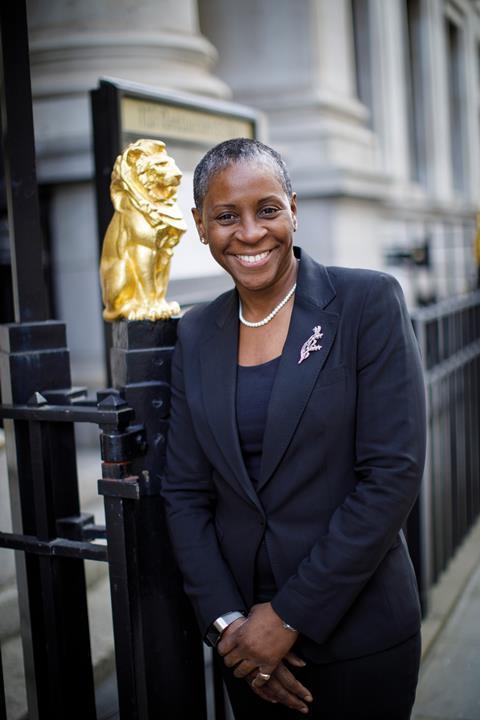 Public legal education might also aid the seemingly vain cause of a properly funded justice system. As former attorney general Dominic Grieve QC recently told the Guardian, few in government appear to be bothered about this, because ‘there are seen to be few votes to gain’.

Boyce says: ‘Let’s face it, people only go to a solicitor if they have a problem or, for example, they want a will or are buying a house. They don’t think about the justice system until they have to use it. We need to start telling the public about the law and justice, and how it affects everyday life – because the law impinges upon every aspect of your life.

‘How many people actually think about the law until they’re caught up in the justice system? If we start to teach people then the government will have to take stock, because the public will acknowledge that the justice system has an important role to play in our democratic society. That in turn will convert into votes.’

We conclude by turning to Covid-19 and the role played by Chancery Lane in supporting members throughout the pandemic with guidance, support, online platforms and training courses. Lobbying efforts have also borne fruit, such as the successful campaign on stamp duty land tax.

One immediate priority on the Society’s to-do list is establishing the optimal deployment of technology across the justice system as the crisis abates. In terms of running a legal business, says Boyce, ‘the pandemic did in a matter of hours what the profession might have taken 10 years to do – embrace technology’.

The ongoing benefits are more debatable in terms of interacting with clients, however.

‘Much has been said about the future of remote hearings, and they certainly have a role to play,’ Boyce points out. ‘For example, 85% of business and property cases have been handled remotely since lockdown began in March 2020.’

But she cautions: ‘We need to be careful in family and criminal proceedings, for example, where one is often dealing with vulnerable people. Anecdotally, what has been reported to us by members is that there can be serious difficulty in conversing with clients. We do think there is a role for remote hearings in terms of administration, case management hearings and so forth. But we caveat that by saying that there must be alerts on the system in terms of signposting people to where they can get legal advice.

Teaching law in schools at an early age would demystify some of the myths that exist around the profession. I didn’t see anyone who sounded like me, who looked like me. I don’t come from a privileged background

‘We’ve still got a digital skills gap,’ she stresses. ‘Not everybody has the infrastructure and ability to deal with their matter in this way.’ The Society has even heard stories of people spending over £100 trying to access their case hearing on their pay-as-you-go mobile phone, she adds.

The same goes for juries hearing cases remotely, which is understood to be under consideration in England and Wales to help clear a backlog of trials which has risen to a record 57,000. The move has already taken effect in Scotland. ‘It is a cornerstone of democracy that you are to be judged by your peers,’ says Boyce. ‘If you are interacting on the end of a laptop, it’s about those notes that might get passed, or the body language of the judge or your opponent, which you may pick up on [in person].’

She concludes: We’re aware we have been in a pandemic and we appreciate that certain measures have had to be put in place to keep the system up and running. But we are extremely cautious about technology being seen as a universal panacea.’