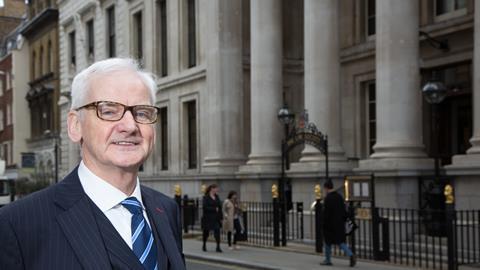 Off the buses: Joe Egan

Joe Egan ended up on the buses after he left school in Bolton. This was not because his A-level results were disappointing, but rather that they were better than his teachers had anticipated.

In the late 1960s, Egan took time out to re-apply for university; a gap year which he spent roaming the gangways taking fares on trips to Burnley, Preston and Blackburn. He loved it: ‘I had money in my pocket for the first time.’

So much so, indeed, that a few years later he was back, this time as a driver. A step up, literally and metaphorically.

Now 68, Egan has a more exotic backstory than many a Law Society president. He grew up in a more expansive age, when forging ahead in a ‘respectable’ career to maximise your earning potential was not the all-consuming imperative that it became in the yuppified 1980s.

After leaving Kent University, Egan roamed the globe. He worked for most of the time as a waiter, in distant climes stretching from Brussels to Darwin, and Philadelphia to Sydney. He set off on the Hippy Trail to Pakistan and was refused entry to Singapore for having long hair. This rebuff irritated him at the time, since it was only 30 years since the British had liberated the former colony.

‘Though, to be fair, my father was in the Pioneer Corps in Wales at the time,’ he grins.

So how did Egan end up back in Bolton, working as a solicitor? Not by design, certainly. He originally wanted to be a journalist, but neither the Morecambe Visitor nor the Bolton Evening News had any vacancies for a junior reporter.

In fact, Egan’s wanderlust was not slaked until he was 30. An academic at Manchester University told him that if he still aspired to a ‘proper job’, he could not afford to hang about much longer. So off he went to Trent Poly, where he did the CPE and then the Law Society finals.

After waiting tables and dispensing tickets, Egan found another calling with a couple of north-west legal institutions in (what became) Ralli and later Stephensons. He found that he ‘loved’ the criminal law, but although Stephensons had headhunted him, they were to part ways in not entirely amicable circumstances.

What happened was that Egan began prosecuting for the CPS, which did not have enough staff, as an agent. ‘It was a lot easier than defending because you generally had quality witnesses doing their best to tell the truth,’ he recalls.

This did not sit well with Stephensons’ jealous concern for its reputation in criminal defence, however. After handing in his notice, Egan was bustled off the premises within two hours and ordered to hand over his car keys.

This rankles still. ‘I said, “don’t you want me to sort out the files?”. But I was told “you don’t think I’m going to let you stay here and steal all my clients!”.

‘I just thought – how little you know me. As a matter of pride and honour, I would have made sure every one of those files was up to to date, with a note for whoever was taking it over.’

So it was that in December 1986 Egan struck out on his own, establishing the firm that bears his name still. ‘Fifty quid for a year’s insurance then,’ he remembers.

Not that it started out thus: ‘At first I worked from home and I actually had a really good lifestyle,’ he remembers. ‘I’d spend the morning prosecuting in Rochdale or Oldham, come back and watch Neighbours while having lunch, and then go and pick up my daughter. It was three months before my wife decided I needed an office.’

‘I’m pretty sure I was the first firm in Bolton to have a logo,’ he adds. ‘I had a palm tree and a setting sun. I’d read a book on marketing which said you have to distinguish yourself from others. In those days there were no logos – it was all black embossed paper. The really prestigious firms had a bit of gold in there too. I think we’ve redesigned it three times since [the palm tree has gone]. I used to get letters from people wondering why they’d been contacted by a travel agent!’

Over the last couple of years, Egan says he has pretty much ‘stepped out of the firm’. Karen Hall, who started as an office junior, is now managing director of the limited company and has succeeded Egan as the compliance officer for legal practice. ‘My wife is very hands-on,’ he adds. ‘One of the ironies is the firm made more profit last year than for a long time!’

Egan became involved in representative activities early. He was president of the local articled clerks society, making common cause with kindred spirits who followed Bolton Wanderers at the former Burnden Park ground. He still has a season ticket at Bolton, but also fetches up at the Etihad to watch Manchester City because he misses Premier League football.

He did not join the Law Society’s Council until his mid-50s, succeeding 2004 president Edward Nally in the same regional seat. ‘You don’t think you have a chance of becoming president when you first get on Council, but after a couple of years I started to wonder,’ he says.

Access to the profession will be one priority during his year’s tenure, reflecting the fact that Egan comes from a less advantaged background than many previous incumbents. His father was a coal miner (who died at 58 of bronchial asthma) and his mother a cleaner.

I ask if his background has ever inhibited him in professional life. ‘When I first started it did, because you meet a lot of super-confident people, in particular barristers,’ he replies. ‘I’ve got a whole host of war stories. Because the other side are so confident you’re not quite sure but you go back and look it up and it dawns: “That’s just not right.”

‘Experience makes you more assured,’ he adds. ‘But even now you might meet someone from a public school background with a very posh voice and loads of confidence, and you are constantly reminding yourself you have been tested under fire and know how bright you are. I don’t worry about not having the intellect to deal with all sorts of people – including government ministers.’

As president, then, how interventionist will Egan be? To what extent is he going to run Chancery Lane?

He will not be a micro-manager, that much is certain, having eschewed the traditional ‘year plan’ prepared by the secretariat for the senior office-holder. ‘Why do I need a year plan? If the organisation is going in the right direction why would you not, first of all, take care to ensure it is working properly?

I’d spend the morning prosecuting in Rochdale or Oldham, come back and watch Neighbours while having lunch, and then go and pick up my daughter. It was three months before my wife decided I needed an office

‘However, it strikes me that what we have here is an organisation that has been a regulator for 200 years and all its energies and resources have gone into that. Eleven years ago now we put regulation at arm’s length, but it seems to me that not a lot changed because we are still trying to deal with the [Solicitors Regulation Authority] and what oversight should look like.’

He adds: ‘We are not delivering all the services members want. I went to Brazil a couple of weeks ago and visited their equivalent of the Law Society, which is entirely independent and voluntary. They have just set up a mediation centre; they have a fantastic audiovisual facility for doing webinars; they’ve got a department that combs legal reports and emails members if they are mentioned. They are offering the kind of services that we ought to be offering.

‘I don’t blame any members of staff here, but what you see is a culture where people write papers and all the emphasis is on getting the paper right rather than, back of an envelope, let’s make it work.

‘To some extent this is changing and I think it needs a push.’

He concurs with a plea from a former chair of the Society’s membership board, Keith Etherington (now a district judge): ‘What should happen is that we should say “we want to do these 20 things”, and you should say “there’s only this much money, you are going to have to decide which 10 you can’t do”. But that doesn’t happen. It isn’t run like that.’

I observe that, so far, Paul Tennant has given every impression of wanting to run Chancery Lane exactly like that. Tennant, who became interim chief executive when Catherine Dixon quit at the turn of the year over the pace of the Society’s governance reforms, recently had his contract extended.

‘That’s one of the reasons we like him,’ Egan smiles.