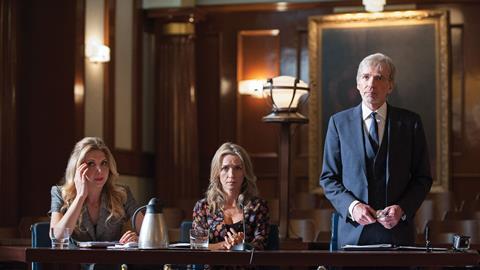 Billy Bob Thornton has a charismatic screen presence, as anyone who saw his portrayal of the homicidal drifter Lorne Malvo in the first series of Fargo will surely attest. The sadistic relish with which Malvo plays a bewildered Martin Freeman like a fish on a hook is a black comic turn of rare accomplishment.

In Goliath, however, Billy McBride is the good guy with the suitably colourful backstory. Ousted founder of legal behemoth Cooperman McBride, whose offices are peopled almost exclusively by avaricious sociopaths, he is first encountered eking out a marginal existence as a part-time attorney whose office is his Santa Monica hotel room.

When not thus occupied, he is to be found in the local speakeasy, downing Bourbon by the quart and polishing off the crossword in double-quick time. Ally McBeal this ain’t.

Washed-up Billy’s salvation – of sorts – is being tasked with prosecuting a wrongful death lawsuit involving the mysterious demise of a weapons research scientist blown to bits on his boat. Was it really suicide?

As we all know he will, the slightly shambolic but pin-sharp Billy quickly gets into deep waters, literally and metaphorically. The weapons research company in question is Cooperman’s biggest client, and the firm’s co-founder is his arch-enemy.

In an enjoyably outré touch, William Hurt’s Cooperman is a malevolent lizard who sits in the half-light on the top floor of the firm’s skyscraper office, surrounded by heavy antiques and listening to sepulchral music. The associates have never seen him and when one of them does – well, she is rendered speechless for reasons I won’t divulge here.

The series is also notable for the weapons company’s potty-mouthed general counsel – in-house lawyers rarely get decent billing in legal dramas, do they? Is Cooperman working for the GC, or is it the other way round?

If you’re not an Amazon subscriber, get the boxset.