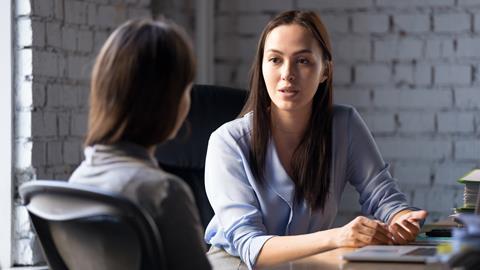 Dr Jones (not his real name) was under investigation by his hospital when he came to see me. He had performed an invasive procedure on the wrong limb, causing the patient harm. ‘The whole process has been so terrible. I want to kill myself,’ he said.

Another client had suffered complications from an operation and wanted to know if he had a case in negligence against the NHS trust. He had anger management problems. When I told him that the prospects of success were slim, his face turned a reddish colour. He became so angry that I feared for my safety.

In another consultation, a client had become tetraplegic in a car accident. Aside from devastating physical injuries, he suffered from clinical depression. We had to explain that medical experts deemed his life expectancy reduced by 10 years. We also had to discuss the nursing care he would need once his wife, who was caring for him but suffered from a terminal illness, passed away. These are challenging conversations.

As personal injury lawyers, we are faced with clients with life-changing injuries. On my first day as a pupil (a first-year barrister), I was handed a file by my pupil master and asked to draft particulars of claim. I knew nothing about the case and opened the file randomly in the middle. I landed on a full-sized colour photo of a severed foot lying on a road. The client, who had been riding on a motorcycle, had been struck by a reversing car on the ankle.  The impact was so violent that it amputated her foot.

We have clients who suffer from such chronic and debilitating pain that they lose their job, partner, and friends. We have others so disabled they require 24-hour nursing care for life. We have parents in ‘nervous shock’ claims who have seen their children die in dreadful circumstances. In one memorable consultation, the father showed me a video of his son – who was the same age as my own – on the morning of his death by sepsis. He was playing with toys in the living room, like any other child. So quick was the progression of the disease that he died hours later.

Clients and their relatives, who often act as their carers, may be emotionally and psychologically fragile. Many have mental health problems. The litigation is itself stressful. In the conference room, the anguish may be palpable. As with Dr Jones, the client might even express a desire to end their life. What we say, and don’t say, can impact on their mental health.

While we are trained in the law, we have no training in mental health. It is easy to ignore mental health issues in our work by telling ourselves ‘I’m just a lawyer’.

Following a recommendation by a psychiatrist, I enrolled on the two-day Mental Health First Aid course run by MHFA England, an established training provider. It cost £300.

The course was led by a former NHS mental health nurse. There were 14 delegates, mostly teachers and staff from human resources. ‘We’ve never had a barrister before,’ noted the instructor.

Through presentations, group exercises, videos and role-plays we learned about conditions such as depression, anxiety disorders, personality disorders, eating disorders, self-harming behaviour and psychosis. For each, we had a first aid action plan centred around an acronym: ALGEE.

Assess and assist with any crisis

Give support and information

Encourage the person to get appropriate help

Encourage other forms of support

Unsurprisingly, the course had a practical focus. I will now sit close to the exit if meeting a client who might turn violent. This tip, along with de-escalation techniques taught on the course, would have helped with my client with anger problems.

I now feel more confident with clients and relatives who display psychiatric symptoms. I have a better understanding of what to say and not to say in those situations. I will introduce delicate subjects, such as life expectancy, in a more sensitive manner. I will no longer conveniently ignore ‘awkward’ comments, including remarks about suicide.

As lawyers, we should deal with clients and relatives in a way that is humane and compassionate. So common is mental illness in society and in our injured clients that the well-rounded lawyer should consider brief training in mental health first aid. Without it, we may inadvertently lack sensitivity, damage trust in the client-lawyer relationship and even cause harm.

Armed with lessons from the course, we can also help friends and colleagues struggling with mental health problems and enjoy a deeper understanding of what affects our own psychological health.

Daniel Sokol PhD is a barrister, mediator and medical ethicist at 12 King’s Bench Walk. He specialises in clinical negligence and personal injury