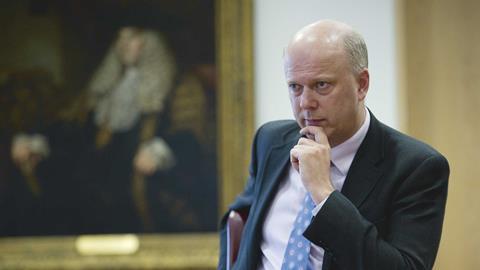 In the absence of a ‘stunning alternative’, price-competitive tendering for criminal defence services will go ahead, justice secretary Chris Grayling tells Catherine Baksi

In his foreword to the consultation on ‘transforming’ legal aid, justice secretary Chris Grayling explains that change is needed to ‘boost public confidence’ and cut costs, which he claims have ‘spiralled out of control’. Speaking to the Gazette, he offers no empirical evidence that the public has lost confidence in the system. But he claims to have received ‘lots of letters and emails’ from people concerned about legal aid entitlement. He alludes to prisoners getting legal aid ‘to argue they should have a different cell’, and migrants receiving civil legal aid.

‘If we have a system that’s providing legal aid to people who the public think should not be getting it, then that undermines the credibility of that system.’

The former BBC producer rejects the suggestion that ministers have undermined public confidence by misleading the media over lawyers’ pay. He is adamant that he would never use the term ‘fat cat lawyer’, but says there is a problem with a small number of lawyers making a large amount of money. ‘If you are deriving your income from publicly funded legal aid it is unrealistic to expect to net an income…. of many hundreds of thousands of pounds a year,’ he says. He hesitates when asked if he thinks criminal legal aid lawyers are overpaid: ‘I think most criminal legal aid lawyers in the junior bar are not particularly well paid. I think that more senior barristers are often quite well paid.’

With solicitors, he says, it depends on the ‘mix of business the firm is doing and how successful the firm is’. He adds: ‘The question we have to ask, actually, is whether the solicitors’ profession is structured to deliver the best value for us and a decent secure living for the people who participate in it.’ His answer would be a resounding ‘no’.

Although the criminal legal aid budget has remained constant, at just over £1bn, Grayling contends that the fall in crime and drop in number of cases going through the courts has not been matched by a ‘commensurate fall in the cost of legal aid’. ‘What we have is becoming more expensive,’ he says. In ‘very tough financial circumstances’, he explains, introducing price-competitive tendering (PCT) ‘is not an ideological choice; it is a financial necessity’.

Perhaps that explains why the proposed scheme, with a maximum starting bid, capped contract volumes and removal of client choice, appears to run contrary to what one might expect of a freemarket Conservative. Grayling must implement the cuts demanded by the Treasury and agreed by his predecessor Kenneth Clarke. That means slashing the criminal legal aid budget by £220m. He is less clear on the baseline figure from which that sum is to be saved. Criminal legal aid, he asserts, currently costs £1.1bn – a higher figure than the £941m in the Legal Aid Agency’s 2013/14 business plan. Grayling is unsure what accounts for the difference, but undertakes to find out.

A Ministry of Justice spokeswoman later explains the discrepancy – £1.1bn is the most recent audited figure on the amount spent on criminal legal aid in 2011/12. She stresses that the figure in the LAA business plan reflects the amount ‘allocated’ for 2013/14, which may change depending on demand. But Grayling wants to do more than make the requisite savings. He wants the industry to ‘re-engineer itself’ so it operates more cheaply and more effectively. ‘It would have been very easy for us to have just said we’ll cut everybody’s fees by 17.5% – it would’ve been quicker and more straightforward…we wouldn’t have to go through the complication of a competitive tendering process,’ he says.

‘It’s precisely because I recognise that there’s a lot of people who are not earning a lot of money, and a lot of little firms that are struggling – that we need to change the way this sector works.’ The only way to do this and retain a ‘sensible structured industry’ he adds, is to undergo a process of ‘supported re-engineering’. That means contracting with a smaller number of larger organisations which, by sharing back-office functions, deploying staff effectively and cutting costs elsewhere, will operate more efficiently. He notes: ‘The commercial sector in this country has spent the last generation constantly working to change processes to bring down costs. I don’t think we can afford the legal services sector to be any different.

‘There’s lots of experience out there of delivering a comparable or better service for less money and that’s the challenge we are throwing down to the legal world.’ Grayling does not want the market to become the ‘preserve of a very small number of very big organisations’. That’s neither the intent ‘nor will we allow it to happen’. He adds: ‘We’re talking about 400 firms [down from 1,600] across the country, which is a network of medium-sized businesses’.

He dismisses concerns that large companies with other MoJ contracts, such as Serco and G4S, will get contracts as ‘scare stories’ circulated by opponents of the reforms. He would not be drawn on a potential conflict of interest if such companies won contracts, making them both the defenders and potential jailers of those they represent. Grayling points out that PCT, originally mooted by Labour, was developed and discussed ‘a long time before I came along’. The current plans ‘look like the best option’. He cannot point to jurisdictions where such schemes work successfully, however, as the MoJ has ‘not really sought to look at other countries’.

Grayling insists quality will be ‘absolutely essential’, stressing: ‘Price is not going to be the deciding factor in all circumstances.’ Firms will be given ‘an envelope to bid within’ if they can show they can deliver a quality service. Then, if I’ve got two bidders who are going to deliver a quality service, I’ll look at who’s got the best price. I’m not prepared to accept bids on the lowest possible price regardless of the litigation support and advocacy available.’

How will he assess and ensure the quality of bidders? ‘I have invited both the Bar Council and Law Society to work together to provide a quality assessment for me. If they’re not able to do that, we’ll use [a] peer review process.’ In health and education, of course, offering greater choice is core to the government’s public services agenda, with moves to enshrine this in law. Not so criminal justice. Defending the removal of client choice, hitherto regarded as a driver of quality, Grayling says: ‘I don’t believe that most people who find themselves in our criminal justice system are great connoisseurs of legal skills. We know the people in our prisons and who come into our courts often come from the most difficult and challenged backgrounds.’

Scrapping client choice is needed to guarantee reasonable volumes of work for contract-holders and is preferable to a ‘free-for-all’, where firms ‘fight to take stuff off each other’ and ‘battle for market share between them’. He rejects the assertion that paying the same fee for a trial or a guilty plea in the magistrates’ court could create a perverse incentive for providers to encourage clients to plead guilty. ‘The professional standards in our legal industry would prevent that from happening,’ he says.

Flattening fees, he suggests, will benefit less experienced lawyers at the bottom end of the income scale. ‘We have done careful analysis of the case mix that the more junior lawyers have. This looks like the best way of ensuring they are protected financially, because they are the ones who will tend to do the simple guilty pleas.’ Grayling is also keen to have a mechanism that does not reward late guilty pleas, but insists it is not intended to punish defence lawyers.

What research has the MoJ done to determine the cost of delivering criminal legal aid services? Grayling says there has been ‘lots of analysis’ but insists ‘there is no single model or structure’, as the cost varies depending on the type of firm. For that reason he rejects the suggestion that the Public Defender Service, which costs considerably more than the service provided by private practice firms, could give an indication.

‘We have looked at the nature of the industry, but there is no single answer to how much it costs to provide a criminal defence service. What we do know is that the only way we are going to deliver a system that is more cost-effective is to have a system that changes,’ he says.The consultation represents the MoJ’s ‘clear direction of travel’, Grayling adds, but he is at pains to point out that the consultation process is ‘genuine’. ‘If anybody doesn’t believe that I’m prepared to change [these] proposals, they should look at what we’ve just done on rehabilitation reform,’ where funding mechanisms and the geographic contract areas were changed.

But, he adds, ‘unless somebody’s got a stunning alternative to PCT’, it will go ahead in some form. The fiscal imperative remains and ‘not saving the money is not an option’. Grayling acknowledges opposition to the proposals, saying ‘there are clearly people in the legal profession who are very unhappy’. But he insists not everybody in the legal profession shares that view. ‘We’ve had plenty of conversations with people who intend to bid for the contracts and who are thinking about how to re-engineer their businesses.’

What contingency plan is there if too few firms bid? Grayling replies: ‘They will bid. I have no doubt whatever. There’s a lot of noise at the moment, but the smart people in the industry are already working on their plans for this, thinking through their business models. That’s what’s to be encouraged and supported.

‘I am completely confident at the end of all this we will have a perfectly successful criminal legal aid industry, both on the solicitors’ side and the barristers’ side.’