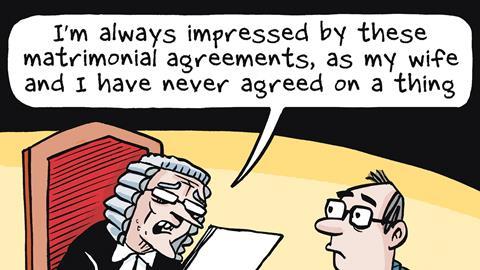 The case concerned the approval by the court of an order reached between the parties, by consent, following arbitration conducted by the Institute of Family Law Arbitrators (IFLA). There was no specific or general issue about the approval of that order in particular, either between the parties or from the court’s point of view. ‘Consent’ orders generally arise from an agreement reached between the parties by some method – mediation, arbitration, collaborative law, solicitor negotiations, direct negotiations. All such orders must be accompanied by a statement of information.

The judge is required to consider the proposed order in the light of section 25 of the Matrimonial Causes Act 1973 and the statement of information filed and in prescribed form (Family Procedure Rule 9.26 (1)(b)). The court has an active role in the approval process. Over the years, the role has been described variously as ‘paternal’, ‘a broad appraisal’ but not a major forensic exercise. In S v S (at paragraph 20), the president repeated his words (uttered as Mr Justice Munby) in L v L [2006] EWHC 956 (Fam), [2008] 1 FLR 26: ‘The judge is not a rubber stamp. He is entitled but is not obliged to play the detective. He is a watchdog, but he is not a bloodhound or a ferret.’

What was noteworthy about S v S is twofold:

Behind both these is the solid foundation of case law going back to Edgar v Edgar [1980] EWCA Civ 2, [1980] 1 WLR 1410, [1980] 2 FLR 19, and in particular the judgment of Lord Justice Ormrod: ‘To decide what weight should be given, in order to reach a just result, to a prior agreement not to claim a lump sum, regard must be had to the conduct of both parties, leading up to the prior agreement, and to their subsequent conduct in consequence of it.

‘It is not necessary in this connection to think in formal legal terms, such as misrepresentation or estoppels; all the circumstances as they affect each of two human beings must be considered in the complex relationship of marriage. So, the circumstances surrounding the making of the agreement are relevant. Undue pressure on one side, exploitation of a dominant position to secure an unreasonable advantage, inadequate knowledge, possibly bad legal advice, an important change of circumstances, unforeseen or overlooked at the time of making the agreement, are all relevant to the question of justice between the parties.

‘Important too is the general proposition that formal agreements, properly and fairly arrived at with competent legal advice, should not be displaced unless there are good and substantial grounds for concluding that an injustice will be done by holding the parties to the terms of their agreement. There may well be other considerations which affect the justice of this case; the above list is not intended to be an exclusive catalogue.’

As the president remarked, in the context of the IFLA or similar process, these basics will very likely be in place (paragraph 20): ‘It can only be in the rarest of cases that it will be appropriate for the judge to do other than approve the order. With a process as sophisticated as that embodied in the IFLA scheme it is difficult to contemplate such a case.’

What of the wider position? The process by which the agreement was reached is important. The judge must ensure, for example, the absence of anything such as a discriminatory approach in the process which might lead to unfairness. In AI v MT [2013] EWHC 100 (Fam) a complex order, encompassing children and financial issues, obtained through a Beth Din mediation process, was, after due enquiry, given approval.

What if one party now wishes to resile? If the process is proper and the basics are in place then it will become increasingly difficult. At paragraph 9 of S v S, the president retreated from his previous, more conservative language of 2002 – that a court would need ‘good and substantial grounds for concluding that an injustice would be done by holding the parties to it’. He now preferred the stronger words of Thorpe J (as he then was) from 1994 – there would have to be ‘the most exceptional circumstances’ and ‘overwhelmingly strong considerations’ for not holding a party to a properly reached agreement.

By extension, at paragraph 14, the president approved case law which encouraged the use of the ‘notice to show cause’ process on the part of the side seeking to turn the agreement into an order, as well as encouraging the use of robust case management even where there is some ‘cause’ shown.

Nonetheless, never overlook that the court always has discretion to approve or not, and that decided cases are neither less nor more than guidance on what is at the beginning, middle and end of this process – section 25 of the Matrimonial Causes Act 1973 itself.