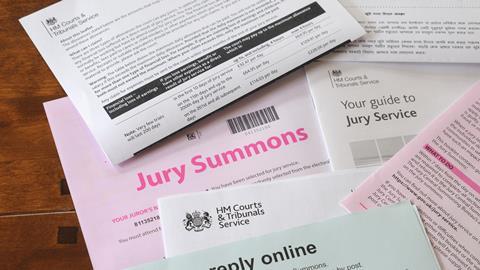 Are jury rooms safe? I'm about to find out...

Sometime in the hazy period between Christmas and New Year, a letter from HM Courts & Tribunals Service landed on my doormat. After a moment of panic, in which everyone who might feasibly want to sue me flashed before my eyes, I opened the envelope. I wasn’t being dragged through the courts. I was simply being summoned for jury service.

With several days of mince pies and sherry still to get through, I put the letter in my desk drawer and forget about it. As January set in, however, and lockdown ramped up, the prospect of boarding the Northern Line and spending my days in a London Crown court grew more unsettling.

As a healthy 24-year-old living with a fellow 24-year-old, I’m prepared – if not eager – to take my chances. However, the summons gave virtually no information for those who aren’t, either for their own sake or for someone they live with.

The first letter gave no indication of whether age, underlying health conditions, or other Covid risk factors would justify a deferral or excusal. In keeping with HMCTS’s usual, bullishly optimistic approach, it simply insisted that court safety measures will ‘ensure the safety of anyone coming to our buildings’.

The next letter was even less reassuring. ‘My guide to jury service’ made no mention of coronavirus at all. It did, however, warn me that I could be fined £1,000 for failing to show up at court.

I wonder whether I am more cynical than the general populace given my role as a legal reporter. Every day I hear reports from lawyers of unsanitary court conditions, rebutting HMCTS’s claims that transmission in courts is ‘very rare’. However, the lack of information for members of the public who are unfamiliar with the court system could well be more frightening.

Asked whether the government plans to limit eligibility for jury service during the pandemic, Chris Philp MP said the court service has issued guidance to help staff ‘deal sympathetically’ with all requests from the public who wish to be deferred or excused from jury service as a result of Covid-19.

This message needs to be conveyed more clearly to future jurors, who are currently presented with stern government warnings and threatened with hefty fines. Now is not the time to drag people to court against their will.