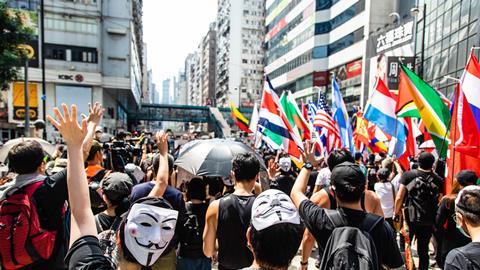 Alan Hoo QC is one of the loudest pro-Beijing voices in the Hong Kong legal community and, on a trip to London last week, he was determined to make his message heard.

After speaking to the Foreign Office and Chatham House, Hoo planned to hold a media briefing on Hong Kong’s protest problem in a wood-panelled room in Middle Temple. Shortly before the meeting was due to take place, however, there was a change of venue.

The relocation was for the convenience of Hoo's programme, according to the public relations manager. However, when I’m introduced to Hoo in a £500-a-night hotel in Leicester Square, complete with disco balls and pulsing music, it seems appropriate to be meeting beyond the bounds of legal London.

Hoo is chairman of Hong Kong’s Basic Law Institute and a zealous advocate for the governments of Hong Kong and China. With great animation, he explains that pro-democracy demonstrations which started in June are ‘devastating the Hong Kong economy and the daily lives of the people’.

The protesters are ‘promoting a culture of hate rather than discussion’ he declares. ‘They are spoiling for a crackdown. They want the People’s Liberation Army to come out.’

Hoo’s visit to the UK coincided with preparations for Hong Kong’s Arbitration Week which, according to organisers, will take place as planned from 20 to 25 October and will be just as well attended as usual. The LAWASIA conference, hosted by Hong Kong, is also due to take place in early November.

Hoo’s timing is no coincidence. Aware that Hong Kong will be under great scrutiny from the legal world in the coming weeks, he is set on quashing criticism of the government. Hong Kong is being misrepresented by a biased media, he argues, and it is protesters – not leaders – who deserve condemnation.

A similar message was spread at a breakfast hosted by the Law Society of Hong Kong and the Hong Kong Bar Association last month at the International Bar Association’s annual conference in Seoul.

For the Hong Kong Law Society, Melissa Pang JP emphasized the need to protect the judiciary from what she called ‘unfounded criticism’ over the treatment of arrested demonstrators. Meanwhile, Philip J Dykes of the Hong Kong Bar Association said that ‘reports of the death of one country-two systems have been exaggerated’.

Breakfasting guests were also handed government leaflets stating: ‘Despite recent disruptions, the fundamentals and institutional underpinning of our economy and society are strong…We will no doubt bounce back. We always do.’

The line from pro-government legal forces is clear: Hong Kong is open for business as usual. However, with violence in the region starting to escalate and Carrie Lam refusing to rule out help from the Chinese government, business has rarely seemed less usual.