Culture wars and the law

America is roiled at the moment by culture wars. We have a different history and approach. But some of those same fights are played out here in a more minor key. It is instructive to see how the bar and the law approach those struggles in the US, to see whether we have anything to learn.

The most important development in this area of recent days was the announcement by the American Bar Association (ABA) that it has established a new legal fact check website ‘to help the public find dependable answers to swirling and sometimes confusing legal questions’. It is one of several initiatives launched by the new ABA President.

The new website has begun with postings on recent US controversies such as the legality of burning the US flag, the limits of hate speech, the ability of US universities to admit students through affirmative action programmes, and the power of the President to issue pardons.

Maybe the closest analogy here has been the Law Society’s recent publication on the Court of Justice of the European Union, seeking to explain the Court in the light of the current public debate over its post-Brexit role. The difference is that the ABA now concentrates all of its legal fact checks in one website, and maybe the Law Society should consider doing the same.

The continuing row over the removal of monuments to Civil War heroes on the Southern side has given rise to a loud debate – and notorious violence - on the role of monuments in general in the USA. Roger Taney was a justice of the Supreme Court who wrote the majority opinion in Dred Scott v. Sandford, the 1857 Supreme Court decision that held that African slaves or anyone descended from African slaves could never be United States citizens. He did not join the Confederacy, and was Chief Justice for 28 years, including under Abraham Lincoln. The Dred Scott decision is and was seen as one of the contributing factors leading to the Civil War. Two of Roger Taney’s statues were removed in recent days in Maryland, one in Baltimore and the other in Annapolis under cover of darkness, 160 years after the decision.

We have had our own controversies over statues, most recently concerning that of Cecil John Rhodes in Oxford. If Lord Neuberger ever merits his own statue, will spiritual descendants of Remainers protest in 150 years’ time at its removal by descendants of Brexiteers for having been an enemy of the people? 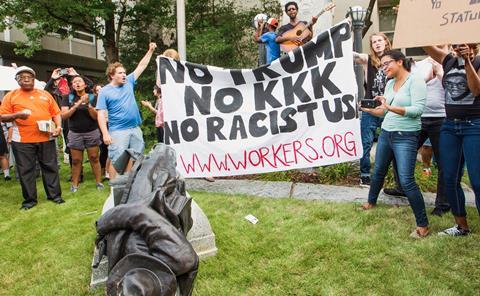 That is not the only legal trouble caused by the monuments dispute. The American Civil Liberties Union (ACLU), usually seen as a champion of minorities, and of causes supported by the left in general, has found itself on the horns of a dilemma: to what extent should it support the right of free speech of those who might be thought of as members of hate-based groups? The organisation went to court recently to fight for the right of white nationalists to hold the notorious rally at Emancipation Park in Charlottesville, which led to the violent aftermath.

ACLU has seen a rise in its status since the election of President Trump. Membership has almost quadrupled, and donations have multiplied about sixteen times. Now ACLU is being severely criticised by those same people who have recently supported it. It is a complex conundrum for them.

Finally, a judge has also become embroiled in the controversy. A part-time magistrate judge in Georgia resigned after he wrote Facebook posts attacking the anti-statue protesters as snowflakes, and saying that ‘The nut cases tearing down Confederate monuments are equivalent to ISIS destroying history’. The chief magistrate judge had first suspended him due to the need for judges to conduct themselves in a way that promotes public confidence in the judiciary.

The magistrate judge concerned commented that he didn’t see anything controversial in his views. And that is the nub of the issue. There are two sides to the culture wars, and, even when they understand each other’s point of view, they don’t seem able to accept its validity.

For instance, over the statues, maybe some will argue that Roger Taney’s statue should be left alone. He was not a Confederate, he signed up to the majority opinion in the Amistad judgement which found in favour of slaves - and he freed the slaves he inherited from his family. You will find similar arguments about Robert E. Lee.

Similarly, as mentioned, people cannot accept that ACLU should also fight for minorities with whose rights they personally disagree, even if lawful.

That is why the ABA’s legal fact check website may be a useful contribution. To the extent that our own Brexit wars display similar characteristics, we should think about a similar solution.