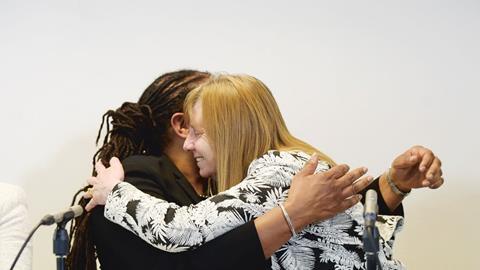 Hillsborough: justice the only victor

By taking 27 years to get to the right result, our legal system has been shamed by Hillsborough. But there is consolation in the commitment, professionalism and sheer indefatigability of some of its practitioners.

If a picture can speak a thousand words, this one does just that. The woman catching her solicitor apparently unawares with a hug is Margaret Aspinall, who lost her eldest son James on 15 April 1989.

James, 18, left his mother that morning with a cheery promise not to be home late. Margaret was later confronted by the sight of her son’s body on a trolley – and was prevented from touching him ‘because he doesn’t belong to you anymore, he belongs to the coroner’.

The tributes paid by lawyers acting for the Hillsborough families could hardly have been overstated in the face of what Margaret Aspinall and so many others have had to endure and overcome since the original inquests of 1990.

But we can say here that Marcia Willis-Stewart, Elkan Abrahamson and many other solicitors and barristers are due a few plaudits of their own.

As Margaret Aspinall said last week, there is no ‘victory’ to celebrate; but we now have a degree of closure over one of the greatest miscarriages of justice of our times. The families and their lawyers deserve the grateful thanks of everyone who believes we are – or should be – equal before the law.