We should wait and see what the new lord chancellor does before opining on whether she is up to the job.

The swearing-in of a new lord chancellor is always a magnificent spectacle.

When Liz Truss took the oath before the lord chief justice and his most senior colleagues last month, the ceremony was filmed for the first time. But the recording, available on the Gazette website, does not show the other senior judges who crowded into every available space on the bench. They were there to show respect, of course, but also to find out what sort of person Theresa May had chosen for the job.

Truss got off to a good start by saying she was a ‘great supporter of reform and modernisation throughout the courts and tribunals system’. That, she acknowledged, was an ‘urgent task’ that would be high on her agenda in the months ahead – as she knew it was for senior members the judiciary.

Within a week of her appointment, then, the new lord chancellor had understood that reforming courtroom procedures, rewriting rule books and creating paperless courts were the biggest challenges facing the courts. Chris Grayling, her first non-lawyer predecessor, had signed off an investment of more than £700m in new technology, partly offset by selling off redundant court buildings. The courts modernisation programme is expected to produce huge savings and the judges were relieved to hear that Truss had given it her blessing.

Two days earlier, she had received a less-than-generous welcome from another of her predecessors, the Labour backbench peer Lord Falconer. ‘The most amenable lord chancellor that a prime minister could find,’ he wrote, ‘would be one who looks to her for promotion: an ambitious middle-ranking cabinet minister whose main ambition is to go further up the greasy pole, with no known signs of independence.’ In Falconer’s view, Truss fitted the bill perfectly.

What had he got against her? It was not misogyny, he insisted in a subsequent newspaper article: he had criticised Grayling in 2014 and he would have been happy with the barrister Anna Soubry. It was simply that there was nothing in Truss’s background to suggest she was suitable for the job. 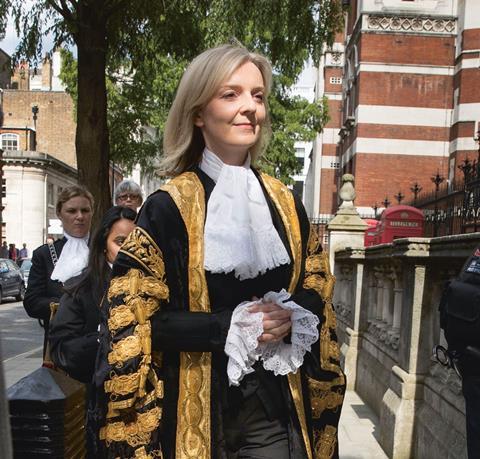 Until little more than a decade ago, there were no formal requirements for the post of lord chancellor. The holder was expected to be a lawyer and was given a peerage if he (or, potentially, she) did not have one already. But Falconer had opposed adding those qualifications to the statutory job specification. Instead, as lord chancellor, he forced through legislation allowing the job to go to anyone who ‘appears to the prime minister to be qualified by experience’. And although a candidate’s experience as an MP or minister can be taken into account, the prime minister may also take account of other experience that she considers relevant. That seems broad enough to include everyone apart from a school-leaver.

Yet Falconer argues that service as a government minister – even membership of the cabinet before the age of 40 – is not enough. He concedes that any court would give May very wide leeway in deciding whether Truss was qualified by experience. So the best he can say is that Truss’s appointment would have been ‘flawed’ unless the prime minister had been aware of the statutory requirement before choosing her lord chancellor. This is pretty thin stuff. If Falconer had not wanted the job of lord chancellor to go to someone like Truss, he should have asked parliament to say so.

I prefer to judge Truss by what she does in future. Lord Thomas of Cwmgiedd, sitting alongside the new lord chancellor, spoke of her ‘wide experience’. The lord chief justice reminded her that the two of them had a shared constitutional responsibility – and not just ‘to provide the wherewithal through which the judges can secure access to justice for all’. Thomas cannot discipline errant judges without her agreement. Last week, for example, it was announced that the two of them had removed Francis Evans QC from his position as a recorder because of his personal behaviour.

Much more sensitive will be the case of Mr Justice Peter Smith, which I wrote about. Though all such cases are dealt with behind closed doors, I understand that a disciplinary panel sat recently. In due course, Truss and Thomas will have to consider the panel’s conclusions.

If they include a finding of misconduct, Smith will be expected to resign. If he does not, Truss should invite parliament to dismiss him. If she allows him to continue drawing his judicial salary for any longer than necessary, she will have to explain her reasons to MPs.

Part of me hopes that Smith will hang on and dare Truss to sack him. Then we’ll see what metal she’s made of. And I can’t help admiring a lord chancellor who named one of her daughters Liberty.