According to consumer watchdog Which?, one of the signs of a possibly fraudulent website is that its domain (web address) does not quite match that of its purported owner. ’For example, website domains such as www.ipadoffers.net or www.discountnikeclothes.com should raise alarm bells,’ its scam-spotting advice states. ’You should also be cautious of domains that end in .net or .org.’

This is not great news for the RTA claims portal, Official Injury Claim, which went live this week. While proudly displaying the Royal Coat of Arms over the introduction ‘We work for the Ministry of Justice’, the site’s URL does not end in '.gov.uk' but with a humble '.org.uk', which is available to any online Tom, Dick or Harry for about £9.99 a year.

It gets worse. Anyone looking up the domain profile before entering highly sensitive details about a road accident claim will learn that the site appears to be hosted in Ashburn, Virginia, and the registration is due to expire next month. Suspicions aroused, they might check the site for another warning sign, grammatical mistakes. Sure enough, here it is asking for the registration number of the vehicle you were in 'or it’s make, model and colour'. 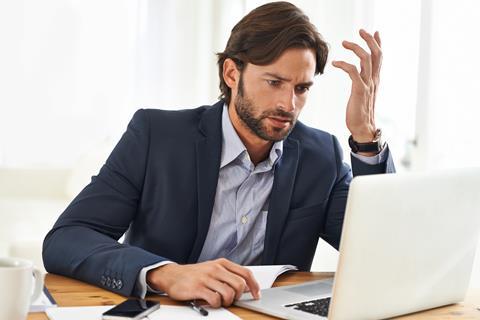 Perhaps it is unfair to add to the kicking the RTA portal has had from Gazette readers over the past few days. The choice of domain name was constrained by official policy - access to 'gov.uk' is jealously guarded by the Cabinet Office and is (rightly) not available to third party operators. As for the stray apostrophe, all an online journalist can say is 'there but for the grace of god...'.

But there is a wider issue here. According to the master of the rolls, the portal is destined to be one of the many front-ends to his vision of an all-purpose online dispute resolution service, funneling claims through a series of resolution procedures until only the most serious end up in the physical courts. In his important speech last month to London International Disputes Week, Sir Geoffrey Vos suggested that the system could bring together 'a range of portals (maybe 30, 40 or even more) all dedicated to resolving usually sectoral disputes without the need for court proceedings.' The government's role would be to regulate what was already out there, rather than building anew.

This is an excellent concept, but it leaves open the question of who does the regulation and - as with the RTA portal - how do do potential parties know they are dealing with an approved channel? Perhaps keen to display his social media credentials, Sir Geoffrey suggested a 'blue tick' scheme, along the lines of that awarded by Twitter to high-profile figures. But again, Quis custodiet?

Before these independently run online portals begin functioning as a virtual online court, they need clear, agreed and enforced standards. This does not necessarily imply bringing them completely under the wing of Whitehall - constitutionally a dodgy position anyway. A good starting point would be a reliable and checkable system of authorised web addresses - the domain .justice.uk appears to be unused, if HM Judiciary wishes to register it. If people are going to trust the online court, it will have to be well fenced off from the web's badlands.