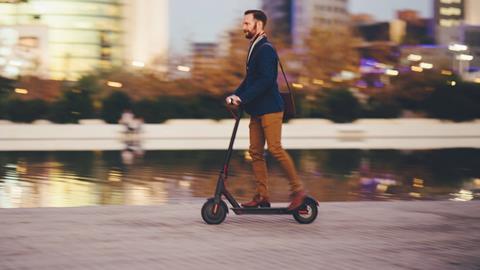 If the thought of a small child barrelling towards you on a scooter is enough to make you panic, imagine a middle-aged man – complete with a beard and briefcase – doing the same. And it’s rush hour. And he’s going at 20mph.

Electric scooters have taken cities by storm. Every morning commuters whizz down cycle lanes on their motorised steeds, and ride-sharing start-ups like Bird and Lime have brought rental scooters to a host of European cities, including Paris, Brussels, Warsaw and Malaga.

The problem is, people aren’t allowed to ride them in the UK.

This isn’t just because they look ridiculous – although frankly it would be reason enough. They make fold-up bikes seem dignified. No, it’s because e-scooters count as ‘personal light electric vehicles’ (PLEVs) which are illegal to ride on either roads or footpaths in the UK.

Using PLEVs on the pavement is banned under the 1835 Highways Act, which prohibits anyone riding a ‘carriage’ on pedestrian walkways. Meanwhile, riding on the road is an offence against the Road Traffic Act 1988 unless you have a driving licence, insurance, helmet, road tax and registration plate. Riders caught using e-scooters in public face a £300 fixed-penalty notice and six points on their driving licence.

Many riders are undeterred, however, cheerfully terrorising pedestrians, cyclists, dogs – even joggers, former king of pavement pests. What’s more, given the current illegality of e-scooters, there is barely any regulation around how to ride them safely.

If PLEVs refuse to go out of fashion, we need to update the law and devise proper regulation on speed limits, age restrictions, training requirements, helmets and parking. Where can scooters go? Who can ride them? And where can people leave them?

Last week, Transport for London urged the Department for Transport to accelerate its regulatory review so that safeguards can be implemented. The government needs to put its skates on – or invest in a motorised scooter, perhaps.