The UK response to the coronavirus pandemic had not been escalated when Shami Chakrabarti and I met for the interview published in this week’s Gazette. She suggests a right hand raised to her left shoulder is an okay hands-off greeting, which we do before walking round the corner to the room lent to the Gazette by a friendly chambers.

Chakrabarti is a good conversationalist, switching easily between chit-chat, humour and concerned advocacy. She’s also generous with her time, with the result that there is a certain amount left out of the resulting article. A few points seem worth adding here.

She is especially exercised by the case of the British teenager convicted in Cyprus of making false allegations when she withdrew, apparently under some pressure from the police, allegations of rape against 12 Israeli men.

It is an instance, she argues, of the European Convention on Human Rights not being applied in a country that is ‘bound by the ECHR, which of course gives victims rights as well as defendants’.

As the Gazette reported, Chakrabarti believes rape complainants need support, including legal advice. While some online readers scoffed that complainants are not suspects, the Cyprus case underlines the ways in which a rape complainant may need advice on their position. The decision to drop allegations had criminal legal consequences for the complainant. 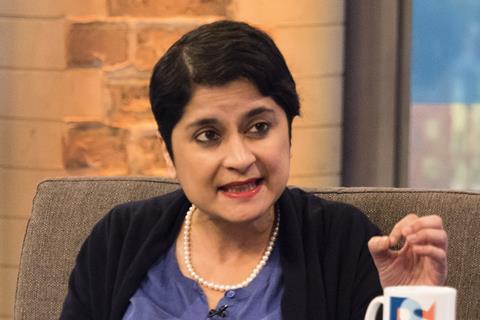 ‘It is significant,’ she adds, ‘that the complainant is a British national and doesn’t seem to have had, in my view, adequate consular support during this ordeal.

The handling of the case also highlighted ‘ingrained attitudes to women’. In that she identifies a problem with the prime minister. He has, she notes, no ‘attitude leadership’ in this area: ‘I am concerned about the current prime minister’s attitudes to women, and public attitudes to his comments and behaviours in the past. I think he did send a bad signal, and I’m thinking about things that he’s written about women in the past, whether it’s single mothers or Muslim women… I think there’s a misogyny in his own discourse.’

In parliament Chakrabarti says she misses the Conservative MPs she had been able to make common cause with on a range of justice issues – first as director of Liberty, then as a parliamentarian. The Lords, to which some have gone, is better than the Commons, she says.

She chooses her words carefully when asked about the task ahead for the Labour party. She admits calls for ‘unity’ are a cliché, but still adds: ‘We need to be better at uniting and focusing on the external existential threat to things we care about, crucially equality, and that is greater equality of wealth and power, but even before any of that, equal treatment under the law.’

When we met, it was ahead of a planned event at the LSE titled ‘The Rape Audit’. Like most other public meetings, it was later cancelled. She would have been chairing a panel that included solicitor Harriet Wistrich, founder of the Centre for Women’s Justice, who in other contexts ‘trans rights’ campaigners have argued should be no-platformed.

As a powerful advocate of civil liberties and human rights, how does Chakrabarti feel about the practice of no-platforming?

The, perhaps expected, caveats run through, she does conclude: ‘Generally-speaking my instinct is usually to have the debate.’

The interview over, we walk out on to New Square where counsel walk in twos, buried deep in conversation, and the magnolia trees in glorious full bloom. I don’t know it, but I’ve just finished my last face-to-face interview for possibly months.