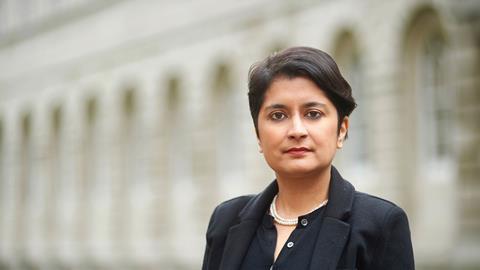 ‘We’re not in Kansas any more.’ That is Shami Chakrabarti’s verdict on December’s general election. She misses Conservatives such as Dominic Grieve, whom she describes as ‘one of the finest attorney generals, probably, of my lifetime. I don’t see equivalent voices in this massive majority of Conservative MPs, and that concerns me’.

From some parliamentarians this could be dismissed as a partisan dig. But over 12 years as director of campaign group Liberty, Chakrabarti impressed with her ability to build effective alliances across party lines – working closely with Conservative MPs such as David Davis and Damian Green to resist what she argued were assaults on civil liberties by post-9/11 Labour governments. If she was a thorn in Tony Blair’s side, she was an effective one – he lost a vote on plans to allow up to 90 days detention without charge for terror suspects. Gordon Brown subsequently abandoned plans for a 42-day detention period. The limit now sits at 28 days.

Chakrabarti accepted a CBE and a role as one of 12 Olympic flag-bearers at the 2012 London games because, she noted, dissent can and should be recognised as a patriotic act. Channel 4 News listed her as one of the ‘top-10’ people who ‘may run Britain’. She has never been far from controversy, but those seem like heady days compared to her time post-Liberty, which she left in 2016. Called on by Jeremy Corbyn to head an early inquiry into antisemitism in the Labour party, a controversy that persists, she was criticised for first joining and then accepting a peerage from the party. She has at times seemed ill at ease trying to hold a corporate political line as a key frontbench spokesperson for a divided Labour party.

Yet in this post-election period, baroness Chakrabarti of Kennington, in the London borough of Lambeth, appears back in her element. Prime minister Boris Johnson’s new government, on current evidence, dislikes the checks on executive power the justice system provides and chafes against the UK’s commitments under the European Convention on Human Rights. In terms of austerity, it is still bleak mid-winter at the Ministry of Justice, and the precipitous drop in rape convictions – at a time of rising reports to the police – is a crisis that must, she argues, be tackled.

The established norm is for the political right to use rhetoric that champions victims of crime, while the liberal left worries about the rights of suspects. The divide has never been that simple, but the alignment breaks down dramatically, notes Chakrabarti, in the area of sex crimes, especially crimes against women. Here austerity has allowed the justice system to reflect society’s prejudices against women.

Chronic underfunding of the justice system, she says, has ‘a particularly acute effect in relation to offences that are hard to prove, that are sensitive to investigate. Rape is a classic example.

‘Getting the right balance’

Responding to criticism of the CPS, Siobhan Blake, chief Crown prosecutor for CPS Mersey Cheshire and CPS rape lead, says: ‘Handing over personal digital devices as part of a police investigation is a daunting prospect. And when coupled with the trauma of being a victim of sexual violence, I understand why the justice process can be a source of anxiety.

‘Getting the right balance between protecting privacy and allowing a thorough investigation is in everyone’s interests to ensure a fair trial. But I want to repeat my reassurance to anybody affected by these horrific crimes: come forward with confidence, report it and – whenever the legal test is met – we will always seek to bring charges no matter how challenging the case.

‘It is important to remember that mobile devices can provide vital evidence such as time lines which can strengthen the prosecution case. However, this isn’t to say they should be automatically requested and examined. Strict rules mean personal data should only be examined if it is a reasonable line of enquiry. If it is not connected to the case, it must not be shared with the defence or shown in court. We are always working to improve our response to these cases and have recently trained all our prosecutors on reasonable lines of enquiry to address issues of disproportionate requests.’

‘The system is on its knees and we all know it is. This is not just me as shadow attorney saying that. It’s judges saying that. It’s police and prosecutors and everybody involved in the system talking about the chronic underfunding over 10 years. That will take its toll, and acutely in relation to sex offences, because when consent is the most common defence it is a difficult offence to prove. All stigma around survivors and a sensitivity around coming forward means that these victims need more support than a victim of burglary or financial crime. So the chronic underfunding of the system presents a particular challenge in this area.’

This is her ‘headline concern’ – that ‘chronic underfunding is creating a terrible strain on the system and it’s our most vulnerable victims of sex offences who are paying the price’. There is, Chakrabarti notes, an issue around discovery in sex offences – not least the ‘digital strip search’ that occurs when complainants give access to their mobile phones and social media accounts.

Last week Gazette interviewees reflected on the seismic shift in the quality of investigations ushered in by the Police and Criminal Evidence Act 1984 (PACE). PACE set out powers, standards and parameters for evidence-gathering and brought the duty solicitor scheme into being. Chakrabarti suggests that just such a change should be brought in to protect and support complainants in rape cases.

‘We rightly have protections for suspects in relation to privacy and self-incrimination,’ she says, ‘so there ought to be some protection for complainants.’ Chakrabarti notes that when a complainant’s mobile phone is handed over, they are asked to sign ‘a very lengthy form’ while in the police station ‘with no access to legal advice’, but with the possibility that ‘incriminating or embarrassing, or just personal material will be seen by others and used in whatever way. In the digital age, complainants need protection in the police station too’.

While the government and CPS ‘flatly deny’ that full access to a complainant’s phone is ‘routine practice’, in reality such access is practically a precondition to progressing an investigation. She has repeatedly made the point in the Lords that in this respect, such practice may be in breach of the ECHR.

‘The only legal justification or legal power that’s being offered,’ Chakrabarti says, ‘is consent. If I say to you, “if you don’t hand over your phone I don’t investigate your case”, how real is that consent?’

Others have made this argument. Former Metropolitan Police commissioner Lord Hogan-Howe has also questioned the ‘relevance’ of evidence presented from such searches. In February the victims’ commissioner for London, Claire Waxman, began a review of the impact on rape victims of police seizures of their phones. In a separate move the Metropolitan Police has said it will pilot a data inspection system designed to limit invasion of privacy.

But there is a further problem in the way the justice system, including judges and juries, ‘read’ evidence that relates to a complainant’s conduct. ‘When people are sitting in judgement over other people’s behaviours, it’s difficult to get them to displace prejudices that have been not just a lifetime in the making but several lifetimes,’ she says. ‘The relevance of how you were dressed, if you went to this place voluntarily, if you were consuming alcohol, if you were consuming all of the things that other people do, will be flipped to judge and prejudge a complainant. It does seem sad and strange to me that we haven’t come further in the 25 years that I’ve been a lawyer.’

The investigation and trial process does not, Chakrabarti thinks, adequately reflect the complexity of a complainant’s behaviour. Contact with an alleged attacker after the incident is one example. Then there is the role that ‘power’ plays in some contexts, a strong theme uncovered by the #MeToo movement and evident in the trial of Harvey Weinstein. She talks about the lack of ‘a settled Highway Code… to describe what inappropriate behaviour between people in the workplace or other social settings is. That line between what some people think is flirting-stroke-banter, stroke-over the line into inappropriate and positively threatening, abusive behaviour.’

Chakrabarti remains a firm supporter of jury trials, but says the lack of such a ‘settled’ view on behaviour ‘is going to create challenges for juries unless we start tackling these issues from school days onwards’.

I’m particularly worried because the oven-ready no-deal Brexit is nearly done. How do you keep feeding the more xenophobic Eurosceptic appetite?

High on Chakrabarti’s list of political concerns is the threat to the Human Rights Act 1998 (HRA) and the ECHR. The HRA, which gives the ECHR expression in UK law, has endured many attacks and outlived the tenure of justice ministers who promised its abolition. But the current political climate concerns Chakrabarti: ‘I’m particularly worried at the moment because the oven-ready no-deal Brexit is nearly done. How do you keep feeding the more xenophobic Eurosceptic appetite?’

She is careful to note the ‘multitude of reasons’ why people voted to leave the EU, many unrelated to xenophobia – it is part of the Conservative pro-Brexit base that concerns her. ‘Once the hard Brexit is achieved, what’s next? An obvious target is the HRA and even the ECHR.’

Threats to the independence of the judiciary and the role of the courts are also real: ‘We’ve got comments by the attorney general about judicial overreach and the need to take back control of our courts. This language is not mine and this is not a conspiracy theory – this is out in the open.’

Suella Braverman’s views, she notes, accord with the prime minister’s. ‘We’ve got the demonstrable and well-publicised irritation of the prime minister with the senior judiciary, beginning with the prorogation case last autumn. Every time they lose a judicial review they seem to be more and more irritated and ready to take on the judges as an independent institution.’

Discussion of senate committee-style hearings before judicial appointments to the Supreme Court represents a threat Chakrabarti says must be taken seriously. ‘This is not Dominic Grieve and Ken Clarke that we’re dealing with now,’ she stresses.

Such talk seems to make perfect, civilised sense where we are sat talking – a lovely book-lined room within Lincoln’s Inn.

But a supposedly enlightened justice policy made little impression on the electorate. What case does Chakrabarti think can be made outside these rarefied confines? What would put justice at the front of people’s minds?

‘We should be investing in the criminal justice system,’ she replies. ‘Not just because the alternative is so disastrous for the rule of law, but because it’s really good social infrastructure. Potentially these are really rewarding careers and jobs for young people coming out of college – to be lawyers and judges and therapists, and all the people that I want to see recruited into the system in greater numbers. So it’s good for those who need to use the system, but also good for those who would be working in it in the future. Some things humans do better than robots, and law is definitely one of those.’