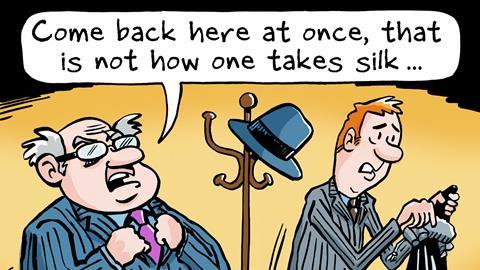 How to: become a QC

Taking silk has real value for solicitor-advocates. But are the cards stacked against them? Katharine Freeland reports.

On 11 January, the Queen approved the appointment of 107 new Queen’s Counsel and eight honorary QCs. The rank is a badge of excellence with global credibility.

‘It is certainly recognised as an important kitemark throughout the world. I have found it a great honour,’ says Michael Caplan QC, criminal litigation partner at Kingsley Napley, who took silk in 2002. Silks can charge higher fees, benefit from instruction on more complex cases and, of course, wear the eponymous silk gown – as well as enjoy the privilege of sitting in front of their junior barrister colleagues in court. In the last 10 years, efforts have been made to diversify the pool of talent but debate continues about whether the right people are being rewarded.

Like Caplan, Jagusch has found that the QC marque matters. He observes: ‘Its value is very significant indeed. For arbitration clients who are more familiar with using silks in the courts, it provides comfort that their advocate has demonstrated the same standard of experience and excellence that is required of barrister silks. It also inspires younger solicitor-advocates in law firms to pursue advocacy in the knowledge that if they consistently excel in cases of complexity then they too may aspire to silk.’

Nine applicants from black, Asian or other ethnic minorities were successful of 32 who applied. Pitcher comments: ‘While I was pleased to note a rise in BAME applicants to 14% of applications, it is disappointing that the success rate was lower than for applicants as a whole.’

The days when the selection of QCs involved secret soundings and a tap on the shoulder are gone. Applicants are considered under a competency framework comprising five key areas: understanding and using the law; written and oral advocacy; working with others; diversity; and integrity. Since the 2005/06 reforms, a selection panel of 10 people – barristers, solicitors, a retired judge and non-lawyers – considers confidential assessments from judges, fellow advocates and professional clients, then invites successful candidates to be interviewed. Those who make QC have to achieve excellence in all five competencies.

Why the lack of diversity?

So far, so clear. But why do so few solicitor-advocates apply? ‘It is a tough process, for sure, but then it ought to be,’ Jagusch says. ‘Having the right cases to demonstrate the required competencies is only part of the challenge. Explaining how you have demonstrated excellence within the very strict word count limitations leads most applicants to slave over their forms for far longer than at first blush might seem necessary.’

It is not cheap either. The applicants’ fees fund the process, starting off with an initial application fee of £1,800, a further appointment fee of £3,000, plus the cost of letters, patents and VAT. Although this does not seem excessive, considering the earnings of most applicants, the Solicitors’ Association of Higher Courts Advocates (SAHCA) has identified this as an issue. William Richmond-Coggan, vice-chair of SAHCA, notes: ‘There is a comparatively higher application cost for employed advocates (and particularly solicitors) against members of the self-employed judiciary.’

Work highlights: Lead counsel to Dubai Ports Authority in defeating claims brought by a property developer seeking more than $2bn in damages for alleged breach of a concession agreement.

Lead counsel to the UAE in defeating International Centre for Settlement of Investment Disputes proceedings brought by an individual claiming to be Italian under a bilateral investment treaty.

Co-chair of the international arbitration practice group and a member of the transnational dispute resolution practice at Gibson, Dunn & Crutcher.

Head of the London-based international arbitration practice and a dispute resolution partner at Freshfields Bruckhaus Deringer.

Work highlights: acting for a subsidiary of Alfa Telecom/Altimo in a multi-jurisdictional dispute over a 25% stake in the Russian telecoms company Megafon.

Acting for an international telecoms operator in arbitration in Nigeria on a high-value shareholder dispute.

Being employed also changes the landscape in which the application is made: ‘One problem, as SAHCA members consistently report, is that this value is not recognised by their employers. In contrast to the bar, where taking silk is a well-trodden career path, very few firms recognise the benefits of having a QC in-house.’ One of the priorities for SAHCA is to establish, with QC Appointments (QCA), a better framework of guidance and support for solicitors making applications. ‘Solicitor-advocates do not have the supportive network of peers and colleagues who have been through the process which is available to most members of the bar,’ Richmond-Coggan observes.

Demonstrating consistent excellence in oral advocacy is tough to prove. It means securing a steady flow of high-value instructions in which the solicitor-advocate can demonstrate their worth – a point when most clients will turn to the bar. Richmond-Coggan adds: ‘We are hoping that initiatives like SAHCA’s Court Advocacy Network will enable our members to obtain more trial advocacy instructions for cases within their competencies, as one part of an overall drive to level the playing field for solicitor-advocates.’ SAHCA is also concerned about perceived barriers to being appointed to coveted places on Treasury panels, which would improve exposure to high-quality work.

There is also a tension with civil procedure rules, which emphasise the need to settle cases early. Caplan explains: ‘Perhaps what is not always sufficiently recognised by the appointment panel is the vital role solicitors play, particularly at the outset, with clients. The decisions taken at that stage are usually so crucial that they shape the whole case – before barristers become involved.’

The lack of time ‘on one’s feet’ is not just an issue for solicitors. In 2015/16, four personal injury barristers made QC. However, as Andrew Ritchie QC, chair of the Personal Injuries Bar Association, points out: ‘Generally, personal injury and clinical negligence barristers settle most cases, so do not get before enough judges.’

As this year’s (and last year’s) competition show, the exception is international arbitration. In contrast to practices that specialise in court litigation, it is more common for solicitors running the cases to also argue them. Jagusch says: ‘While international arbitrators undoubtedly appreciate the highly skilled advocacy of barristers, they do not expect or require it. Many international arbitrators encourage counsel to let the junior lawyers take discrete issues or witnesses, thus creating an environment less daunting for the budding advocate.’

The QCA remains ‘concerned’ that the level of applications from solicitor-advocates is low, highlighting ‘a marked hesitancy’ to apply for silk. The Law Society has also pinpointed the need for diversity. ‘We know that solicitors have the advocacy skills and experience to be deserving of the title Queen’s Counsel, despite the small number of appointments and applicants,’ a spokesperson says. ‘We will continue to encourage solicitors to apply so that their contribution to advocacy is recognised with the awarding of more Queen’s Counsel appointments in the future.’

In it to win it

The list of new QCs may be dominated by white, male barristers, but the statistics point to a lack of applications from the people who could make the difference. ‘I would encourage more solicitors to apply for silk… The requirements and competencies are clearly set out and available to consider well in advance,’ Caplan urges. ‘There are many solicitors who can put up a good case that they meet all or most of the competencies, and if they are not appointed then there is very useful feedback available.’

Indeed, statistics published by QCA show that a significant number of applicants who succeeded this year had previously made unsuccessful applications. And as Richmond-Coggan reminds solicitor-advocates, ‘written advocacy is as important as oral advocacy for demonstrating excellence’.

One successful solicitor-advocate has some practical tips: ‘Download and study the form and related information provided by the panel. Do not rush the application; rather, wait until you are confident that you have the cases and can demonstrate the required excellence across the various competencies. Third, do not apply until you have a strong cadre of impressive assessors likely to support the application. Finally, consult with as many others as possible who have been through the process.’

Journalist and Gazette columnist Joshua Rozenberg, who was made an honorary QC this year, says: ‘I think the role has a useful purpose: encouraging high standards of advocacy. The fact that it was reinstated after being suspended by Lord Irvine suggests that it has a future in its present form.’

Katharine Freeland is a freelance journalist and editor