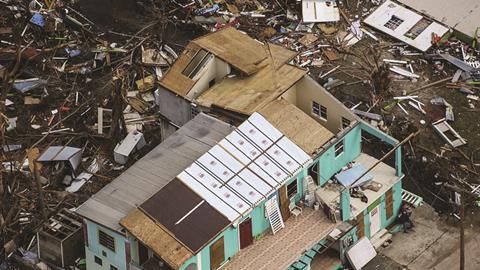 Hurricane Irma had the principals of offshore law firms in the British Virgin Islands scrambling to locate staff, partners and families, while issuing statements to clients and instructing law firms on the safe storage of client files.

For solicitors sitting safely in the UK last September, the idea of a law firm being wiped out by an ‘act of God’ was arresting, and many donated to disaster funds. It would not have struck many as immediately relevant to their law firm.

But, as the Gazette asked brokers and lawyers about the state of play in professional indemnity insurance, the impact of natural disasters emerged as a key theme in a market that, historically, has been more used to its problems being homemade.

Of course, law firms no longer need to renew their PII on 1 October – what was the annual bun fight – but can now vary the length and timing of cover. As up to a third of the market heads towards renewal, here are points you may wish to consider.

Internally, the market is stable

Martin Ellis, at broker JLT, confirms: ‘Regarding the claims environment and the choice available, we’ve not had it any better.’

Insurers have had a bad year

By the end of October 2017, the financial damage from hurricanes that struck Texas, Florida and the Caribbean was already being acknowledged by insurers and reinsurers. German reinsurance giant Swiss Re warned that virtually all its profit for the year had been wiped out by the vast costs of the disasters.

By January, the market was also able to take stock of the cost of earthquakes and wildfires in North America, which took global losses to close-on £100bn – the largest annual loss due to natural disasters in any year to date.

Providers will seek to recoup losses

Kevin Hood, head of legal services at global insurance brokers Willis Towers Watson, says the pressure on insurers is clear: ‘2017 was one of the worst years for natural catastrophes.’ The impact could be on ‘insurers’ reinsurance rates – the prices insurers pay to be insured – which are normally determined by early January’.

‘In the last six months a lot of insurers have been talking rates up [in response to] the impact of natural disasters,’ JLT’s Ellis says. So far, he adds: ‘Increases we’ve seen are in isolation – specific firms.’

We will have to wait until April for confirmation of any trend, Hood says: ‘April 1 2018 will be the first major renewal date for legal practices since insurers have renewed their policies and this will be an indication of whether rate increases will be passed on to law firms.’

Structure of the market helps

As Ellis points out, compared to the more general business insurance market, the structure of solicitor PII – where insurers must commit to certain conditions and log that commitment with the SRA – means: ‘You are either in or you’re out, and if you are in you need to temper the desire to increase rates.’

The widespread use of brokers helps keep rates down, Ellis adds – knowledgeable intermediaries aid competition. ‘It’s fair to say that what’s driven service for law firms is the brokers rather than the insurers,’ he insists, pointing out that a reduction in insurers’ practice knowledge has had an impact here. While ‘some insurers have exceptional claims handlers who stick with it’, he adds, ‘not many do much around risk management… insurers are not strong on that’.

He highlights Travelers and QEB as insurers retaining more expertise in this regard.

Solicitors have been working with the ‘continuing competence’ regime since 1 November 2016. This replaced a mandatory commitment to a minimum number of Continuing Professional Development (CPD) hours.

While the change has been welcomed by

many firms as a chance to bring in a more flexible and appropriate training regime, insurers have noted concerns at the disappearance of an identifiable, mandatory reassurance that firms invest in their solicitors, thereby limiting the likelihood of negligence claims.

Aaron & Partners’ Bennett advises: ‘The removal of the CPD hours obligation means that firms that regularly train their staff and have a risk management ethos really need to showcase this. Set out training that manages risks – particularly risks from people and cyber.’

The Law Society’s Professional Development Centre provides ‘a space to reflect on and record activities, in line with the continuing competence requirements’ (tinyurl.com/y72f8luc).

Law firms are preparing for the implementation of the EU’s General Data Protection Regulation. The GDPR comes into force on 25 May, and in addition to the headline fines (€20m or 4% of global turnover, whichever is higher), the regulator has access to sanctions that could disrupt a law firm’s business.

These include: warnings and reprimands; imposing a temporary or permanent ban on data processing; ordering the rectification, restriction or erasure of data; and suspending data transfers to ‘third countries’.

Bennett advises: ‘Explain your training programme so insurers can see you are scanning forward for the major issues.’

He also draws firms’ attention to the need to prepare for the new SRA Handbook (2018).

‘The threat from cyber issues is ongoing and still in the forefront of people’s minds,’ JLT’s Ellis reminds solicitors.

‘Some practitioners are taking out standalone policies to cover cybercrime,’ notes Richard Brown, head of legal services at Miller Insurance. But he reminds solicitors that ‘the main fraud risk, such as any loss of third-party funds, is covered by the PII policy itself’.

Then there are the robots

‘AI [artificial intelligence] and automation are very much on the radar of risk managers in law firms,’ Ellis warns, ‘with the top 100 firms moving ahead with AI and the risk community – brokers and insurers – racing to keep up and try and get ahead of it.’

It is the cliche that still applies. ‘It is still happening,’ Ellis confirms, though he notes that simple awareness campaigns have helped. ‘I have phone

calls from clients who have had near misses,’ he adds. ‘The frequency of claims [though] has reduced.’

He says the principle of the Friday afternoon fraud – what looks like a standard request to move money to an account, where the request has minor, hard-to-spot variations – is in essence the same as ever.

Cybercrime, though, adds an extra element – if a law firm’s defences are breached, this is often to gather convincing details to help authenticate the request. In gaining cover, firms are advised to set out the processes they have in place, from training to IT security.

For an firm with a property practice, this is a particular concern.

Miller Insurance’s Brown says residential conveyancing remains the highest weighted risk. In addition to cyber risks, he highlights ground rent clauses as a potential source of claims that solicitors renewing should show they are on top of.

Brown says most developers on new builds are correcting the clauses. ‘The issue for conveyancers is in the second, third or fourth sales of properties,’ he warns. ‘Solicitors should be ensuring these clauses are corrected by the developer now rather than letting it slide… We wouldn’t be surprised to see some claims coming through as we are getting hints about this becoming an issue.’

The SRA is due to return with another consultation on minimum PII cover – currently set at £2m in most cases. Previous proposals were heavily criticised and the regulator has retreated to draw up fresh ideas. The effect on the PII market of changing de minimis limits is hard to judge.

Ellis says: ‘The SRA consultation on minimum terms is likely due at the end of March – that’s going to have a heavy bearing on people’s thinking. It’ll be interesting. Actuaries look at [this market] all the time. It can affect underwriters’ appetites.’

The Solicitors Indemnity Fund (SIF) will close in 2020. SIF provides post-six-year run-off cover, and the fund is a legacy of the profession’s troubled history of self-insurance. It closes 10 years later than originally planned, following two extensions.

As Alan Radford, chair of the Law Society’s Professional Indemnity Insurance Committee, has explained: ‘The SIF board is currently looking at further potential for reinsurance. Any surplus that there may be in SIF will be released in phases to the SRA.

‘It is anticipated that this phased release will occur between 2023 and 2032. The SRA will be obliged to apply any funds released to client financial protection measures. Although the SRA has said that it is happy to listen to ideas in that regard, the most likely home seems to be the Compensation Fund.’ Some brokers will write additional cover for solicitors who believe they need it.

It is harder than ever to skirt over bad news

Once upon a time the 1 October rush to gain cover meant bad applications were often ‘washed in on the tide’. With more time – more permanent staff and fewer summer temps – insurers can take more time on their appraisals. Any problems the firm has require special attention. Aaron & Partners’ Bennett advises: ‘If you have to remove an issue to the SRA in any year get specialist advice before doing so, as often SRA investigations can be aided by expert advice which reassures the SRA it is being looked at objectively and effectively. Hence they and insurers have confidence in the firm.’

Your form needs to tell a story

Brokers stress the importance of a clear business plan and a narrative to explain why the firm presents as it does. A cover letter and even an appendix are good additions.

Bennett notes: ‘Firms with a specialist area and niche firms need to explain that expertise in depth. To get underwriters to recognise that skill, do not be afraid to outline this in an add-on section or sheet. But that in-depth knowledge removes the risks associated with a generalist practice.’

Lawyers charged with shepherding their firm through PII renewal this side of summer may feel like they have been kept in after school while their friends are off doing something more interesting.

Even if it suddenly gets sunny enough to play outside, though, they might reflect that the task could be more onerous and more expensive later in the year. Anyone completing the task in October will do so when insurers are keener to pass on losses to non-hurricane-hit customers; after the SRA’s consultation on minimum terms has been crunched by actuaries; and post-GDPR implementation (perhaps with some early law firm ‘scalps’ for the Information Commissioner).

All of which leaves early renewers more time to read and watch 2018’s hurricane coverage. As Miller Insurance’s Brown concludes: ‘The indications are that April renewals will be okay and if there are any upward pressures on pricing it will be more towards October.’