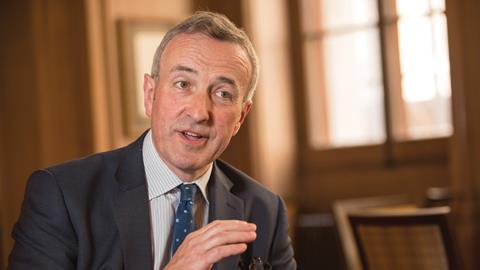 Grenfell Tower’s blackened husk looms as a terrible rebuke to those who would denude ‘ordinary people’ of fundamental rights in the name of shrinking the state.

This is not fanciful. One of the tasks of the public inquiry will surely be to determine whether the inability of residents to obtain legal aid prevented them from raising safety concerns.

The subject inevitably arises during my valedictory interview with outgoing Law Society president Robert Bourns, whose one-year tenure comes to an end on 6 July.

As public funding shrinks, court fees rise and costs recovery narrows, what can be overlooked is how the emasculation of access to justice absolves both state and private sector actors of responsibility for their actions.

In January, the now departed Sir Oliver Heald QC set out the government’s timetable for a review of the Legal Aid, Sentencing and Punishment of Offenders Act 2012. In terms of scope cuts and so much else, the long-awaited LASPO review cannot come soon enough.

‘What has come through clearly from voluntary organisations – legal advice centres, Citizens Advice and others – is that they are having to work so much harder,’ Bourns says. ‘In the past they were able to grab the attention of, for example, a statutory authority by writing a letter stressing that a person has a right that is not being respected.

‘Now, they are not even getting a response, because it is recognised by the [authority] that the risk of a claim is much reduced. If the risks of being held to account are diminished, that changes behaviour.’

So where does the problem go? Often, it is simply displaced, Bourns replies: ‘The problem doesn’t go away. It manifests in the areas of welfare, domestic violence, educational difficulty, exclusion orders and so forth.’

One example is a slew of reports from medical professionals, showing that a person’s inability to enforce a basic legal right, perhaps in employment, welfare or benefits, can have a knock-on effect on their health and therefore the NHS.

‘I’m not engaged in social policy,’ Bourns stresses, ‘but if you don’t give people access to a method of resolving their problems then this will add to and exacerbate other problems. In my “day job” of employment law, I have seen this myself. Employer behaviours and attention to certain rights appear to have reduced as a result of [the slump in claims following the introduction of tribunal fees].

‘It is simply not credible to suggest that only unmeritorious cases have been stifled by reform,’ he adds.

Ahead of the Queen’s speech, I ask the president whether he is confident these concerns are resonating at Westminster.

‘I think there is growing concern, evident through the work of parliamentary committees, about the quality of what is being done to the justice system in this country,’ he responds. ‘Any politician should realise that after keeping people safe, one of their primary responsibilities is to ensure the justice system works for the benefit of all and is accessible to all.’

Bookended by last June’s Brexit poll and an extraordinary general election, Bourns’ presidency has been the most eventful of any recent incumbent. As we speak, David Davis and the EU’s chief negotiator Michel Barnier are grinning and swapping gifts at the start of exit negotiations which are not expected to remain quite so cordial as the talks progress.

Chancery Lane’s immediate priorities for a ‘collaborative’ Brexit have been well aired: mutual recognition and enforcement of judgments; maintaining legal certainty throughout the process; and cross-border practice rights.

As leading continental economies covet a slice of the City’s peerless legal services market, one of the Law Society’s tasks is to convince other states that open borders serve their interests too.

‘The benefits that flow from the various directives on legal services are not exclusive to England and Wales,’ Bourns notes. ‘They are shared right across the community. What we’ve been trying to tell colleagues across Europe is that this is not a “one-way street”. Look at the benefits you get. For example, a German firm in London can use limited liability status to maintain practice rights across the EU, under the Establishment Directive.’

Similar considerations apply to clients, of course: ‘If you are [French-owned] Renault or EDF, or [German-owned] Bentley or Rolls-Royce, and you own plants with a supply chain in the UK, you’ll want reciprocal arrangements in relation to the enforcement of judgments.

‘One of the main points we are gently making over there is that the “English” law firms in France or Germany are mainly peopled by local bar members – it would come down to a structural alteration but common law would still be practised there as it is now.

The problem doesn’t go away. It manifests in the areas of welfare, domestic violence, educational difficulty, exclusion orders and so forth

‘If there is a wish that English and Welsh firms can somehow be shut out, that wish won’t be fulfilled. We hope that if colleagues across Europe recognise they are part of one professional community, we might alter the tone of the debate and that this will also resonate with the politicians.’

So how successful have these lobbying efforts proved to date?

‘Colleagues in Spain, Italy and some parts of northern Europe have been extremely supportive and I think that will increase,’ Bourns says. ‘Especially now people have got over the hurt and allocation of responsibility. I was told by one practitioner that I personally hadn’t done enough to stop Brexit!’

One might say this is one of the occupational hazards of the Law Society presidency – copping the blame for political decisions outside one’s immediate control.

Chancery Lane is facing another call to arms from members over the Solicitors Regulation Authority’s plans to allow solicitors to practise from unauthorised businesses. The Society warns this could sweep away longstanding consumer protections acknowledged as legitimate by competition watchdogs – it is also another assault on the very notion of a coherent profession.

‘What we said about consumer detriment is not in my imagination,’ Bourns stresses. ‘It’s in the [year-long study into the legal services sector] conducted by the Competition and Markets Authority [which concluded last December]. We are on the same page.’

The dangers here are so grave they could open the door to another mis-selling scandal, according to Bourns: ‘The public say they do not understand the level of protection that they will have if they take advice from a solicitor working in a regulated entity, as compared with one who isn’t.

‘So – no access to compensation fund, no access to minimum terms of insurance, and no legal professional privilege in relation to the communications between the solicitor and their employer’s customer.

‘There would be no obligation to follow the conflict rules, as things stand. I suppose if you look at where have we seen market failure in other contexts, what was PPI about? It was about a failure to recognise any professional standard and it was about a conflict of interest, wasn’t it?’

According to the regulator, says Bourns, enabling solicitors to bring their own code of conduct to bear in unauthorised businesses will somehow raise standards across the board.

But what if the solicitor comes in cold? What if they have little or no experience of working in a professional environment within defined ethical parameters?

‘I do wonder if that is a realistic expectation,’ he says. ‘If the key performance indicators of the entity that is employing you conflict with the rules enforcing professional standards, that is real test of character. I doubt it’s reasonable to expect that the individual will promote the professional standards. They will be really vulnerable, particularly at the outset of their career.’

If we are in danger of characterising the profession as beleaguered on all fronts, Bourns is keen to offer a corrective. ‘Speaking generally, I would say the profession is in pretty good health,’ he says. ‘Wherever I go, and I’ve been to many places in the regions, I find that practitioners are busy and reading the runes constantly in terms of which areas of practice they should be focusing on.’

He adds: ‘In relation to the proposed personal injury small claims threshold increase, I was really concerned about a significant adverse impact, not only on access to justice but also on the viability of law firms.

‘It is true that some firms would be seriously affected were those reforms to be introduced, but many have already taken steps to move away from that area – into traumatic injury, or medical negligence and so on.’

He adds a significant caveat – we await movement on further legal aid cuts and proposals to reform the litigators’ graduated fee scheme (LGFS). A second across-the-board cut of 8.75% in criminal legal aid rates will not be reinstated, Heald suggested in March, pending LGFS reforms, relating to reducing the number of pages of prosecution evidence on which solicitors are paid.

The Society stressed that the imposition of either cut will damage the supplier base and damage access to justice, while increasing the cost to the taxpayer.

Bourns is scathing. ‘I thought the [LGFS] consultation was just nasty, and designed to set a part of the profession against itself,’ he says. ‘It is a really unpleasant threat and I hope the [new] government doesn’t continue with it.’

Finally, we turn to the Law Society itself, which endured its own turmoil at the turn of the year when chief executive Catherine Dixon quit. She was unhappy with the pace of internal governance reforms, but Bourns leaves office upbeat about this.

‘Council has agreed the scope of the new Main Board and we will now proceed to implement that,’ he stresses.

‘What I will tell the AGM on 6 July is that the Society is in pretty good heart. [We] deliver on public interest issues day after day, year in year out. But there are always those who want to give us a kicking because they think we could do things differently internally.’

He adds: ‘No organisation in the legal services sector is perfect, and some are doing much less than we are on many policy issues. That’s not to say I am complacent, but the Law Society sometimes deserves a bit more credit than it gets.’

And with that, Robert Bourns is (nearly) gone – back to TLT, where he is a partner.

‘My first client meeting is on 10 July,’ he relates. ‘And although I won’t be losing interest in what the Law Society gets up to, nor will I be sitting on the shoulder of my successor.’