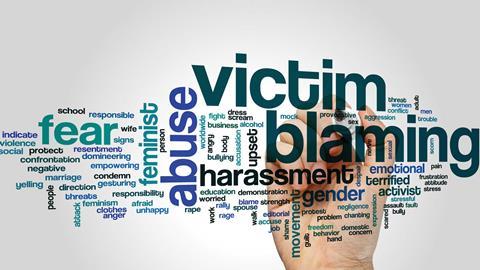 Sexual harassment: You too?

In resigning as secretary of state for defence, Sir Michael Fallon observed that what might have been acceptable 10 or 15 years ago is clearly not acceptable now. Or did he mean 110 or 115 years ago –when Irish nationalist Constance Markievicz grabbed and held aloft the wandering hand of the older man sat beside her at dinner. ‘Just look what I have found on my lap!’ she declared.

Imagine the ‘Me too’ thought bubbles.

We can safely assume the old chap was embarrassed. So what’s the lesson for Fallon and others here? It was acceptable until called out, I suppose – at which point it was unacceptable (well, over a century ago).

I worked for MPs in the Palace of Westminster, and can see that the legal profession has plenty in common with how politics works, particularly in the City. Positions of power are predominantly occupied by older men, working long and unusual hours with young ambitious people who are keen to impress (and who need to impress).

There’s plenty of booze and socialising, some of it more or less mandatory. People work in ‘silos’, which means the silo ‘head’ has a great deal of autonomy in setting expectations, and in using or misusing their power in a variety of ways.

What else? External reputation must be protected, meaning there is a preference for sorting out problems behind closed doors. Partners with integrity and good judgement might run their own silo in exemplary fashion, but rarely interfere with a ‘problem silo’ next door.

That is one of the reasons why many women working in the legal profession choose the adjective ‘rife’ when asked about inappropriate behaviour. As one put it to me: ‘Unfortunately, in many firms there is still a culture of grubby, old-fashioned harassment which firms do not want to acknowledge.’

Karen Jackson, a discrimination lawyer and managing director of law firm didlaw, had a City career before becoming a solicitor. She is emphatic: ‘If you did an anonymous survey, you’d be amazed how many women lawyers would say they’ve been harassed. Until attitudes change – until harassment has real consequences – that won’t change.’

The more serious ‘problems’ that will not go away are commonly dealt with through settlements that incorporate non-disclosure agreements (NDAs). ‘Problem lawyer’ remains in situ; harassed lawyer or support staff member moves on. Problem solved?

If you did an anonymous survey, you’d be astonished how many women lawyers would say they’ve been harassed

That view is confirmed by women contacted by the Gazette who work or have worked in City law firms – women known to the Gazette as professionals who are widely respected for their professional expertise.

‘There is the old-fashioned touching,’ one says, recalling the widely used nickname ‘octopus’ for one colleague.

Rape? Yes, and it took just three emails to have that volunteered (I’ve been asked to mention the fact only). A second unreported rape is related in a later interview.

‘Mirroring the news from [Westminster], social events are a nightmare for sexual harassment,’ notes another. ‘Men who are usually composed drink too much and begin to say and do highly inappropriate things.’

The expectation, she adds (and this is confirmed by others), ‘seems to be that women should just let these incidents pass, and put it down to people having had “one too many”.’

Yet that frames the woman involved as the problem to be dealt with, not the perpetrator.

What about comments termed ‘compliments’? Censuring their use causes indignation in some quarters. What’s wrong with telling someone they look nice?

It doesn’t consistently seem to land that way. ‘One of the big areas for harassment is male partners who regularly comment on a female colleague’s personal appearance,’ says one woman, adding: ‘I’ve found comments from superiors with whom I’m trying to establish credibility to be very undermining.’

As Jackson puts it: ‘I have clients from firms that have very good names. They say on their websites that they are committed to women’s careers, that they provide training and mentoring… but that is not translating into what happens on the ground. It’s for that reason that so many leave or don’t want to become partner.’

Then there are clients who share these bad habits. Suzanne Gill, now a partner at Wedlake Bell,  reflects: ‘Women won’t pursue leads because they suspect the target is more interested in an elegant pair of legs than a fine legal mind.’

The tendency is to work around or with these grim scenarios. Gill adds: ‘I remember giving advice to a younger colleague in that situation about eight years ago. I told her to take someone [with her] to drinks [with a client] in the wine bar, almost like a chaperone, and not to go at all if she felt personally worried or threatened, stressing that no business development win was worth that. But I didn’t mention to our head of department or anyone else that our staff were worried about this – because of course the advice I gave was the advice I didn’t get myself eight years previously. At the time I thought I was doing the right thing.’

And now? ‘Now I’m not so sure,’ she says. ‘If you’re being asked for the (wrong) reason then, even with a chaperone, you’re not being respected for intelligence, judgement or skills.’

So how well do firms respond to an allegation of harassment? Jackson is blunt: ‘If you go against a partner, the other partners will close ranks.’

At any one time, between a third and a half of Jackson’s clients are lawyers. ‘It is potentially career suicide to go against a high fee-earner,’ she avers. ‘I know of cases where the woman was asked to leave and the man was not even sanctioned.’

One woman, who signed a NDA on leaving her firm, echoes this perception: ‘From my experience, as soon as there is an allegation, they close ranks.’

In her case, ‘there were mountains of evidence, including an email from my harasser apologising for harassing me – he actually used the word – and they still took his side and said my case was motivated by frustrated career ambitions’.

Closing ranks, it is pointed out, means firms do not ‘level up’ to their own best practice standards – they level down. ‘Even when a firm’s culture is fine overall, there are often “pockets” where certain partners or teams are known for being “dinosaurs”. Their shabby behaviour gets laughed off by many with an eye roll or a shrug of the shoulders.’

‘Women,’ Jackson observes, ‘normally pay the penalty for raising this. It’s about victim-blaming. The attitude can be “it’s the way she dresses – clothes, cleavage – she’s asking for it”.’

She adds: ‘If you raise a grievance against a partner, and it is not upheld, the partner can blackball you – prevent you getting work, opportunities, promotion.’

All of which also damages law firms, one of the women already quoted reflects: ‘Many law firms seem to be at a total loss to understand why women aren’t progressing through their ranks, given that the graduate gender balance is fifty-fifty. But you never hear them consider whether sexual harassment might be one reason.’

The problem with even ‘low-level’ boorish behaviour is not just its unpleasantness. Such behaviour invariably goes hand in hand with a lack of respect for those harassed. That is a fierce headwind into which to progress a career.

In fact, some even struggle to get their career started at all. Gill recalls: ‘I was interviewed by a firm at two years’ PQE, in 1996.  The interviewers said that X, a female partner who is still there and would have been head of the team at that point, was so committed to business development that she would even take her clients to lap-dancing clubs. That told me so much about the culture of the place I went elsewhere.’

Business development brings us to the issue of non-lawyers working in the sector. I am told that support staff, notably in a marketing function,  face even worse treatment than lawyers. ‘There is an awful culture of treating business support staff as if they’re there for the sexual delectation of lawyers and partners,’ says one. ‘In particular, marketing teams across the board seem to be crammed with very young and pretty women, who are often referred to as the “marketing girls”. They are treated as if their role is to attend events and “look pretty” and bring their “bubbly” personalities to help conversation flow.’

Does it have to be this way? Arguably not. As Angela Hogan, chair of the Association of Women Solicitors, London, puts it: ‘The legal profession should be at the forefront of compliance with equality laws. We will be monitoring the profession’s response to recent further data in this area, supporting our members [and] using our influence with [AWS nationally].’

Purging sexual harassment from the workplace need not mean making work a romance-free zone, one should note in conclusion. As in politics, it remains as acceptable as music and dancing. Going back to the Palace of Westminster, many of my former colleagues – like me – married someone we met through politics. Three of them married MPs.

Surely the difference between that and habitual harassment is easy to spot. Increasingly, men who can’t tell their difference will find their hand thrust into the air.

Practising lawyers should be well aware that sexual harassment falls foul of professional rules and the law. They bear responsibilities as professionals and as owners of professional practices. The Law Society’s senior officers have issued a statement reminding the profession that ‘everyone has a duty to end harassment of any kind’ (news, page 1).

The Legal Services Board makes specific reference to its own duties under the Equality Act 2010, noting it ‘requires us to have due regard to the need to… eliminate unlawful discrimination, harassment and victimisation’. The Bar Standards Board also makes the link explicit.

For solicitors, among the relevant outcomes required by the SRA are:

‘O(2.1) you do not discriminate unlawfully, or victimise or harass anyone, in the course of your professional dealings’; and

‘O(2.4) your approach to recruitment and employment encourages equality of opportunity and respect for diversity.’

This is reinforced by the principles. Principle 9 requires that you: ‘run your business or carry out your role in the business in a way that encourages equality of opportunity and respect for diversity’.

Notes on principle 9 take the reader back to the relevant outcomes: ‘Whether you are a manager or an employee, you have a role to play in achieving the outcomes in Chapter 2 (Equality and Diversity) of the Code.’

With the definition of ‘harassment’ set out in the Equality Act, the regulatory position, and that taken within firms and chambers, should not be controversial. Yet it is debated as if from first principles internally and when alleged incidents are made public. Discrimination lawyer Karen Jackson says: ‘I’d like the SRA to be stronger on this.’

In 2016 the Bar Standards Board published research, Women at the Bar, showing that 56% of women barristers had been subject to sex discrimination at work, including sexual harassment. That figure excludes those women who preferred not to say whether or not they had experienced discrimination.

The conciliation service Acas has issued a new set of guidelines on sexual harassment (tinyurl.com/ycf5c2af).

The guidelines define sexual harassment as ‘unwanted conduct of a sexual nature. It has the purpose or effect of violating the dignity of a worker, or creating an intimidating, hostile, degrading, humiliating or offensive environment for them’.

Acas also sets out the forms that sexual harassment takes: