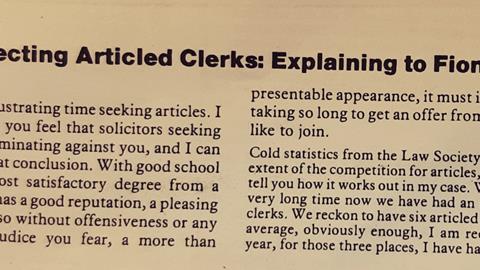 What Fiona did next

Before Christmas I went looking for a solicitor called Fiona. But first some background.

The letters page of the Gazette included an eye-catching exchange of views over a few months in 1982. The correspondent ‘BCR’ decided it was time to address the frustration being experienced by an aspiring lawyer, ‘Fiona’, who was failing to secure articles – a failure that meant her career ambitions were on hold.

‘I am sorry you are having a frustrating time seeking articles. I know from your parents that you feel solicitors seeking articled clerks must be discriminating against you,’ BCR wrote under the headline ‘Selecting Articled Clerks: Explaining to Fiona’. ‘I can see how you arrive at that conclusion. With a good school, the promise of a most satisfactory degree from a university whose law faculty has a good reputation, a pleasing personality and, if I may say so without offensiveness or any accusation of the very prejudice you fear, a more than pleasing appearance, it must seem strange that it is taking so long to get an offer from the type of firm you would like to join.’

She had to understand, BCR continued, that it was all very competitive, and that not all firms took articled clerks. ‘We have,’ he continued, ‘taken women articled clerks for well over 20 years. This seems to be well known in university circles, and the result is we receive a large number of applications from women.’ It would ‘not be difficult for me to fill all our three places each year with well qualified women… all the same, I feel I have to make an effort to limit the number of women whom we take.’

BCR concluded: ‘I don’t suppose that you find this very cheerful, but I hope that it has cleared the air a bit… the best of luck in your continuing search for articles.’

The air being less than thoroughly cleared, another Fiona entered the fray. ‘(Miss) Fiona Bell, Woking, Surrey’: ‘Sir, - I read with considerable interest your article "Selecting Articled Clerks: Explaining to Fiona…" not only because it described my situation entirely (I have just completed my degree at Queen Mary College, University of London, and have been searching unsuccessfully for articles for the past year or so), but perhaps more particularly because my name is Fiona.’

She was not especially impressed with the explaining BCR had given. ‘I do not think it is to Fiona or any other prospective clerk that the explaining must go,’ she wrote, ‘but to other solicitors who may well be future employers,’ and who were failing to provide sufficient places to feed the profession the lawyers it needed. ‘It is perhaps for the Law Society to investigate this area.’

That was in June 1982. BCR didn’t reply, but after a private exchange of correspondence, the firm of Pethybridges & Best, Torrington, Devon, did. Somewhat incredibly, to modern eyes at least, the firm wrote to tell readers that it had written to Fiona Bell, inviting her for an interview. She declined, and Pethybridges & Best thought her letter should be shared with Gazette readers: ‘Miss Bell’s letter is illuminating… she tells us that she does not want articles until September 1983, that she has been looking for articles in London and has written to firms there… “Devon is so far away from my area of familiarity that I would be uncertain I would be happy. I have moved about quite a bit, but only between The Fens and Berkshire, so I would rather stay in that area for the time being at least.”.

And there, with a notable breach of the expected confidentiality of private correspondence, the exchange of letters ends.

But what happened next? With only a first name and the knowledge she had a ‘more than pleasing appearance’ in the 1980s, there aren’t enough clues to track down the first ‘Fiona’.

But there is a Fiona Bell, qualified 1985, still on the roll – now a partner at RSM Legal, Farringdon Street, London. Was this her? ‘[It] might be me,’ she replied by email. ‘It does sound like something I would do, I’ve always liked making my views known in letters to publications.’

We meet for coffee, by which time we are sure she was the author of the second letter. 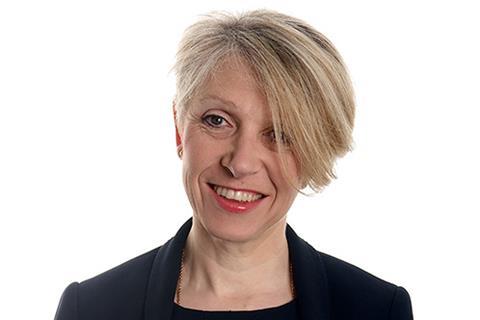 In the early 1980s the search for articles, she remembers, was hard for men as well as women. ‘One chap,’ she recalls, ‘had a folder of 100 applications’. He eventually became a magic circle partner, charged with running his firm’s Far East offices.

Fiona secured articles at a firm that had one woman partner, Surrey-based Mundays (the firm still exists). She remembers an even handed approach to the trainees. ‘I was treated just as shabbily as the others,’ but adds, ‘I was never made to make the coffee.’ She qualified and was supported to pass the Chartered Institute of Tax exams while a trainee.

Her next move was to Slaughter and May. The firm had no female partners at the time, she says, but doesn’t ‘recall any discrimination there’. While the head of the trust team had an ‘old school’ air, in meetings with clients ‘the first thing he did was stand up and do the tea’ himself. The husband of a Times journalist, he inspired a ‘huge amount of respect,’ she says.

Also in her team was Judith Ingham, later a partner and then consultant at Withers Worlwide, and this was a time when more women were now passing the Law Society finals exams than men. It felt, she says, as if ‘a new breed was coming through’.

Still, Fiona recalls ‘an interview with a well known City firm’ where she was ‘asked why a married woman like me didn’t want to stay at home’.

She spent a further five years at Nabarro with a year’s secondment to Australia before taking redundancy from the latter in late 1992 after the property market slumped. Fiona then started her own practice and family - working upstairs while a nanny and the daughters were downstairs.

Fiona Bell Solicitors was ‘a good idea’, she says, until her business became too successful, leading her to work ‘all hours’, which had not been the aim. She reached a deal with Memery Crystal to bring her practice there and work part-time. 'There was a strong female influence.' Lesley Gregory is now the firm’s chair. Gregory, she says, was ‘always supportive’ of childcare needs, and that they had children the same age.

Now, as a partner at RSM, how does she see her 34-year career as a solicitor? Was ‘Fiona’ right not to be deterred by rejections and letters in the Gazette?

Absolutely, she says: ‘I love my work – still. I do like what I do and I’m in a great place to do it… it’s a good profession.’ With no school run to juggle, she spends time working with many of RSM’s 35 regional offices ‘from Southampton to Lerwick’, but ‘maybe one day I will retire and become a bee keeper’.

So how does Fiona now view ‘BCR’ and Pethybridges & Best and their original exchange? Quite graciously as it turns out. ‘You should say your piece,’ she says, because then others ‘have the right to respond’. When prejudice is expressed, she concludes, ‘people can confront it’.