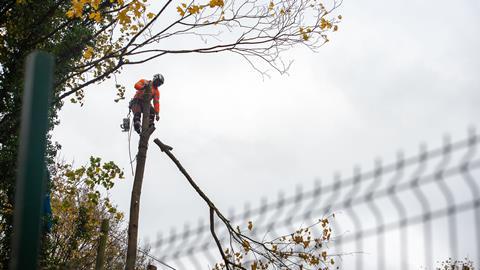 Contractors working on the construction of the HS2 rail line are not immune from prosecution for wildlife offences, the High Court has ruled in acquitting a protester who climbed into a tree to prevent workers from cutting it down.

Sebastian Roblyn was found guilty of an offence pursuant to section 241(1)(c) Trade Union and Labour Relations (Consolidation) Act 1992 for having ‘hindered a workman in the use of his tools with a view to causing him to abstain from doing a lawful act namely felling a tree’.

District Judge Malcolm Dodds held that, despite evidence the felling might have resulted in wildlife offences, the contractors had the legal right to fell the tree. Roblyn was convicted and ordered to pay a surcharge of £22 and court costs of £300.

However, his appeal by way of case stated – which was not opposed – was allowed by the High Court this week. Mr Justice Garnham said the district judge was ‘wrong to conclude that the felling of the tree was an act that the contractors had a legal right to do and it was not open to him to convict the appellant’.

‘An essential element of the alleged offence under s241(1) of the 1992 act was that HS2 Ltd and its contractors were acting lawfully and had a lawful right to fell the tree,’ Garnham said.

As the district judge accepted the felling of the tree might lead to the commission of offences under sections 1 and 5 of the Wildlife and Countryside Act 1981 and paragraph 43(1) Conservation of Habitats and European Species Regulations 2017, ‘the prosecution had failed to establish that the activity was lawful’, the judge held.

Garnham said: ‘As a matter of law, it is possible for HS2-appointed contractors to commit wildlife offences.’ He added: ‘That being so, if, as the district judge had found to be the case, there was evidence that the construction scheme, including the felling of the tree in question, “may have resulted in” wildlife offences then it cannot be said that contractors were acting lawfully or had a lawful right to fell the tree.’