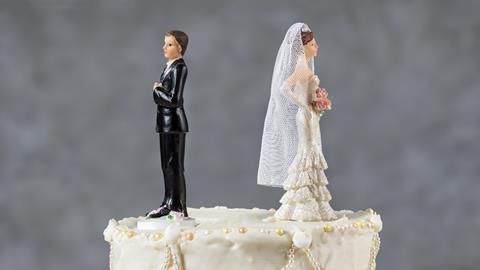 The Court of Appeal, Civil Division, in an appeal against a decision to divide matrimonial assets on an equal basis held that the appellant wife was correct to contend that the combination of potentially relevant factors, namely, short marriage, no children, dual income and separate finances, was sufficient to justify a departure from the equal sharing principle in order to achieve overall fairness between the parties.

Divorce – Appeal – Financial provision – Appeal from High Court to Court of Appeal – Ancillary relief – Wife appealing against judge’s determination of equal sharing of matrimonial assets in ancillary relief proceedings – Whether inevitably the case that matrimonial assets of divorcing couple to be shared on equal basis where marriage was short, no children, couple both worked and maintained separate finances, and one had been paid very substantial bonuses during relationship.

In 2007, the husband and wife met. That same year, they commenced cohabitation. In November 2008, they purchased their first home, SD, in joint names, with funds provided exclusively by the wife. In June 2009, they married. In October 2012, the parties purchased a second property, LC, in joint names. Although the parties had both worked prior to, and during their relationship, at the time the parties decided to purchase LC the husband took redundancy. In September 2013, they moved to live in LC. By that time, however, the marriage was already facing difficulties. In December, the wife filed for divorce. Whilst it was not an agreed fact that the couple maintained separate finances, several significant unchallenged aspects of their financial arrangements indicated that there was a marked degree of separation. Further, although the husband was aware that the wife received substantial bonuses during the period of the marriage, he was never privy to the details and, in addition to providing the total purchase price of the two houses, the wife fully funded the parties’ various holidays and bought the husband three cars. At the time of ancillary relief proceedings, the total assets held by either party amounted to £6.9m, of which LC represented £1.455m, SD represented £1.067m and £4.171m was credited to the wife’s bank accounts. The balance was made up with a range of other smaller elements. The figure for matrimonial assets of £5.45m used by the judge, in his final calculation was arrived at by subtracting £1.1m from £6.9m, being the rounded up value for SD, which the husband had conceded ought to be kept out of the matrimonial asset pot on the basis that it had been acquired by the wife before the couple were married, and further subtracting £350,000 to reflect the balance of other pre-acquired assets. The judge found, amongst other things that: (i) there lacked any suggestion that there was a deliberate and agreed intention on the parties’ part to maintain strict separation of their finances; (ii) there should not be an inroad into the sharing concept to which the parties in effect subscribed to when they married unless they chose to opt out (or attempt to do so) with a pre-nuptial agreement; (iii) the pattern with regard to the parties’ finances had been one of open-ended liberality regularly maintain to meet the wishes and even the whims which the wife had afforded them both; and (iv) there had been no sufficient reason that had been identified for departing from equality of division. Therefore, the judge held that the principled outcome would be that of the £6.9m of current assets the husband would receive a sufficient amount to leave him with £3.275m, half of the £6.9m, but after deduction of the top of the agreed £350,00. After deducting from the pool of matrimonial property, the judge held that there should be a total payment of £2.725m to the husband. The wife appealed.

The main issue was whether it was inevitably the case that the matrimonial assets of a divorcing couple should be shared between them on an equal basis where the marriage had been short, there were no children, the couple had both worked and maintained separate finances, and where one of them had been paid very substantial bonuses during their time together. Consideration was given to the principles in, and the decision of, Miller v Miller; McFarlane v McFarlane [2006] All ER (D) 343 (May) (Miller).

The present case had been one of the very small number of cases that justified the departure from the equal sharing principle. In so far as the decision of the judge in the present case had been at odds with the authoritative guidance of the majority in Miller and the actual decision of the full court in that case, he had been in error. The judge’s holding that the sharing principle had to apply unless the partied had entered into a pre-nuptial agreement was unsustainable and not supported by any authority. It followed that the judge’s finding that the conduct of the parties in relation to separate finances had fallen short of supporting a finding akin to a pre-nuptial agreement had to fall away as no longer being relevant. On the facts, the manner in which the couple had arranged their finances had been more than sufficient to establish that the wife had maintained her capital separately in a manner which was compatible with that described in Miller. The division of the assets determined by the judge in the present case had not accorded with the approach dictated by the majority of the House of Lords in Miller. Further, as a matter of law, the decision of the House in Miller had established that departure from the principle of equal sharing might occur in order to achieve the overarching goal of fairness in a particular case.  On the facts of the case, the wife was right to contend that the combination of potentially relevant factors (short marriage, no children, dual incomes and separate finances) was sufficient to justify a departure from the equal sharing principle in order to achieve overall fairness between the parties. In addition to retaining one half value of the two properties (£1.3m), the husband ought to receive an additional award to reflect a combination of the following three factors: (i) the standard of living enjoyed during the marriage; (ii) the need for a modest capital fund in order to live in the property that he was to retain; and (iii) some share in the assets held by the wife (see [111]-[114] of the judgment).

Frank Feehan QC and Deepak Nagpal for the wife.

Jonathan Southgate QC and Joseph Switalski for the husband.