Redesigning the legal aid system to pay defence practitioners earlier in a case could help to tackle long-standing disclosure challenges, the attorney general has told MPs.

Jeremy Wright made his suggestion to the House of Commons Justice Select Committee last month as part of its inquiry into the disclosure of evidence in criminal cases. A full transcript of Wright's evidence session was published on Friday.

Wright told the committee: 'One of the reasons why talking about frontloading the exercise is helpful is that we could think about the right way to design the legal aid system. If you are running a legal aid system - as I fear we rather too much are - where the bulk of the money comes at the end rather than at the beginning, you cannot expect anything other than the bulk of the work to be done at the end rather than at the beginning. We need to start to change behaviour, not least through all the tools we have, which includes the legal aid system. 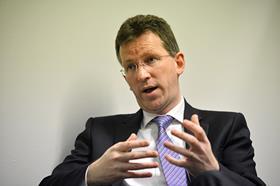 'One of the conversations that I and others need to have with the Ministry of Justice is about ways in which, if we cannot increase the overall amount - that is a different conversation, which I know you are engaged in as a committee - at the very least in the shorter term we should think about how we might change the emphasis of when fees are paid, to encourage work to be done early on disclosure by prosecution and by defence.'

Earlier in the session Wright told MPs that disclosure 'has been seen as an afterthought, an irritation and an extra bit of the process you have to do at the end'. Discussing the large amounts of digital material arising in cases, Wright said police officers and prosecutors must continue to use common sense and professional judgement to identify 'the needles in the haystack'. For instance, in a rape allegation involving two people in their 20s, social media material and information on telephones should be expected. Their absence on a disclosure schedule should be questioned.

Wright said 'appropriate pressure' should be placed on the defence community 'to say "You need to do your bit too"'.

He added: 'It is important in this process that the prosecution do their bit and look for anything that they think will meet the test, but then, of course, having done that initially, the defence have the opportunity to say, "Well, actually you are looking in the wrong place. We think there is material on this phone or that phone that will help you reach a more accurate view of what has happened on this occasion". I do not think that is always happening in the way it should.'

Wright questioned whether the Crown Prosecution Service's time is best used reviewing past cases to determine whether disclosure played a bigger part in case failure. Where some components of the criminal justice system get things wrong, other parts of the system 'are able to step in and pick up the mistake'.

He said: 'If you will forgive me a somewhat biased perspective, to take the case of Liam Allan as a good example, the reason why Liam Allan did not end up being convicted and sentenced to prison when he should not have been is that another part of the system - in that case an independent prosecuting barrister - was able to pick up what had gone wrong and put it right before it was too late. Of course, he should not have had to do so, but it is important to look at the criminal justice system, which will never be perfect, along the lines of not just what the CPS should do better but what other safeguards the system provides to make sure that mistakes are caught before they become very serious.'