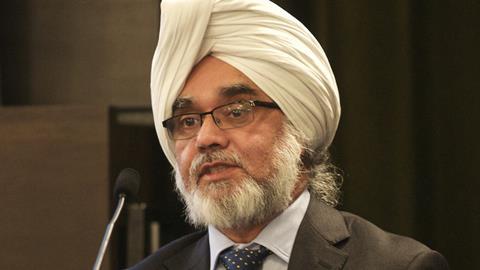 See you in court: judges prepare to sue lord chancellor

The Ministry of Justice has refused to comment ahead of a potentially embarrassing case in which serving judges will sue the lord chancellor over their pension arrangements.

Six High Court judges will accuse the government of unlawfully discriminating against them on the grounds of their age. The claimants, reported to be Sir Nicholas Mostyn, Sir Roderick Newton, Sir Philip Moor, Dame Lucy Theis, Sir Richard Arnold and Sir Rabinder Singh (pictured), were excluded from pension benefits after reform of the system last year.

They were each aged under 58 on 1 April 2015, when new cut-off points for eligibility for previous pension arrangements were introduced.

Those born between 2 April 1957 and 1 September 1960 can continue until a closing date between 2017 and 2022. Those born after 1 December 1960 are excluded from further active membership of the old scheme but may join the new one.

They say they were appointed on the understanding that they would never return to practise as barristers.

Gazette contributor Joshua Rozenberg has said it is unprecedented for serving judges to bring a claim against the lord chancellor and Ministry of Justice.

The claims are set to come before an employment tribunal on Monday. Lawyers for the judges will argue that their conditions of service ‘reflect the established constitutional principle, dating back to (at least) the Act of Settlement 1701 that neither the legislature nor the executive should subject judges to a reduction in pay (including deferred pay such as pensions) during the term of their offices’.

The ministry said it would not comment on an ongoing case. It has previously denied that the changes to the scheme raise the possibility of creating a second-class system for a section of the judiciary.

The lord chancellor Liz Truss has been called upon in the last week to give more public support for the judiciary who were criticised following last week’s Brexit judgment.

The MoJ has also had to fight off a claim from a former district judge who claimed to have suffered a nervous breakdown brought on by overwork and bullying.