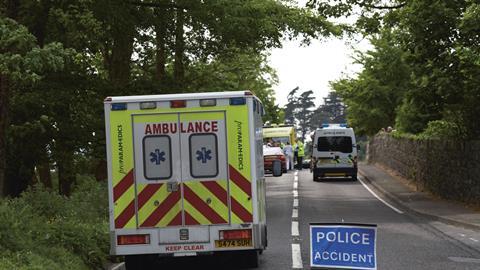 In November 2006, Sean Delaney was seriously injured in a car accident. A substantial quantity of cannabis was found in the vehicle in which he and the driver, Shane Pickett, were travelling.

Delaney brought an action against Pickett and his insurer, Tradewise, which promptly obtained a court order that it was entitled to avoid the policy pursuant to section 152(2) of the Road Traffic Act 1988. Its grounds were that the insured had failed to notify it that he suffered from diabetes and depression, and that he was a habitual user of cannabis.

Tradewise’s liability then passed into the scope of the Motor Insurers’ Bureau’s 1999 Uninsured Drivers Agreement. Tradewise now stood in the shoes of the MIB in defending the claim brought by Delaney. It invoked clause 6.1(e)(iii) of the agreement against him on the grounds that he knew or ought to have known that the car was being used in the course or furtherance of crime, namely to transport cannabis for the purposes of drug-dealing.

At trial, Delaney’s claim failed on the clause 6.1(e)(iii) point, as well as the public policy defence of ex turpi causa non oritur actio (from a dishonorable cause an action does not arise). He appealed to the Court of Appeal in Delaney v Pickett [2011] EWCA Civ 1532, but although he succeeded in overturning the judge’s decision on the ex turpi causa defence, he failed in relation to clause 6.1(e)(iii).

However, one of the judges in the Court of Appeal, Lord Justice Richards, noted in his judgment that no reliance had been placed by Delaney on the incompatibility of clause 6.1(e)(iii) with EU motor insurance directives. A belated attempt was made to rely on them in an application for permission to appeal to the Supreme Court but permission was refused.

Delaney subsequently brought a claim against the secretary of state for transport, contending that: (1) the exclusion in clause 6.1(e)(iii) was incompatible with EU directives, and the UK was thereby in breach of EU law; and (2) that the breach was sufficiently serious to give rise to liability to damages on the principles in case C-6/90, Francovich v Italy [1991] ECR I-53.

At first instance, Mr Justice Jay found for Delaney on these issues, and he gave permission to the government to appeal. In the Court of Appeal, Lord Justice Richards (with whom lords justice Kitchin and Sales agreed) considered the three main EU directives – 72/166/EEC 84/5/EEC and 90/232/EEC. These directives had (subsequent to Delaney’s accident) been consolidated into directive 2009/103/EC. The second directive, 84/5/EEC, gave member states the possibility of applying certain limited exclusions as regards the payment of compensation in uninsured drivers’ cases. Article 1(4) of directive 84/5/EEC set out those limited exclusions.

However, case law from the European Court of Justice had strictly limited the exclusions. Richards LJ considered three key cases:

Richards LJ said that on the natural reading of article 1(4) of the second directive, the only permitted exclusions were those set out expressly in the article itself. It was a general principle of EU law, specifically applied in the context of these directives by the court in Candolin, that derogations from a general rule were to be strictly construed. Consequently, Richards LJ held that clause 6.1(e)(iii) of the 1999 Uninsured Drivers’ Agreement was incompatible with article 1(4) of directive 84/5/EEC and that the UK was thereby in breach of its obligations under EU law.

This left a second issue – whether the breach was sufficiently serious to give rise to liability. Richards LJ ran through the factors identified by Lord Clyde in R v Secretary of State for Transport, ex parte Factortame Ltd (No.5) [1993] 3 CMLR 597, [2000] 1 AC 524.

One of these was the degree of excusability of the error made by the government in introducing a clause that breached EU law. The trial judge had said that there was a conspicuous paucity of any evidence as to how clause 6.1(e)(iii) had been brought into force. In relation to the other Factortame factors, the protection of victims of road traffic accidents was an important principle worthy of recognition. The claimant had a substantial claim for damages which clause 6.1(e)(iii) had precluded.

The implementation of this particular directive left little margin for discretion open to any member state. The language of directive 84/5/EEC was clear enough and Ruiz Bernaldez, coupled with a basic understanding of EU law principles, ought to have led any reasonable official acting with the resources of the government to conclude that the insertion of clause 6.1(e)(iii) could not lawfully be achieved. Consequently, Richards LJ would dismiss the government’s appeal.

It seems that the ‘Men in Black’ are still mounting a spirited defence in their never-ending war against the aliens of the planet European Union, but this decision of the Court of Appeal demonstrates their and the government’s vulnerability to a challenge under European law.

The restrictive meaning of clause 6(1) of the 1988 MIB’s Uninsured Drivers Agreement was raised 14 years ago by the House of Lords in White v White [2001] 1 WLR 481. There, the House of Lords simply imported the plain meaning of article 1(4) of directive 84/5/EEC (the meaning of a passenger’s knowledge in relation to an uninsured vehicle) into the agreement itself.

Since then, other cases have illustrated the potential incompatibility of both uninsured and untraced drivers agreements. Byrne (a minor) v The Motor Insurers Bureau and the Secretary of State for Transport [2008] EWCA Civ 574 led to substantial changes to the limitation provisions in the 2003 Untraced Drivers Agreement.

More recently we have the case of Vnuk v Zavarovalnica Triglav D.D. CJEU (Third Chamber) 4 September [2014] C-162/13, which calls into question the compulsory insurance exception built into both the untraced and uninsured agreements that excludes any accident caused by a motor vehicle not intended or adapted for the road, on private land.

We are still awaiting government proposals for a new consolidated MIB agreement.

It will be interesting to see whether the MIB and the government accepts the full force of EU law.