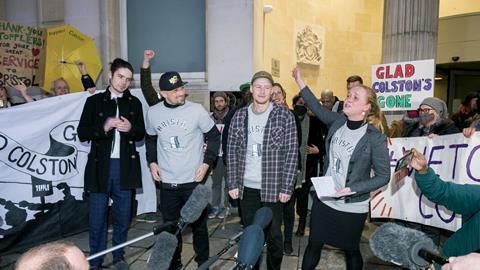 The case of the ‘Colston Four’ this week reached the Court of Appeal, where attorney general Suella Braverman was accused of mounting an attack on the jury system, just a week after lord chancellor Dominic Raab declared the right to trial by jury ‘part of our proud history’.

The appeal concerned the acquittal of four people for criminal damage over the toppling of slave trader Edward Colston’s statue in Bristol in June 2020, after the trial judge directed the jury to consider ‘whether it is necessary in a democratic society… that the defendants should be convicted for their actions’.

Braverman asked the Court of Appeal – which cannot overturn the not guilty verdicts – to rule on if it is a question for the jury to decide whether convicting the defendants of criminal damage is a disproportionate interference with their human rights.

‘No balancing exercise is appropriate,’ her counsel Tom Little QC told the court. ‘Damage to property is – like violence to the person – a simply unacceptable way to engage in political debate.’

Little argued that the question of whether any interference with defendants’ rights under Articles 9, 10 and 11 of the European Convention on Human Rights (ECHR) was proportionate ‘was not one which it was proper to leave to the jury in a case of criminal damage.

‘Acts of criminal damage, whether it be that statue, whether it be other statues in many other towns or cities around the country, [they] cannot be pulled down and damaged in the way that this was in pursuit of or pursuant to the rights under Articles 9, 10 and 11,’ Little added.

Lawyers representing one of the Colston Four said the attorney general’s argument ‘extinguishes the role of the courts to review the [ECHR] compatibility of a criminal conviction that restricts expression in individual cases once the offence has been deemed to be intrinsically proportionate’.

Clare Montgomery QC told the court in written submissions: ‘This is, at its core, fundamentally at odds with the constitutional shift brought about by the [Human Rights Act 1998] in the protection of rights of expression and assembly.’

She said juries are ‘by far the most reliable arbiter of society’s views on fairness and balance’, and emphasised that they are regularly asked to make value judgements.

‘The fact that the jury may have to weigh competing values does not present particular difficulty,’ Montgomery said. ‘Juries are often asked to make judgements about balance in relation to moral as well as legal issues. Decisions about dishonesty, abuse of position, indecency, as well as reasonable excuse, often involve difficult questions of judgement.’

She added: ‘The suggested difficulty of inconsistent or unreasoned decision making is no more than a general attack upon the use of juries, rather than a reasoned basis for denying a jury trial to direct action protesters.’

In an interesting exchange with the lord chief justice, Montgomery accepted that her argument could apply to other types of offending, including common assault and theft. She said that ‘most cases of common assault will not involve the expression of a political view’ but added that the offence may arise in the context of protests.

Lord Burnett asked if theft might require a consideration of a defendant’s ECHR rights, to which Montgomery replied: ‘If it is causally connected to the demonstration, yes.’

Human rights group Liberty intervened in the case, arguing that ‘it is incumbent on the court, as a public authority, to justify an interference with the right to protest’.

Jude Bunting QC said: ‘The wider concerns expressed by the attorney general (about the potential for inconsistency, the lack of reasons given for jury verdicts, the difficulty for a defendant to challenge a jury verdict on irrationality grounds) are really concerns about the jury system as a whole. Those concerns are overstated.’

In a statement, Braverman said: ‘Trial by jury is an important guardian of liberty and critical to that is the legal directions given to the jury. It is in the public interest to clarify the points of law raised in these cases for the future. This is a legal matter which is separate from the politics of the case involved.’

But that did not impress Montgomery, who stated wryly in her written submissions that she was proceeding ‘on the assumption that this reference was not made for party political purposes’.

If the government’s hope was that the Bill of Rights would draw a line under such debates, it may have been premature.