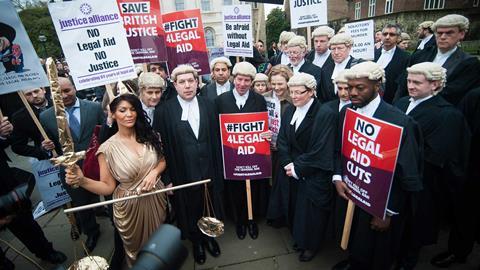 News focus: Criminal barristers are poised for action over pay - what about solicitors?

The criminal bar will not wait any longer for the lord chancellor to pump more money into legal aid. Solicitors are uniting behind barrister colleagues, but Dominic Raab appears in no mood to budge

The message from the criminal bar to the government is clear: move to implement the recommendations of the Criminal Legal Aid Review that you commissioned or we are ready to strike.

Nearly everyone who responded to a survey by the Criminal Bar Association on the government’s timetable favours direct action. The poll closed on Monday.

Lord chancellor Dominic Raab has promised to publish the government’s response to the review, alongside a consultation on proposals, by the end of March. However, by the time the consultation ends and the necessary preparatory work is done to implement any recommendations , the legal aid community may not see reforms until autumn at the earliest.

This could be too late for solicitors. Sir Christopher Bellamy QC, chair of the independent Criminal Legal Aid Review, told the Commons justice select committee on Tuesday: ‘We have a situation where fees have remained unchanged for 14 years [since 2008] except to go down by 8.75%. Some fees have had no increase for over 30 years. The number of firms is in decline. It is very difficult to recruit new blood. The private profession has fallen behind the Crown Prosecution Service in terms of the salaries it can offer and has therefore been losing a great deal of talent.

‘In all those circumstances, there must be a serious question mark as to how long the private provision of solicitors’ services can feasibly continue.’

Law Society president I. Stephanie Boyce said Chancery Lane shares the bar’s view that the Ministry of Justice needs to respond quickly ‘and get the recommended investment to our members as soon as they can’.

Daniel Bonich, chair of the Criminal Law Solicitors Association, said: ‘Our members share the bar’s frustration at the pace being set for these urgent changes, and understand their desire to take action. Many higher-court advocates will wish to join their action and firms with HCAs will have a common interest with the bar in resolving the issues they face.’ He added that, where clients had chosen to be represented by a barrister, ‘it would not be right to substitute in an HCA where no barrister is available due to any action’.

The London Criminal Courts Solicitors’ Association weighed in on Wednesday, revealing that it has been in talks with the CBA, and asserting that ‘both sides of the profession are united in their aims’. The LCCSA wants ‘an immediate initial increase of 15% to all current fee schemes applied to the 2008 rate of pay’.

The CBA is giving Raab until 14 February to commit to substantially increasing legal aid funding. Will he relent? Raab told BBC Radio 4’s Today programme that he did not think strike action would be supported across the justice system, ‘and I certainly don’t think that will be supported by the public’.

The Crown court backlog, which reached a record high last June, has fallen slowly since. Direct action would reverse that trend – something Raab will be keen to avoid.

Bonich says the criminal justice system cannot operate without the goodwill of solicitors and barristers, who routinely go the extra mile for free to keep the wheels of justice turning. He said: ‘We believe that in the event of action by barristers and advocates, courts across the land will grind to a halt and the hard work of undoing the backlog will be destroyed. It will be solicitors who are at the frontlines and clients, witnesses and victims who will see their cases delayed and who will bear the brunt of such action.

‘We cannot have a repeat of the attitude taken by some courts previously of forcing solicitors and their staff to attend court to conduct hearings for which they have neither the capacity or desire to conduct, and our members will not tolerate a repeat of some of the attempts by courts and regulators (well-meaning or not) seen previously that placed entirely unreasonable burdens on busy and hardworking and underpaid solicitors.’

CBA chair Jo Sidhu QC said there will inevitably be some impact on both criminal barristers’ and solicitors’ incomes should direct action be necessary, ‘but we are resolute in our belief that taking tough, unified decisions today will secure a stronger future for tomorrow’s vibrant independent criminal barrister and solicitor professions’.

Raab cannot afford to lose any more criminal practitioners. As Bellamy warned MPs: ‘Although I don’t think at the moment we have a situation where we have a serious constitutional issue, we’re not far off it if something is not done. I have seen this review as not just about legal aid. It’s about the basic principle of a fair trial. It’s about the basic health of a justice system. No civilised country can maintain a civilised society without a functioning and fair justice system.’