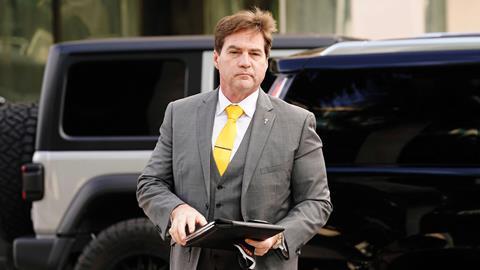 Not many litigants would hail as a victory a court award of $100m (£74m) against them, but Dr Craig Wright seems to be playing a long game. After a Miami jury last month ruled that he should cough up that sum, the UK-resident Australian computer scientist said: ‘This has been a remarkably good outcome and I feel completely vindicated.’

The vindication to which Wright refers is that the decision was predicated on his claim to be the originator of the Bitcoin system of digital cash. Specifically, he says he wrote the 2008 online paper, published under the pseudonym ‘Satoshi Nakamoto’, which set out a protocol for creating up to 21 million cryptographic coins as well as the practically unhackable ledger system which prevents double-spending. At today’s prices, the bitcoins so far ‘mined’ are worth more than £600bn; ‘Satoshi’s’ share would add up to more than £38bn.

Predictably, sums of money – and the controversy surrounding Wright’s claim – have released an ongoing torrent of litigation. The Miami case, known as the Kleiman litigation, was brought by the estate of one of Wright’s former business collaborators, initially seeking a 50% share of ‘Satoshi’s’ Bitcoin wealth. Against that, the award of $100m could be said to be a ‘good outcome’. For its part, the claimant’s legal team hailed ‘a great win for our client and justice’.

In the year ahead, the focus of legal action will shift to England and Wales, Wright’s place of residence since 2016, with at least four separate cases in the works. They include:

Wright’s lawyers will also be in court in an action against Norwegian Bitcoin enthusiast Magnus Granath over a tweet hashtagged ‘#CraigWrightIsAFraud’. In January last year, the Court of Appeal overturned an earlier ruling declining jurisdiction under article 27 of the Lugano Convention, on the grounds that Granath had already activated proceedings to seek declaratory relief in Norway. In Wright v Granath, two out of three appeal judges found that the Lugano Convention on jurisdiction and recognition of judgments did not apply, because the Norwegian action did not mirror the English one. Among other issues, the court heard that Norwegian law requires published words to be ‘libellous, made negligently, and be unlawful’ before damages can be awarded – a higher threshold than that of  England and Wales.

Wright has, however, failed to persuade the English courts to hear his case against another critic, Roger Ver, a US-born citizen of St Kitts and Nevis resident in Japan. A claim form was served personally on Ver while he was visiting London, but in 2020 the Court of Appeal ruled that England was not the ‘most appropriate jurisdiction’.

For many crypto-pundits, these actions are merely a prelude to the main event: an attempt by a Californian body, the Crypto Open Patent Alliance, to obtain an English High Court declaration that Wright is not the author of the Bitcoin white paper. This is an unusual ask as no one has asserted a rival claim to the paper. A costs and case management conference is expected by early summer.

At a preliminary hearing in COPA v Wright, His Honour Judge Paul Matthews last month rejected a bid by Wright to exclude evidence from the Miami hearing on the basis that it would ‘cause unfair prejudice’. On the contrary, ‘questions [about Wright’s credibility] are exactly the kind of debate which will need to be had in order to test the defendant’s claim that he is indeed Satoshi Nakamoto’,  the judge ruled. ‘If [Wright] survives these tests, it makes his claim all the stronger,’ he added.

We shall see. But the Wright litigation has so far proved one thing for certain: that the early dream by crypto-evangelists that technology would render lawyers redundant was an illusion.