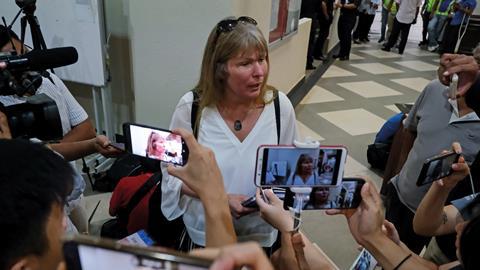 Journalists, campaigners – and lawyers – are fighting back as the rich and powerful allegedly seek to avoid scrutiny by bogging down critics in financially crippling litigation. New curbs are proposed

In the week before Christmas, freelance journalist Clare Rewcastle Brown expects to spend two nights camped in a London solicitor’s office to enable her to defend herself remotely against a charge of criminal libel in Malaysia. The hearing is the latest step in a decade of litigation and other ‘persecution’ Rewcastle Brown claims she has suffered since she began to report an alleged corruption scandal in the Malaysian state of Sarawak.

A conference in London last week heard it alleged that the attacks on Rewcastle Brown are a prime example of ‘strategic lawsuits against public participation’, or SLAPPs – legal attacks by the rich and powerful on journalists and activists trying to uncover wrongdoing. The alleged aim is not to right a wrong, but to bog critics down in financially crippling litigation and to deter others from repeating their allegations.

‘Lawyers have the ability to financially destroy you, not by being right, but using a case to bully you,’ Rewcastle Brown said. ‘When you start to engage with these guys you find yourself in the midst of a massively expensive process. You’re dealing with wealth, and that’s a wonderful tool for them.’

At the centre of what has been described as a ‘SLAPP industry’ is London’s legal sector and its courts. Last week’s Anti-SLAPP conference, organised by the Justice for Journalists Foundation and the Foreign Policy Centre, heard outspoken criticism from lawyers about their own colleagues’ role in this business. ‘As lawyers we need to speak out,’ said freelance media lawyer Sandhiya Sophie Argent.

At the event, a working group of legal and other experts published a three-tier set of recommendations for curbing SLAPPs. They were based on the principles that cases should be dealt with as quickly as possible in court, that costs for defendants should be kept to a minimum, while litigants should face sanctions for cases judged to be SLAPPs. Finally, the use of SLAPPS ‘needs to be de-legitimised’.

To achieve this, the working group proposes a mixture of judicial guidance, civil procedural reform – and a UK anti-SLAPP law, along the lines of those in force in 32 US states. Specific measures, on which the group is inviting comments, include:

To judge by questions raised last week – including by Conservative MP Bob Seely, a campaigner against ‘lawfare’ – the most controversial element is likely to be the need for a specific new law.

One member of the working group, Rupert Cowper-Coles, a partner at City firm RPC specialising in defending media organisations, acknowledged that reforms introduced by the 2013 Defamation Act had been a step forward, but said that litigants were finding new avenues. ‘We’re seeing increasing use of data protection laws,’ he said. ‘These don’t currently have the protections and safeguards which we’ve built in to defamation... we don’t have a public interest defence and the journalism exemption is looking narrower and narrower by the day.’

Charlie Holt of free speech group English PEN said the law should create ‘an affirmative right to public participation’ as well as a filter mechanism incorporating a mechanism for summary disposal. When a case is ruled to be a SLAPP, all costs would be born by the litigant, who would also be liable for exemplary damages.

Another contentious issue in ‘de-legitimising’ SLAPPs might be that of identifying lawyers with their clients. ‘It’s a sensitive thing to hold lawyers to account for those they represent,’ Cowper-Coles conceded, ‘but there are definitely firms out there over-stepping the mark.’

No doubt wisely, he did not name names. But he admitted to sometimes feeling ‘a sense of shame about this jurisdiction’.