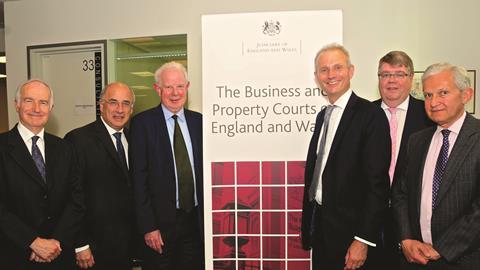 Napoleon I must be spinning in his grave. One of his key legacies, the civil justice system designed by his deputy Jean Jacques Régis de Cambacérès, which today underpins most continental jurisdictions, has been snubbed by the latest government of the French Republic. Speaking in New York last month, president Macron’s finance minister announced that a new Paris court to settle international commercial disputes would run to common law rules – and conduct proceedings in English.

France is only the latest jurisdiction to spot a business opportunity in commercial law. The federal German government last year published a 30-page glossy brochure, in English and German, claiming that the label ‘Made in Germany’ is as much a seal of quality in law as in manufactured goods. Stressing the benefits of codification, it states that ‘not only are contracts under German law more concise, they are also more cost-effective and reliable than contractual agreements under English or US law’.

Other contenders include the Netherlands, long established as a centre for arbitration, where the English-language Netherlands Commercial Court is due to open next year, subject to the necessary legislation.

Noting the surge in continental activity, Sir Geoffrey Vos, chancellor of the High Court, observed dryly last month: ‘If one were a cynic, one might think that some of them were hoping to capitalise on the uncertainties created by Brexit.’

There is little doubt that a slice of London’s market is the sought-after prize. As lobby group TheCityUK points out: ‘More arbitrations take place in London than in any other city in the world. English courts are renowned for being a forum where litigants can be confident their disputes will be determined on their intrinsic merits.’ Law Society research demonstrates the importance of this for UK plc, with every percentage point of growth in the legal sector adding £379m to the economy.

While it would never use the term, the senior judiciary in England and Wales is fighting back. ‘We cannot just rest on our laurels and hope that the international business community will be prepared to take a chance on the UK’s legal systems,’ Vos said. ‘We need to be proactive and we need to be prepared to take active steps to improve our offering if the clarion call that Britain is open for business post-Brexit is going to be taken seriously.’

One such active step is the rebranding of the specialist jurisdictions of the High Court under the name ‘The Business and Property Courts of England and Wales’. Explaining the decision to abandon the historic term ‘Chancery’, Vos noted: ‘We should reach out to the occasional users of these courts, and national and international business generally.’

Another aim for the rebranding is to ease pressure on the Rolls Building in London by handling cases wherever possible in the regions from which they originate. Business and Property courts in Birmingham, Manchester and other regional centres will be connected by digital ‘superhighway’. The watchword will be: ‘No case should be too big to be tried outside London’. Although pitched as a gesture to regional legal centres, the idea that cutting waiting times will make the Rolls Building even more attractive to international litigants cannot have been far from judicial minds.

A second arm to the fightback is more subtle. This is the lord chief justice’s brainchild of a ‘standing international forum’ of global commercial courts. The forum’s inaugural meeting in London in May attracted judges from across Europe and Asia, as well as from the close family of Commonwealth common law jurisdictions. Its first aim is to produce a multilateral memorandum that explains how, under current rules, judgments of one commercial court may most efficiently be enforced in the country of another.

Officially, the idea is that the market will be better served if best practice is shared and courts work together. However, the location of the permanent secretariat in the Rolls Building should help preserve London’s place as the mother of commercial courts, whatever global competition emerges.

As for the government’s role in maintaining London’s (and Edinburgh’s) position, this been the centre of a stream of speeches from the senior judiciary following strained relations with recent lord chancellors. The emphasis is that judicial independence is as important an asset to the national economy as it is to civil liberty. In an outspoken address last month, the soon-to-retire lord chief justice, Lord Thomas of Cwmgiedd, reminded the new lord chancellor of his duty as guardian of the independence of the judiciary, ‘which is fundamental to the maintenance of the rule of law, our democracy and the prosperity and good order of our state’.

Making a surprise appearance at last week’s launch event, the current incumbent David Lidington went out of the way to praise his judicial hosts as ‘responsive, forward-thinking and clear in their purpose’.

He said: ‘People are drawn to the UK from other nations as they have been for centuries and will continue to do so long into the future. They come here because they are seeking decisions that come with a recognised guarantee of impartiality, integrity and enforceability. They seek our high-quality specialist practitioners and judges who have an unrivalled reputation.’

These warm words were reciprocated when Vos said the new lord chancellor had hit the ground running. However, whether the cosy relationship can long endure other pressures between the executive and judiciary remains to be seen.

And, as Lidington implicitly acknowledged, London’s position as a magnet for international civil litigation was not achieved through government policy. Even in the go-go years of the 1980s, legal services were seen as only a fringe element of the City’s Big Bang. Since then, policies aimed at promoting legal services have never had the electoral attraction of, say, the semiconductor or steel industry. History suggests that governments find it easier to break confidence in a legal system than to build it. Even if Napoleon would not necessarily agree.