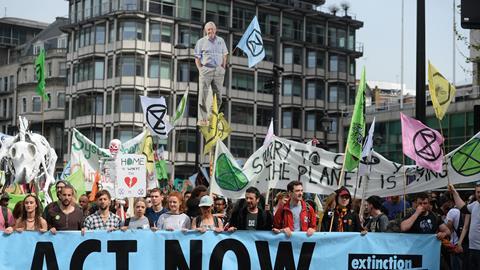 The countdown to the UN Climate Change Conference has added impetus to the government’s environmental priorities. In-house and private practice lawyers are coming on board with a raft of initiatives

In the run-up to hosting this year’s 26th UN Climate Change Conference, the UK government says it will work closely with businesses on tackling climate change. Recent environmental initiatives that have emerged in the legal sector suggest many lawyers will be keen to talk.

Lawyers for Net Zero was set up this year to help in-house lawyers take a lead in helping their organisations deliver on climate change commitments.

Executive director Adam Woodhall told the Gazette he has been focusing on how to generate climate action for 15 years: ‘What started becoming clear to me last year was that we needed to enable people to take significant climate action within their roles. It’s not just about taking a reusable cup to work but how, for instance, you influence suppliers.’

Anthony Kenny, assistant general counsel at pharmaceutical giant GlaxoSmithKline, is one of around 30 legal chiefs who have been piloting draft net zero action principles since April.

Kenny said: ‘With different organisations the legal teams will be different. You can be a sole lawyer doing everything… One of the great things about getting involved in the pilot is you can get a sense of level of comfort. It might just be the case of being an internal advocate or you want to become an expert and lead it. What we have seen from the pilot is there’s a real passion on this topic in the legal world. Lawyers for Net Zero provides a platform to explore that a little bit.’

'Lawyers will be asked to help their clients identify, avoid and manage physical, liability and transition risks linked to climate change'

Kirin Kalsi, head of legal at E.ON UK, told a climate action webinar last week that if you had asked her a year ago about net zero, she would have had two answers. She would have replied that it was too big a problem for her as a lawyer to make a real difference; or that there were too many angles and she would not have had time to think about it. Also, there were plenty of other colleagues at her organisation working on the topic of net zero. So what changed her mind?

‘At the beginning of this year, everyone started talking about environmental, social and corporate governance [ESG],’ she recalled. The group-wide CEO announced that ESG would be a focus area. All this coincided with Woodhall approaching Kalsi about the concept of Lawyers for Net Zero.

‘It got me thinking, how can we as the in-house legal team make a real difference?’ Kalsi said. ‘When I discussed this with others, I realised that we as in-house lawyers can play a much more proactive part in this journey towards net zero. I discussed it with my team and was amazed at how enthusiastic they all were about this topic.’

Kalsi and her colleagues began their net zero journey with ‘small steps’, such as cutting down on printing. People were printing a lot less anyway because of the pandemic. ‘But let’s not go back to the old ways of printing a whole lot of paper that we end up throwing away shortly afterwards,’ Kalsi said. The team moved to electronic signatures. Kalsi acknowledged this was also driven by the pandemic, but added: ‘Let’s not go back to wet-ink signatures if we can avoid it’.

Recalling a comment by Thomas Birr, chief strategy and innovation officer at E.ON, who described getting to net zero by 2050 as a ‘once-in-a lifetime-project’, Kalsi said: ‘It would be nice to be part of a once-in-a-lifetime project.’

A horizon-scanning report on climate change risks published by the Law Society said that if 2019 could be called the year the world woke up to the climate crisis, the next 30 years will go down in history as years of responding to this wake-up call.

‘Lawyers will be asked to help their clients identify, avoid and manage physical, liability and transition risks linked to climate change’, the report says.

But recent conversations around climate change have demonstrated that lawyers are driven by more than just what their business needs. As Daniel Grimwood, senior legal counsel at Arup, told last week’s webinar: ‘I want to have a liveable planet for me and my daughter in years to come.’