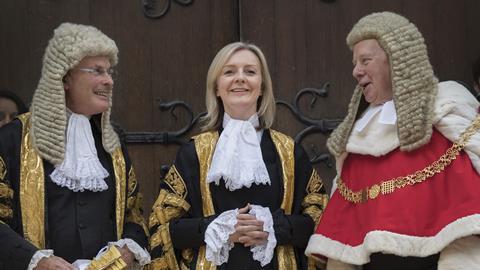 Liz Truss spent her first full day as lord chancellor visiting two prisons, but it is becoming increasingly clear what her other key priority is: improving diversity in the legal profession, particularly within the senior judiciary.

The first indication of this emerged last month, where Truss told the Conservative party conference that a modern justice system ‘is not just reflected in its practices and processes, but in its people’. The conference heard that women make up only one in seven QCs and one in three law firm partners. Fewer than one in 10 judges come from ethnic minorities. A quarter went to state schools.

‘This is modern, global Britain – we can do better than this,’ she declared. ‘We need to open up our legal system so that it draws from all available talent in our society.’

Truss is staying true to her word. Since coming under heavy fire for her response – or lack of it – to press criticism of the Article 50 judges, the lord chancellor could have come up with an excuse not to show for her scheduled appearance at last week’s Spark21 conference, part of the First 100 Years Project to celebrate women in law. But she didn’t. Not only that, we got the clearest indication yet of how much diversity matters to her.

Truss told the conference she wants to see more women and ethnic minorities at senior levels in law firms. She has held ‘positive meetings’ with the magic and silver circles, and the Law Society, ‘on how we can widen the talent pool to people from all walks of life’.

As well as more women and ethnic minorities in the judiciary, Truss also wants to see more solicitors ‘welcomed’ into the upper echelons.

Truss said: ‘The abilities needed to be a judge are legal knowledge, integrity, intellect and drive – not how many hours you have put in on the circuit or spent in the courtroom.

‘It shouldn’t matter if you have practised in a barristers’ chambers in Leeds or the Government Legal Service in London. Whether you’re a recorder in Bristol or general counsel for a company. What matters is talent.

‘We are changing the selection process to make sure the wider merits of all candidates are recognised from the outset – ensuring that talent and ability trump “box-ticking”.’

Truss announced she is bringing forward four proposals, the most notable being how she intends to open up the High Court.

Truss wants to make it easier for the country’s ‘top talent’ to go straight in.

She said: ‘The next recruitment campaign will for the first time open the door to a wider pool of “direct-entry candidates”,’ she said. ‘Individuals who, while exceptionally talented, have not had previous judicial experience. These may be academics, in-house counsel or perhaps magic circle solicitors who spend more time in boardrooms than courtrooms.’

Truss’s words were well-received, especially by those at the conference reeling from the news that Donald Trump had been elected the next US president following an acrimonious election campaign.

Assessing what impact his presidency could have for gender politics in this country, employment lawyer Dame Janet Gaymer told the conference it was ‘down to us to make progress. There will be mood music coming from the US that will be relevant to the debate’.

One sector of the profession which is in a position to drive progress is in-house, the event heard.

Sarah Davis, group commercial legal director at Guardian Media Group, told the conference that she knew several women general counsel, adding that GCs were ‘in a position to influence’. She said: ‘You can say to law firms, “actually, when you pitch to me, I don’t want to see four white men. I don’t want to come into your office and the only people of colour I see are the people serving the tea or on security. If that’s my experience of your firm you’re not going to be the firm for us”.’

Davis told the conference there were many ways to effect diversity change, ‘but that’s a way I’m trying to exercise the small but, in the context of my world, very real power I have’.

Men also have a crucial role to play, as evidenced by a panel session on what they can do to advance equality for women in law. Panel members included Nigel Boardman, a partner at magic circle firm Slaughter and May, and Virgin GC Ian Woods.

Boardman suggested the debate should focus on the issue of covert discrimination, whether conscious or unconscious.

‘I don’t think anyone doesn’t give anyone work,’ Boardman said. ‘I think it’s a question of whether now we’re giving [women] the same sort of work.’

He used the example of a private sale and purchase agreement. Unconscious bias would be to give the woman the due diligence work while the man conducts the task of participating in the adversarial negotiations.

Boardman told the conference that his firm has had ‘unconscious bias’ training. ‘It does help. But it needs repeating and holding to account,’ he said, adding that the firm also has a ‘whistleblowing’ line.

We already know that diversity is on the wider government agenda. Last week a government-backed review stated that by 2020, FTSE 100 companies should have at least 33% of their executive pipeline positions filled by women. Although this is a voluntary target, an earlier government-backed review, led by Lord Davies of Abersoch, led to female representation more than doubling to 26% in less than five years.

The fact that diversity is on the lord chancellor’s agenda is a cause for optimism – assuming she stays around long enough to see change through.