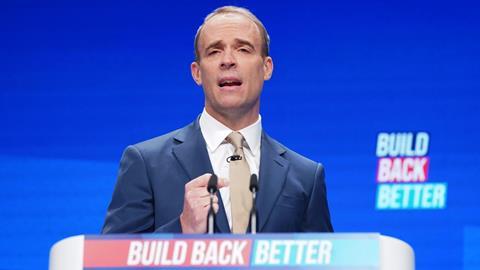 New justice secretary Dominic Raab told the Conservative party conference that he is impatient to get going with a raft of policy initiatives, including ‘justice scorecards’ and cutting court backlogs

Last week’s Conservative party conference gave a firm indication of what kind of lord chancellor and justice secretary Dominic Raab will be. The deputy prime minister told the conference he wants to ‘push the envelope’ and focus on what can be achieved over the next two years, before the most likely date of a general election.

His signature policy is undoubtedly ‘overhauling’ the Human Rights Act, which will be done in this parliament. But what else?

Tackling the court backlog is high on his list of priorities. Statistics released last month show the Crown court backlog has reached a record high. Raab expressed confidence that he can bring the backlog down, with the help of super courts in Manchester and Loughborough, Nightingale courts, a higher limit on sitting days, and remote technology to ‘drive cases forward’.

However, he predicted that it will take a ‘good six months to a year’ to bring the backlog down to pre-pandemic levels.

Raab also wants to interrogate all those working in the criminal justice system. During his first week in office, he asked for ‘granular data’, by locality, on the performance of every component in the system. ‘From the police and reported cases of violence against women, through to the briefs that go to the Crown Prosecution Service, through to cases that are ready to go to trial, through to convictions.’

‘Justice scorecards’ will shortly be produced. ‘There is a lot of nervousness about this but I think it is important,’ he told the conference. ‘We need to make sure those responsible for less performing areas of the justice system are held responsible.’

Another ambition is to turn the Victims’ Code into law, providing ‘benchmarks’ to ensure victims are ‘not an appendix to the criminal justice system’ but at the centre of proceedings and decision-making.

As for Raab? He says there is a ‘wider piece’ around judicial review. ‘We need to look at that in a smart way. We need to carry people with us, lawyers and judges. The case for reform is also powerful.’

He wants to see fewer civil disputes, such as in family and employment, going to court. ‘Court ought to be in many of these areas the point of last resort,’ he said. ‘We should use much more alternative dispute resolution for these things.’

In public law family cases, local authorities need to be supported. ‘I do think local authorities feel like they are going to be hauled over the coals if they intervene too early or too late,’ he said. ‘It seems to have had a chilling effect. We need to trust our social workers on the frontline, empower them.’

One thing Raab has not mentioned yet is legal aid. However, in Manchester he perhaps unwittingly made the case for more investment.

Economic modelling carried out for the Community Justice Fund, ahead of this month’s spending review, showed the Treasury would save £4bn over the next year by supporting free legal advice for the most vulnerable.

Organisations supported by the Community Justice Fund help 483,000 clients a year. The average cost of advice provision is £510 per person, but the average net benefit to the Treasury for each client helped is £8,000. The report says the Treasury would save up to £9.5bn over the next decade. Even a ‘conservative’ estimate sees the Treasury saving £1.34bn.

Investing in preventative work is the one thing that all governments are bad at doing, Raab told the conference, because ‘the Treasury cannot bank the savings. They do not know how to compute it’.

Raab was speaking in the context of reducing reoffending, giving ex-offenders a second chance so they never want to look back and return to a life of crime. However, his argument could easily apply to legal aid. He’ll soon have plenty of opportunity to front up here, in response to the independent review of criminal legal aid, and the Ministry of Justice’s means test and civil legal aid sustainability reviews.

He also indicated that he is in a hurry to get things done. ‘We are going to deliver what the public expect from the justice system in two years’ time, in time for the next general election.’