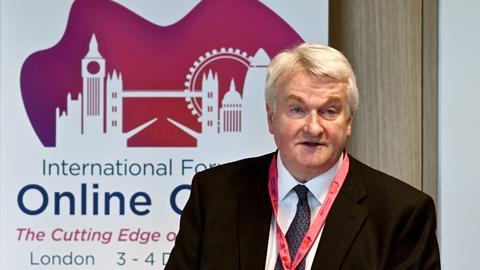 Every proposal for an online court should be asked: ‘Would you be doing this if you had an unlimited budget for conventional courts?’ For most of the experts from 20 different jurisdictions attending last week’s International Forum on Online Courts, the answer was ‘Yes’. In the words of Shannon Salter, chair of the Civil Resolution Tribunal in British Columbia, Canada – seen as a role model for the UK’s own digital court plans – the interesting bit is not going digital but the creation of a blank slate. ‘Let’s seize this chance to rebuild everything,’ she said. ‘Let’s use human-centred design to bring the justice system to the public.’

Susan Acland-Hood, chief executive of HM Courts & Tribunals Service, likewise enthused about ‘humanising’ the justice system: ‘Across the world, technology is giving us the opportunity to rethink, to open up justice,’ she said.

Readers’ comments on the Gazette website suggest that the legal profession at least is highly sceptical. ‘A fad’, ‘beyond a joke’, ‘inevitably lead to injustice’ were among the more temperate responses to a report on the lord chief justice’s address to the conference, in which he spoke warmly of the prospect of a ‘smartphone court’. For hard-pressed professionals working in the cash-strapped courts of England and Wales, it is hard to see online justice outside the prism of austerity cost-cutting.

Speaking at the conference, Bar chair Andrew Walker QC called for a ‘reality check’ on HMCTS’s plans. ‘Will we really do all this? Or will expediency take over?’ he asked of lofty proposals to make online justice fair and transparent.

However, online dispute resolution expert Professor Orna Rabinovich-Einy, of Haifa University, Israel, was one of several speakers to urge critics to look at the reality on the ground rather than some ‘idealised version’ of the justice system. Part of this is the assumption that every litigant will eventually have their day in court. Yet, as attendees from the lord chief justice downward pointed out, for the vast majority of ordinary people this is fantasy. ‘The whole common law legal system is based on the assumption that you will get in front of a judge. We know that’s the wrong assumption 98% of the time, but the whole system is still based on the idea,’ Salter said.

A first step, Rabinovich-Einy suggested, is to change the assumption that putting courts online inevitably means trading fairness for efficiency. ‘A unique quality of digital is that we can enhance both, under appropriate design,’ she said. ‘Part of the problem is we have the form of mindset that the trade-off exists.’

Certainly, as the lord chief justice pointed out, there is no reason why online courts should be any less open than current procedures. As for fairness, Rabinovich-Einy cited research suggesting that apparent biases in sentencing according to defendants’ age and gender disappear when cases are handled online rather than face to face.

However, Walker pointed to a deeper concern: that the race to online justice is engaging the state to a far greater extent in designing the judicial process. Which leads back to the question of what is it all for. A rare declared sceptic in the audience, Penelope Gibbs of charity Transform Justice, accuses the government of driving ahead in the quest for cost efficiency while failing to measure the impact of moving online. ‘Everything in this project has been done backwards,’ she said.

Apart from Canada and the UK, the programme showcased online courts initiatives in Australia, the Netherlands, Singapore, the United States, Portugal, India, China, Denmark and Japan. Drivers for online courts include improving data handling and communication between government, lawyers and parties involved in court cases; and increasing access to justice, while enhancing the experience for all stakeholders.

Catherine D’Elia, of the New South Wales Department of Justice, noted that the state is over three times the size of the UK, and 60% of its 164 court houses are over 100 years old – so replacing paper-based systems, and introducing some online decision-making has brought significant savings in time and resources. Conversely, in Singapore, progress towards online courts has been fast-tracked by a national ‘Smart Nation’ programme. As Judge Toh Yung Cheong explained, the State Court’s move to a 40-storey tower has accelerated progress towards paperless courts and online access.