Leigh Day is attempting to fill a demographic void by advertising for black applicants, renewing debate about how positive discrimination can boost diversity in the legal profession 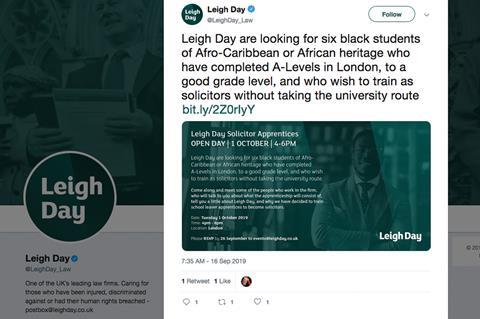 Most firms of a certain size have a policy of positive discrimination, attempting to rebalance workforces to reflect the clients they serve and the changing society around them.

International firm Eversheds Sutherland last week announced new racial diversity targets, with the ambition that 14% of its UK team, including partners, will be from a black, Asian or minority ethnic (BAME) background by 2022. The figure is currently 11.85%. BAME colleagues will represent 10% of UK partners by 2025 (currently 5.33%).

But while many firms seek greater diversity, few, if any, have been as specific as London firm Leigh Day, which is inviting applications for six black (that is, of ‘Afro-Caribbean or African’ heritage) London school-leavers for places on next year’s apprenticeship scheme.

Even at a progressive outfit such as Leigh Day – whose workforce is diverse on almost all measures – the firm says the absence of black staff is noticeable.

‘Because we all agree the demographic is not what we would want it to be, we want to do something positive.’

Leigh Day notes that its policy is lawful. The Equality Act 2010 introduced positive action provisions, under which it is not unlawful to take measures aimed at alleviating disadvantage or under-representation with regard to those with protected characteristics such as age or race.

We made a decision with our BAME committee to increase the number of African-Caribbean and African staff. Because we all agree the demographic is not what we would want it to be

Inviting applicants to take the apprenticeship route is designed to encourage black sixth-form school-leavers into the profession without the need to go to university. Last year social mobility campaign group The Sutton Trust said many universities remain ‘white-dominated spaces’, limiting choices for BAME students. Taking youngsters from school is one way to bypass this roadblock, offering on-site training (courses last a minimum of five-and-a-half-years) rather than the prospect of leaving university in debt.

While Solicitors Regulation Authority statistics show that the proportion of black solicitors broadly reflects society as a whole, there is a sense these figures are more nuanced.

Law Society research shows that the number of practising certificate holders describing themselves as African-Caribbean is 930 – representing 0.7% of PC holders. Men accounted for 259 of those 930.

The University of Manchester’s School of Law has tried to tackle the profession’s dearth of black men. In 2017 it established a pilot bursary scheme to address the obstacles faced by male students of African and Caribbean heritage from disadvantaged backgrounds. This was set up after the law school discovered it had no eligible candidates to put forward for the Freshfields Stephen Lawrence Scholarship Scheme in 2015/16. Investigations showed that there had been no eligible students for four years.

One solicitor, who wished to remain anonymous, says Leigh Day’s intentions are positive, though they criticised the word ‘Afro’ (style guides now prefer the term African-Caribbean). They added that social mobility, diversity and talent are key: ‘If they’re looking at all three together, then that would be really positive. But if it’s just about [bringing] some black people in, changing the “optics”, that’s not enough.’

It would be naive to think this policy is universally popular. One only needs to view the comments section of the Gazette website to find evidence of strong opposition to positive discrimination.

But groups such as the Black Solicitors Network and Noticed are determined to address gaps in representation, increase diversity and inclusion within firms, and raise awareness about ethnic minority issues.

Earlier this year, Noticed ran an event entitled ‘It’s OK To Talk About Race’. This gave delegates a chance to air issues publicly, focusing on marketing the legal profession and encouraging mentoring in schools, convincing future generations they should not be afraid to succeed in the profession. If barriers to black youngsters coming into the law can be broken, the hope is positive discrimination could eventually seem as much of a relic as discrimination itself.