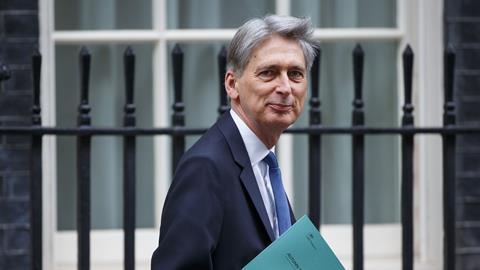 The government’s pledge that motorists will save money from reforms to the whiplash claims process has been cast into doubt within six days by today’s autumn statement. Chancellor Philip Hammond (pictured) announced in his financial review that the standard rate of insurance premium tax will rise to 12% from June 2017.

The increase could affect levels of indemnity insurance paid by law firms, as well as after-the-event insurance taken out to fund litigation.

The rise also casts doubts already over the government’s promise that motorists would enjoy a £40 average reduction in their car insurance as a result of proposed personal injury reforms.

Huw Evans, director general of the Association of British Insurers, described the IPT increase as a ‘hammer blow for the hard-pressed’.

He added: ‘It marks a doubling of insurance premium tax since last year and to claim a consultation on whiplash reforms, which hasn’t even gone before parliament yet, will offset this just won’t cut it.’

Steve White, chief executive of the British Insurance Brokers’ Association, tweeted he was ‘very unhappy’ with the increase and said it ‘continues to penalise those who protect themselves’.

The communications team at insurer LV= tweeted: ‘Hammond says IPT is a tax on insurers – it’s not, it is a tax that consumers have to pay when they purchase insurance.’

Motoring group RAC described the IPT as the ‘stealth tax of our time’ and questioned how many insurance firms would now commit to reduced premiums. Director of insurance Mark Godfrey said: ‘We are also concerned that the government’s whiplash reforms, while welcomed, will not achieve savings for motorists as only a small number of insurers have so far committed to passing the savings on.’

International trade minister Mark Garnier today conceded only ‘some’ firms had actually promised to pass on savings from cutting whiplash damages and raising the small claims limit to £5,000.

The Association of Personal Injury Lawyers said motorists could ‘wave goodbye to the supposed £40 saving’ after the announcement.

National law firm Thompsons Solicitors commented: 'The insurers have attacked today’s announcement of a rise premium tax as ‘outrageous’ - saying the government gives with one hand via whiplash reforms last week and takes with the other in IPT. What arrant nonsense!

'The insurers will, as they always have, simply pass it on in higher premiums without it touching their bottom line. Profits and dividends (and their senior remuneration packages) will remain untouched.

'Insurers conveniently don't mention the straight ‘gift’ of a minimum of £200 million extra profit from the whiplash reforms (as calculated by the government).'

Hammond used his address in the House of Commons to flag up the Ministry of Justice's plans for personal injury reform, promising they would ‘end the compensation culture’ surrounding whiplash claims.