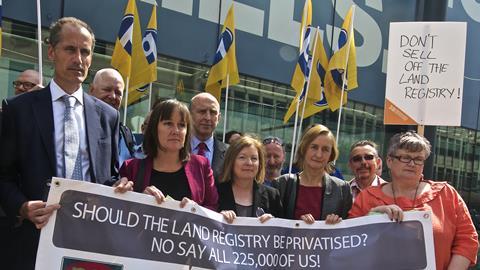 In an unexpectedly firm announcement, the chancellor of the exchequer today laid to rest a long-running plan to transfer the Land Registry of England and Wales to the private sector. The autumn statement published today states: ‘Following consultation the government has decided that HM Land Registry should focus on becoming a more digital data-driven registration business, and to do this will remain in the public sector.’

The consultation, the second in two years, had proposed transferring Land Registry operations to a ‘NewCo’ with a private sector shareholding. The plan attracted strong opposition from the legal sector, including from the Law Society.

First signs that the government was having second thoughts emerged in September when privatisation proposals were dropped from the Neighbourhood Planning and Infrastructure Bill. However until today government sources were insisting that no decision had been taken.

Today’s statement followed the announcement of a contract to create a central register of local land charges data, to be managed by Land Registry. It said that: ‘Modernisation will maximise the value of HM Land Registry to the economy, and should be completed without a need for significant exchequer investment.’

The Law Society welcomed the announcement. Chief executive Catherine Dixon said: 'This decision responds to the representations we, and other Land Registry users, made as to the risks of privatisation, and puts the public interests in this important institution first. We look forward to working with the Land Registry to assist it in delivering its ambitious modernisation plans.'

Eddie Goldsmith, chairman of The Conveyancing Association, said: ‘We are very pleased that within the detail of today’s autumn statement we have the announcement that HM Land Registry will now not be privatised. The CA responded to the consultation on this matter and the vast majority of our members were in favour of the Land Registry remaining in the public sector, so we are clearly very supportive of today’s clarification.

‘Interestingly, the autumn statement suggests that the Land Registry should become “a more digital data-driven registration business” and that “modernisation will maximise the value of [it] to the economy”. This, in effect, is a steer that it should focus on its core role of registration and delivering this through a digital process, which one assumes should include such things as e-signatures.

‘We are fully supportive of moves towards an up-to-date digital conveyancing service. If we’re able to see the Land Registry moving swiftly in this direction then this ambition will be achieved much more quickly.’